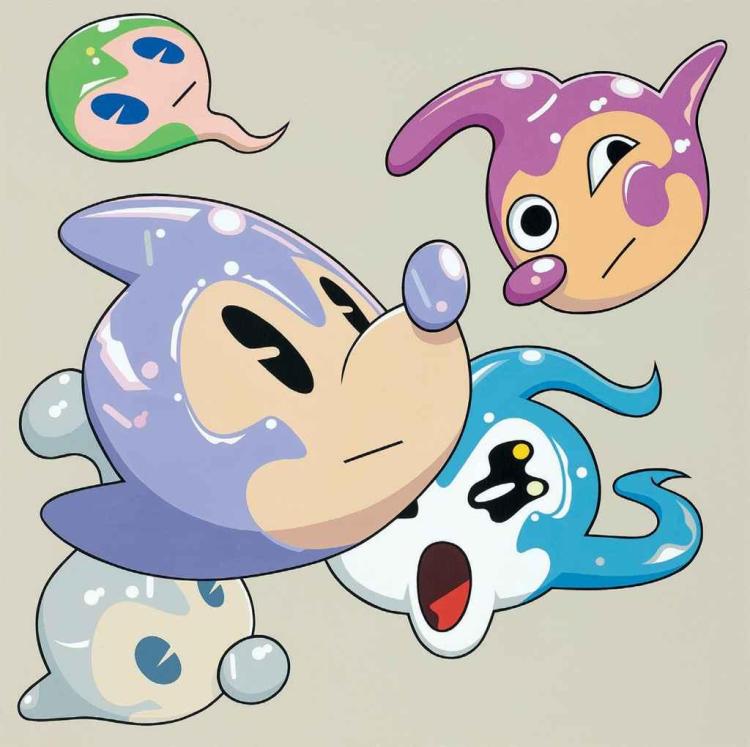 Born in 1967 in South Korea, Lee Dongi obtained a BFA and an MFA in Painting at Hongik University in Seoul in 1990 and 1995. Lee, as the first generation of Pop artists in Korea, creates works characterised by flat planes of colour and graphic images involving a character style, Atomouse, which has long been regarded as an icon of Korean pop art. Atomouse combines "Iron Arm Atom" from Japanese manga and "Mickey Mouse" from Walt Disney. The purpose of the work is to present the effects of emerging globalisation and encourage the viewers to reflect on the chaotic modern world. The amalgam of two cartoon characters simultaneously exist in the realms of the high and low arts, abstract and concrete, substantial and spiritual, and Eastern and Western, reflecting the era of convergence we are living in today. Lee stated, "old media is coming together with new media, developed with developing countries, and everyone's digital technology with everyone else's to create all kinds of new things". -- The Sovereign Art Foundation (SAF) annually organises the most established contemporary art prize in Asia. SAF's aim is twofold: to help elevate the profiles of mid-career artists across the region, and to raise money for disadvantaged children, using the arts as rehabilitation, education and therapy. For the first time, The Sovereign Art Foundation (SAF) and Christie's have collaborated in auction to raise much-needed funds for SAF's Make it Better (MIB) project; an initiative that provides art workshops to disadvantaged children in Hong Kong. Until now, the MIB project has largely focused on providing weekly workshops to the Society for Community Organization (SoCo) and the Hong Kong Society for Protection of Children (HKSPC), however this year SAF aims to greatly expand the project and hire full time art therapists and teachers to work with the children. To facilitate this expansion, Christie's has generously offered SAF the platform through which to raise funds and ultimately support the programme. In this collaboration, selected Sovereign Asian Art Prize finalists and winners have very generously donated artworks to a meaningful March auction at Christie's, with proceeds feeding directly back to The Sovereign Art Foundation's Make It Better project. The selection of contemporary works being auctioned ranges from unique sculptures, to digital prints, to a knitted shredded body container crafted from an authentic collection of Tin Tin Comic Books. Artists including Movana Chen, Debbie Han, Dongi Lee, Man Fung-Yi, MAP Office and JeongMee Yoon have contributed to the project, further cementing their relationship with The Sovereign Art Foundation and aiding its many charitable art projects across the region.