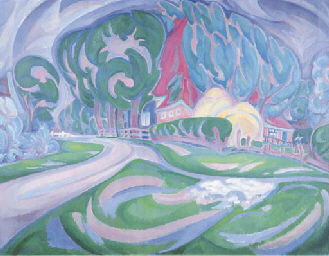 Landweg in Bergen signed and dated 'Leo Gestel 1912' (lower left), and dated again and inscribed 'Bergen' (on the reverse), and signed again and numbered 'cat.no. 1 - landschap' (on the stretcher) oil on canvas 110.5 x 143.5 cm. PROVENANCE W.F. Selderbeek, Soestdijk, cat.no. 108. Stedelijk Museum, Amsterdam, inv.no. B 1171 (on loan until 1954). An Gestel, widow of the artist. S. Josefowitz, Lausanne, late 1950's. Singer Museum, Laren, inv.no. 95-8-1 (on loan until 2002). LITERATURE Exh.cat. Frans Halsmuseum/Noord Brabants Museum, Leo Gestel als modernist; werk uit de periode 1907-1922, 's Hertogenbosch 1983, p. 13. M.E.Th. Estourgie-Beijer, E. Heuves, D. Colen, Leo Gestel. Schilder en tekenaar, Zwolle 1993, p. 38 (col.ill), no. 53, p. 138. I.M. de Groot (red.), Rond 1900. Kunst op papier in Nederland, Zwolle 2000, p. 161 (ill.). EXHIBITION Dsseldorf, St„dtische Kunsthalle, Vom Licht zur Farbe 1886-1912, 1977. Laren, Singer Museum, Leo Gestel, 28 November 1993 - 30 January 1994, no. 53. NOTES 1911 and 1912 were exciting years in the Dutch art world. In the fall of 1911 the first exhibition of important French cubists, like Picasso and Braque, was held in the 'Moderne Kunstkring' in Amsterdam. Only one year later another sensational event took place: Futurism was introduced in the Netherlands by Herwarth Walden. These foreign movements definitely had their influence on Dutch modern art. Equally important for the artists Leo Gestel and Jan Sluijters was their visit to Paris in the spring of 1911 with the purpose of studying French cubism. These years were crucial for Leo Gestel's artistic development. The luminist years (1909-1910) of hesitation were left behind. After an earlier visit to Paris in 1910, Gestel was influenced by the fauvist work of Kees van Dongen; an influence that did not satisfy him for long. Inspired by his time and by the many foreign examples, Gestel would finally find the possibility to fully realise his potential from 1911 onwards. He was to become one of the three most important Dutch modernists. After 1914 Gestel would turn away from avant-garde painting. During a summer stay in Bergen in 1912 Gestel explored the possibilities of representing 'space', after having spiritualized the elements 'colour' and 'form' in the previous year. During the 'Moderne Kunstkring' exhibition Gestel had seen how the French cubists create space by using a structure of overlapping planes and stereometric forms. Landweg in Bergen was the result of these impressions. Initially Gestel would only apply his cubist dissection of forms to seperate parts of a work. Portraits for instance with only face and hands in angular shapes against a decorative flower pattern, only using the cubist form language to express the psyche of the portrayed. In Landweg in Bergen the artist applied the cubist principles on the entire painting for the first time. It can therefore be seen as a keywork in Gestel's development from luminism, through fauvism to his so called Mallorca cubism of 1914. The intense unusual colours of this work seem to be a continuation of the spiritualized colour schemes of his luminist period from around 1909-1910, when he used the light and colour which he had experienced, but not objectively perceived. It was his intention 'to work more sensitively and sacrifice the subject in order to paint in a more spiritual way' (N.H.Wolf in A.B.Loosjes-Terpstra, Moderne Kunst in Nederland 1900-1914, Utrecht 1983, p.91) Robert-Jan te Rijdt writes about the preliminary charcoal drawing of Landweg in Bergen (fig.1; private collection):'As a basis the work has a traditional landscape with a curvy road leading the eye into the distance. The open foreground has a slightly curving pattern of flowing lines and tones, in which a group of toad-stools is slightly detonating. Behind all this, almost as on the back curtain of a stage, the edge of a wood majestically rises with trees that seem to be driven up against each other. The vegetation is represented in expressively abstracted forms. The large size of the work gives it the effect of a grandly felt vision. The shape of the trees and the composition as a whole seem to tell a story through their abstract forms, like a musical composition communicates through dynamics, rhythm and timbre.'( Rond 1900 Kunst op papier in Nederland, p.161).