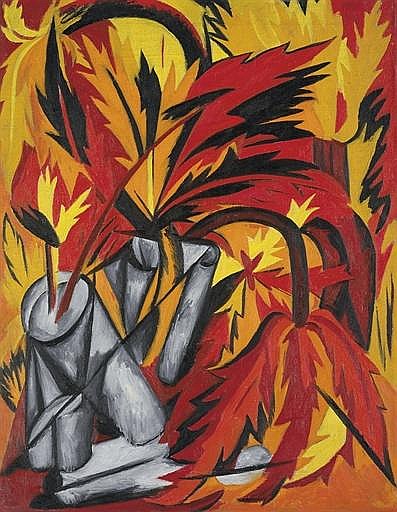 PROPERTY FROM THE HOH COLLECTION

On occasion, Christie's has a direct financial interest in lots consigned for sale which may include guaranteeing a minimum price or making an advance to the consignor that is secured solely by consigned property. This is such a lot. This indicates both in cases where Christie's holds the financial interest on its own, and in cases where Christie's has financed all or a part of such interest through a third party. Such third parties generally benefit financially if a guaranteed lot is sold successfully and may incur a loss if the sale is not successful.
The present work has been requested for the forthcoming exhibition, Futurismo 100, to be held at the Museo di arte moderna e contemporanea di Trento e Rovereto from 17 January to 7 June 2009.

Natalia Goncharova's Les fleurs, painted circa 1912, is an important painting marking a major breakthrough in Russian avant-garde art. Les fleurs represents an amalgamation of contemporary trends in European art, anticipating the full explosion of Rayism, the radical method of representation Goncharova developed together with her life-long partner and collaborator Mikhail Larionov, which led to a significant shift in her work. By 1912, Goncharova had begun to move away from the Neo-Primitivist style that had previously marked her work, towards an art notable for its structural compositions, loud yet harmonious palette and fractured sense of space. Although Les fleurs is based on an observation of nature, Goncharova manipulates this simple still life subject into a superb exploration of composition and form, in which pictorial components are shaped by an inner impulse independent from reality.

As one of the first artists in Russia to defy academic traditions and reject conventional ways of depicting the real world, Goncharova's drive to forge new techniques of painterly expression cut a path towards pure abstraction. In this painting, impressions of the external world are gathered and reconfigured at will to build an image of flat planes and intangible spatial forms. Indeed, Goncharova stipulated her pictorial ambitions in an album from the same period, underlining the resolve behind her abandonment of naturalistic form: 'Do drawings of things, the landscape, people just as they appear at a given moment in your imagination; fear nothing, no deformity of any kind, no fabrication, no fantasy. Try out various styles and methods, emphasizing first one part, then another, now movement, now the very position of the object itself in space and its relationship to others. Change them according to your imagination and instinct, urge yourself to do it precisely that way or in accordance with the idea that you have worked out consciously in your own mind' (N. Goncharova, quoted in exh. cat., Amazons of the Avant-Garde, New York, 2000, p. 310). In this way, Goncharova indicates that each new work is an attempt to realize an ever-changing goal, making the foundation of her art the process of painting itself.

Although Goncharova had started her artistic career in 1901 as a sculptor under Pavel Trubetskoi at the Moscow School of Painting, Sculpture and Architecture, she soon lost interest in the plastic arts and turned to painting under the encouragement of Larionov, 'because the opportunities for expression in sculpture are too restricted. Sculpture cannot convey the emotional atmosphere of a landscape, the touching fragility of a flower or the tenderness of a spring sky' (Jean Maréchal, Pourquoi Gontcharova renonça à la Sculpture, in Le Petit Parisien, Paris, 23 June 1937). This urge to convey emotional content was stimulated by an influx of modern art from the West into Moscow. The two great collectors Ivan Morozov and Sergei Shchukin owned astonishingly forward-looking collections of Gauguin, Matisse and Picasso, and these were made readily available to students in 1909. In addition to this, Larionov's exposure to modern artists during his travels to Paris and London in 1906 corresponded with a traceable evolution in his own style and in Goncharova's as well, suggesting his observations were significant for them both. Goncharova's desire to extend upon the latest achievements in art led her to combine the lessons of her Western contemporaries with the expressive power of vernacular folk art, including lubki, the brightly coloured Russian prints that completely disregard single point perspective.

Goncharova's ceaseless reevaluation of painterly possibilities meant she did not develop one signature style, but many, and this experimentalism placed her firmly in the epicenter of the Russian avant-garde. During the years of 1912-1914, the painter developed more geometrically controlled compositions that reveal her interest in decorative form and the influence of both cubism and futurism. These aesthetic ideas can be seen to come together in Les fleurs, in which the two cylindrical vases in the foreground share the spatial relativity of analytical cubism, which was active in Paris at the time. The objects are fragmented into overlapping, monochromatic planes that show shifts in perspective, thereby introducing a temporal quality to the static image, whilst simultaneously emphasizing the canvas's two-dimensionality.

Goncharova was profoundly aware of the psychological effects of colour and this sense of flatness is further highlighted in the blooms, where tonal modelling is replaced by pure, fiery hues. Here, she has used the red and yellow tones prevalent in Russian icon painting to deliberately destroy any sense of optical calm, creating pulsating and dramatic rendition of a seemingly innocuous subject. The heated colours and broken forms activate the picture plane, instilling Les fleurs with a sense of dynamic movement akin to the work of the Italian futurists. Goncharova and her contemporaries were familiar with the strategies and techniques of the futurists at its inception and even printed a translation of Marinetti's 'Futurist Painting: The Technical Manifesto' in the journal for the 1912 Union of Youth touring exhibition, as well as producing a number of their own. Yet, Goncharova would acknowledge no authorities, claiming she had renounced the 'trivial and insignificant' influence of the West in order to 'draw my artistic inspiration from my country and from the East, so close to us. To put into practice M.F. Larionov's theory of rayonism, which I have elaborated (painting based only on painterly laws). To reduce my individual moments of inspiration to a common, objective, painterly form' (see J. Bowlt (ed.), Russian Art of the Avant-Garde, London, 1957, pp. 55-58).

Rayism was first seen in public in 1912 and engaged emerging theories in modern physics to depict forms as if they were shaped by intersecting rays of light. Les fleurs was created alongside a series of rayist flower paintings, some of which were displayed for the The introduction of these refracting rays can be seen radiating from the centre in Les fleurs, their diagonal black lines shattering the picture plane much like the futurist's 'lines of force'. Rayism allowed Goncharova to focus on formal aspects of colour, shape and texture and was supported by the manifesto she and Larionov published to announce the concepts behind the practice: 'The picture appears to be slippery; it imparts a sensation of the extratemporal, of the spatial. In it arises what could be called the fourth dimension, because the length, breadth, and density of the layer of paint are the only signs of the outside world. …With this begins the true liberation of painting and its life in accordance only with its own laws, a self-sufficient painting, with its own forms, colour, and timbre' (M. Larionov & N. Goncharova, 'Rayonists and Futurists: A Manifesto, 1913', in J. Bowlt (ed.), Russian Art of the Avant-Garde, London, 1957, p. 87). In foregoing pictorial illusion, Goncharova depicts the jagged leaves and faceted vessels in Les fleurs as abstract elements whose interrelationships are determined by harmonies in colour and form.

Les fleurs was produced at the height of Goncharova's greatest period of creative activity, in which she gained recognition in the West as a participant in the groundbreaking 1912 shows of Der Blaue Reiter in Munich and Roger Fry's Second Post-Impressionist Exhibition at the Grafton Gallery in London. The painting was later included in the first Goncharova/Larionov retrospective in Europe at the Galerie Paul Guillaume in Paris in June 1914, by which time their focus had shifted from studio painting into stage design and the couple were about to abandon Russia for good. Shortly after, the pictures travelled to Berlin to be shown at Herwarth Walden's Der Sturm gallery, but the exhibition was prevented from opening due to the outbreak of war. Whilst in Paris, Goncharova won the friendship and support of Guillaume Apollinaire, who, in his contribution to the exhibition's accompanying catalogue, declared that her art 'commands an aesthetic in which the great and intellectually satisfying truths of today's scientific art are combined with the appealing subtleties of Oriental art. To this, Mme. Goncharova has added, first, the modern harshness contributed by Marinetti's metallic futurism and, second, the refined light of rayism, which is the purest and newest expression of contemporary Russian culture' (cited in L. Breuing (ed.), Apollinaire on Art: Essays and Reviews 1902-1918, Boston, 1972, p. 413). This observation of Goncharova's eclectic appropriation and assimilation of modern Western art models, and her understanding of indigenous art and culture is clearly visible in Les fleurs, which boldly proclaims an innovative creative synthesis of aesthetic concepts, whose essence is firmly rooted in the East.