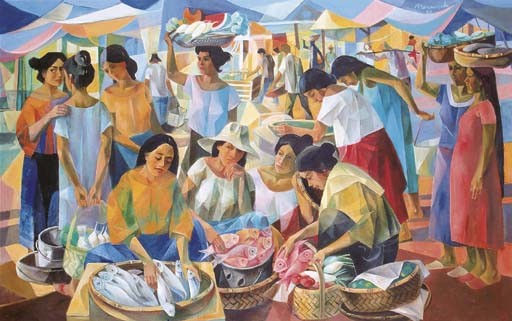 The Philippines was a rich source of inspiration for Manansala. His brand of cubism incorporated all aspects of indigenous life to great advantage. His choice of subject in this painting includes the quintessential Filipino requisites - foods, sounds and colours - an instant appeal to the senses. 'During town fiestas or other feastings, the sense of abundance and fullness gets displayed in all its dimensions. Food is served, in quantities if possible, which would make the table sag. Food is measured not in terms of plates but in the quantity of cattle, hogs and fowls cooked. Food is not the only measure of fullness. In a town fiesta, even silence must be filled. Seven brass bands must march around town. One brass band is a terrible blow to the prestige of the hermana mayor. If there are jeepneys or buses around, only a stereo at full decibel would match the merry making mood. Space must likewise be decked with colours. Bunting of multicoloured strips of papel de Japon are strung across streets - on trees, lampposts and houses. To be able to fill every space, anything empty, is a measure of prestige as well as wealth.' (Rudolfo Paras-Perez, Manansala, Plc Publications, Manila, 1980, p. 193-194.) Suffice to say, this painting fulfils all of the above, albeit in a less festive mood but definitely in an equally bustling environment.

The familial quality of this work fosters an immediate affinity with the viewer. The entire scene has a universal slant to it - it can be recognized as a scene out of any country in the world. Hence then, 'There is an almost reverential attitude towards the object in Manansala, a definite reluctance to break or fragment the image beyond cognition.' (Rudolfo Paras-Perez, Manansala, Plc Publications, Manila, 1980, p. 195.) The subjects chosen are accessible to the (Filipino) community at large which the artist felt was an intimate disclosure of local life. He respected the relationship and hence was available a lesser need to distort the images.

In addition to this domestic nuance, women were a particular favourite of Manansala's subjects. 'The women in Manansala's world may walk and live in the city but their values remain pastoral. When the women are not rearing children, they are busy mending a net, threading flowers or rushing to the market in order to barter something. Or, during the leanest hours of World War II, queuing for rice and learning the latest gossip in town. They could be fish vendors patiently seated in some unspecified talipapa, if already grandmothers sitting by the door of Quiapo church selling candles.' (Rudolfo Paras-Perez, Manansala, Plc Publications, Manila, 1980, p. 38.) Manansala's women bear a solid spirit of resilience exuding quiet energy and presence. This scene is an instance of a situation which they take on a presiding role. The essence of a market scene is the domination of activity - in significance, of the ladies talking. Be it mere neighbourly courtesies (c.f. two ladies carrying baskets of goods on the extreme right), bartering exchanges (c.f. lady in yellow choosing fish on the lower right) or even the quick gossip session (c.f. ladies in the extreme left), it is a full and busy scene with a myriad of emotions worn on the faces of the ladies.

'Manansala plunged into Cubism but did not let it overwhelm him. The austere, sometimes highly intellectualized Cubist style emerged from the hands of Manansala as something free and capable of sensuousness. Manansala's objects and images almost fill the canvas. Fruits, fishes and objects abound, at times giving the impression of having been flung pell-mell on the canvas. Yet everything coheres.' (Rudolfo Paras-Perez, Manansala, Plc Publications, Manila, 1980, p. 195.) It is an appropriate scene to be realized with this style, the continually shifting planes trademark of Manansala's style is in perfect harmony with the rapid pace of events in the market place. People are talking, walking, gesturing, pushing etc. at varying speeds. Like a sparkling diamond, the multi-faceted work shows of the sharp angles of light brilliantly through Manansala's fine gradation in colour tones and hence envelopes the work in a magnificent coat of colors. This vibrance of colour and clever play of shadow lends the work a transparency reminiscent of Manansala's celebrated watercolour masterpieces. This lightness is also effective in emphasizing the swift movements occurring in the scene.

'Like the multifaceted planes in Cubism or the oriental idea of a dynamic wheel with a constant centre, every painting carries the unifying force of his sensibility' (Rudolfo Paras-Perez, Manansala, Plc Publications, Manila, 1980, p. 145.) This sensibility being Manansala's acute sensitivities to his chosen subjects and the reverent manner in which his style has portrayed them.