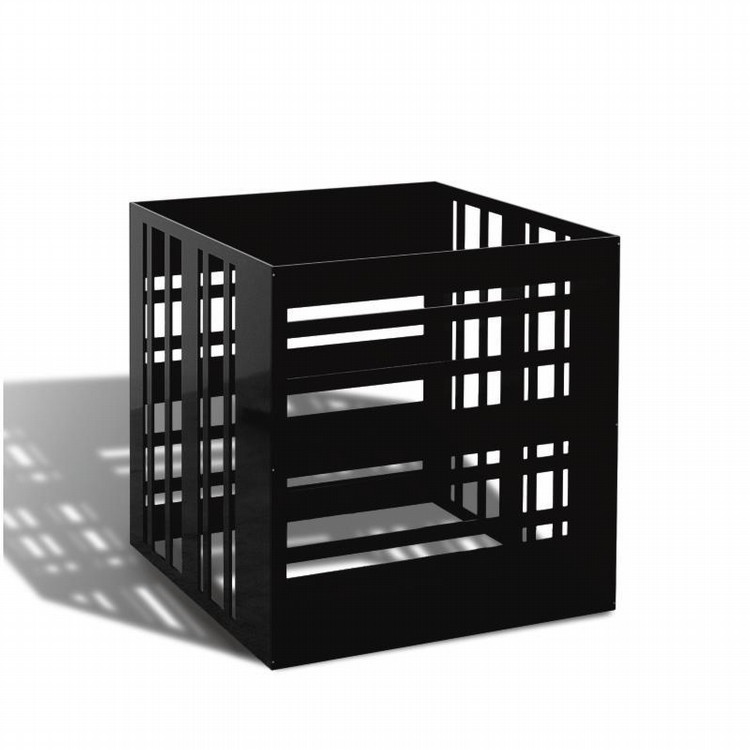 Donated by the artist, courtesy of Esther Schipper, Eva Presenhuber and Corvi-Mora

This sculpture balances lightness and mass, opacity and transparency, rational austerity and beauty. Its unreflective black colour contrasts sharply with the brightness of a white wall to etch itself onto our field of vision. Four out of six sides of this perfect cube are made from vertical and horizontal bands. Made of matt-coated metal these elegant bars provide the structure for the cube while also making it diaphanous. Their flatness gives this three-dimensional form a two-dimensional, graphic quality; this pattern of irregular stripes is reminiscent of a bar code.

British artist Liam Gillick transforms sculpture into object, environment and situation. He is renowned for two ongoing series, called 'What If Scenarios' and 'Discussion Islands' that comprise multi-coloured architectural installations. He is also known for his books, films and artefacts. Gillick is part of a group of artists, including Dominique Gonzalez Foerster, Pierre Huyghe, Philippe Parreno and Rirkrit Tiravanija, who also work collaboratively. They regard the viewer as a participant and the space of art as a place for debate. This approach inspired an influential interactive exhibition called Utopia Station at the 50th Venice Biennale in 2003. Gillick's work forms part of the Tate Collection and has been exhibited around the world.

Liam Gillick's work draws on the contemporary, urban landscape. Although the architecture of our time has grown from the utopian ethos of Modernism, it is also enthralled to consumerism and inscribed by the power of the multi-national. This paradox is central to Gillick's work.

The open cube placed directly on the floor evokes the work of the minimalist sculptor, Donald Judd. Like Judd, Gillick's work is also made in factories. But where Judd insisted on the literal, non-associative quality of industrial materials and geometric forms, Gillick's work is a reflection on our society.

The title of this piece plays on the way colour-charts, used for paints or inks, define the range available in one colour. Instead of a name such as 'charcoal black' Gillick's title incorporates a truth about manufacturing. End of Production Black reflects the death of industry in the west, with its migration to third world countries where labour is cheap. His vision is not however, a bleak one. In his artist's writings, Gillick picks up on the jargon of business and bureaucracy and reinvests it with real possibility. Perhaps this elegant sculpture with its fusion of delicacy and strength, horizontal and vertical elements, darkness and light, can also be thought of as an actual 'think tank'. IB