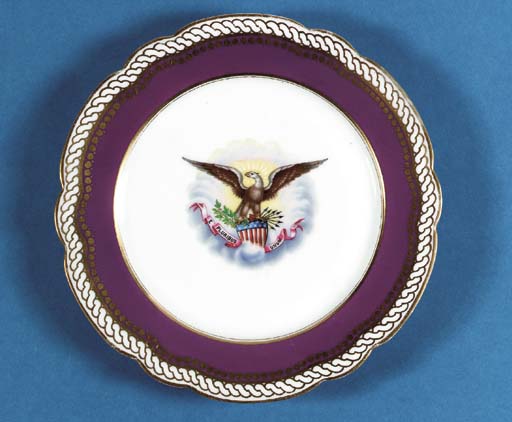 A PLATE FROM THE LINCOLN STATE DINNER SERVICE

White porcelain, 9 in. diameter, shaped edges. Hand-painted in New York by Edward Lycett: in the center, a large American eagle surmounting a stars-and-stripes shield and clutching olive branch and arrows, with "E pluribus unum" legend on a pink, set against a rising sun seen through clouds; border of "Solferino" purple with outer edge dotted with gold circles, additional gilt "Alhambra" border on white ground (a moorish motif, widely used at the 1851 Crystal Palace in London), the underside blank (indicating that was part of the original order, not one of the replacements ordered during the Grant and Arthur administrations). Aside from slight wear to the gold border at extreme edge, and a repaired chip at border, in fine condition.

A plate from the famous State Dinner Service ordered by Mrs. Lincoln early in her husband's first term in office. Just two months after Lincoln's inauguration--not long after Confederate guns fired on Fort Sumter--Mrs. Lincoln spent several days in New York, shopping for fittings for the White House. The state dinner service made for Franklin Pierce and still in use, was clearly inadequate for their purposes. On May 16, noted the New York Daily Tribune, "Mrs. Lincoln...visited the establishments of Lord & Taylor and Messrs. E. V. Haughwout and ordered a splendid dinner service for the White House in 'Solferino' and gold with the arms of the United States emblazoned on each piece." (That same afternoon, she ordered mantle ornaments for the Blue and Green Rooms, and glassware, see following lot.)

Printed Books and Manuscripts including Americana