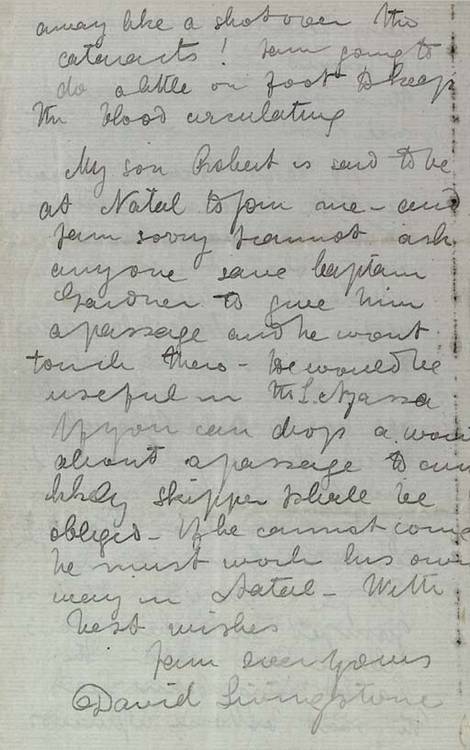 IN THE FINAL STAGES OF THE ZAMBEZI EXPEDITION, LIVINGSTONE WRITES HIS FORMER SECOND-IN-COMMAND

Livingstone writes three months after Kirk departed the Expedition. Dysentery attacked the party, and Kirk and Charles Livingstone were ordered home; but when they were about to start David Livingstone fell ill and Kirk remained till he was convalescent. Kirk finally left on 9 May 1863. Livingstone offers praise of Kirk's services, telling him that he "did all that a man could do in the circumstances" and that his departure was wise: "You were quite right to get off by the earliest safe opportunity--that dying by inches--slow & sure poison which I saw in the Crew of the Hamburgh vessel was just what you describe in Saunders..." Livingstone writes in a generally warm and complimentary tone throughout, even though Kirk, and most of the Zambesi party, had fallen out with Livingstone at this time.

Anger with recent events, however, is also very much on Livingstone's mind, most notably "the humiliation," in his words, of having the dispatch from Lord John Russell recalling the expedition "subjected to Missionary and other gossip at the Cape before we knew its contents... I suspect the Governor of the Cape is the guilty person... Adams came up and hailed the ship with 'no more pay for you Paoneer [sic] chaps-- I brings the letter as says it'... notwithstanding the curteousness of its style my companions & self had been subjected to very unmerited humiliation--The Despatch was sent open to the Cape Governor and I suspect that he to gain a little popularity with high church folks had sent it to the bishop--I shall not call on the Governor though I go to the Cape and will take further public notice of the indignity if no apology is given-- I don't say a word to the bishop about it but will mention D r Stecre's bad manners--Earl Russell says 'he will be glad to learn that any of the gentlemen of the Mission have profited by my suggestions & experience' &c &c--as they know this I shall use it as a text."

Russell's recall caused Livingstone great resentment, and the explorer's ire is unleashed to Kirk: "In reference to the remark in the Despatch [by Russell] that the Gov t as yet possessed but scanty information about the resources of the country--I mention the ample materials you have sent or taken to the Gov t Museum at Kew and that there is no instance on record of valuable information being arranged without consulting Herbaria and authorities--& refer to Sir William Hooker as to whether the materials are not as ample for the illustration of the natural productions of the country as ever came out of a barbarous country & from a vessel in which nothing without incessant trouble could be preserved."

Livingstone goes on to provide news of the Expedition and offers advice to Kirk. He notes that Rae is progressing rapidly with the rebuilding of Lady Nyassa (the boat had been burned by the Mañanja three months before) and suggests that Kirk should apply for the Consulship of Zanzibar: "In a few years you could retire with a competency & have done good service in the mean time." He describes a mission upstream which he launched after learning of his recall: "We left to carry a boat past the cataracts... & had it up at Malango when in the water the Makalolo reported that it would require now to be carried--I called all hands to do this when five Shupanga men... jumped in to shew how clever they were--the next thing I saw was the boat bottom upwards away like a shot over the cataracts! I am going to do a little on foot to keep the blood circulating."

Kirk's service to Livingstone followed a short service in the Crimean War, with his spare time spent studying botany. "On his return to England in 1857 he gave up the idea of teaching natural history on being appointed to accompany David Livingstone, as physician and naturalist, on his second Zambezi expedition. For five years (1858-1863) Kirk was Livingstone's chief assistant and proved an unqualified success. The expedition first explored the Shiré valley and highlands, and made the earliest investigation of Lake Nyasa and its surroundings; the Zambezi was then ascended as far as Sasheke, and a thorough examination made of the Victoria Falls. On the return journey Kirk was nearly drowned (November 1860) in the Kebra-basa rapids, and early in 1863 he was attacked by dysentery and ordered home. His botanical collections were considerable and laid the foundations of the Flora of Tropical Africa which was published under government auspices 1868-1917" (DNB). Kirk did take up the post at Zanzibar, and his service there earned him a knighthood. It was as consul that Kirk met and argued with Stanley, whose How I Found Livingstone accused Kirk of neglecting his "quondam companion."