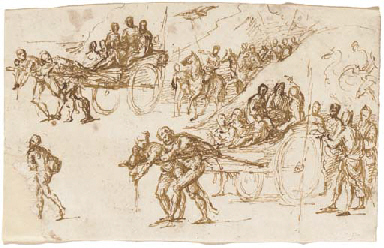 Alternative studies of figures pulling a triumphal car, with attendants and horsemen numbered '105' pen and brown ink, watermark A (cf. Briquet 7922, Italian, circa 1500), the lower left corner irregularly cut 6 3/8 x 101/4 in. (163 x 260 mm.) LITERATURE M. Faietti, 'L'influsso della cultura Fiorentina nell'evoluzione stilistica del disegno bolognese tra la fine del Quattrocento e gli inizi del Cinquecento', in Elizabeth Cropper ed., Florentine drawing at the time of Lorenzo the Magnificent, Villa Spelman Colloquia 4, Florence, 1992, p. 209, note 39. NOTES The attribution to Lorenzo Costa has kindly been confirmed by Everett Fahy in a letter dated 21 January 2002. The drawing can be most closely related to two horizontal studies of figures in procession formerly in the C.R. Rudolf Collection, sold Sotheby's, London, 21 May 1963, lots 5 (for which the attribution was originally suggested by Meder and Benesch) and 6 (now in the J.B. Speed Museum of Art, Louisville, Kentucky). Marzia Faietti suggests that the present drawing is a version of the group to the right of lot 5 in the Rudolf sale, and dates both to Costa's activity in Mantua after 1506, M. Faietti, op. cit., p. 209. Despite Faietti's suggestion that the present drawing dates from late in the artist's career, it is of note that the motif of processions with chariots moving between low hills was used repeatedly by Costa in his frescoes of The Triumph of Death and The Triumph of Glory for the Bentivoglio Chapel in San Giacomo Maggiore, Bologna, painted in 1488-90, R. Varese, Lorenzo Costa, Milan, 1967, pls. III-IV. Further comparable drawings, in similarly strong pen and ink and without wash, are in the British Museum (A.E. Popham and P. Pouncey, Italian Drawings in the Department of Prints and Drawings in the British Museum, The Fourteenth and Fifteenth Centuries, London, 1950, no. 44, pl. XXXIX), at Christ Church, Oxford (J. Byam Shaw, Drawings by Old Masters at Christ Church, Oxford, Oxford, 1967, no. 862, pl. 526), in the National Gallery of Canada, Ottawa (A.E. Popham and K.M. Fenwick, The National Gallery of Canada, Catalogue of European Drawings, Toronto, 1965, no. 4) and at the Pierpont Morgan Library, New York (Fairfax Murray publication, I, 1905, pl. 42, as Bramantino).