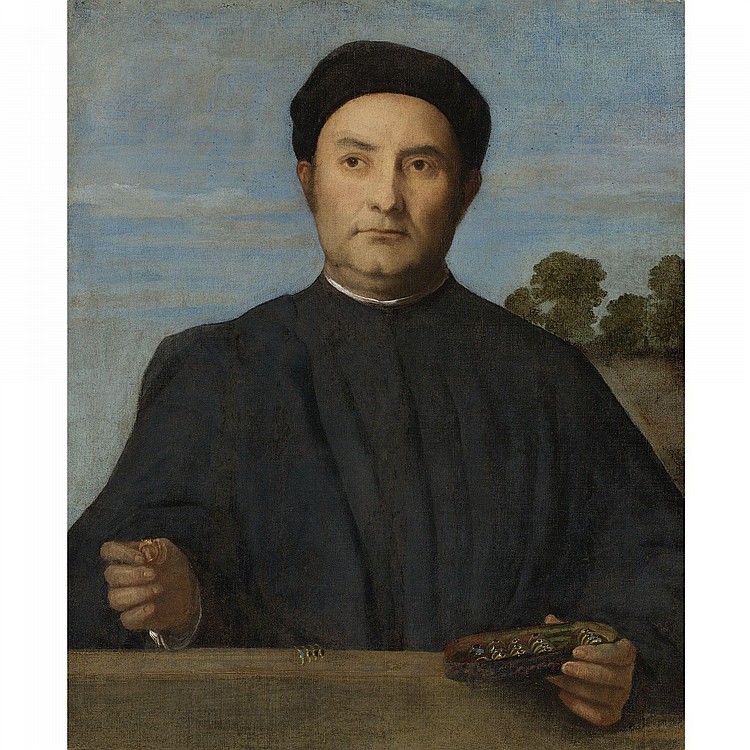 Of Lorenzo Lotto's varied and rich output, it is perhaps his portraiture that is most resonant with a modern audience. Over forty portraits by the artist have survived, and they span the entire length of his career; early works, such as the stunning Portrait of Bernardo de Rossi (Capodimonte, Naples) betray Lotto's training in Venice, while his later portraits painted in Bergamo, Venice and Treviso all show his familiarity with and reaction to the developments of Raphael, Titian and other contemporary artists. What does not vary, however, is Lotto's insight into the psychology of his sitters, very often drawn not from the highest, most aristocratic stratum of society, but from the wealthy professional classes to which—it may be argued—he himself belonged.

This Portrait of a Goldsmith exemplifies these tendencies in Lotto's art. With a landscape as a backdrop, a man dressed in the black cassock of his class with a matching black biretta stands behind a wall.(1 ) He holds in his left hand a case of rings, one of which he holds out to the viewer with his right hand; four more rings rest enticingly on offer on the ledge before him. The use of a wall in front of the sitter as a spatial device was a common conceit in Northern Italian pictures of the moment, but the picture would appear also to reflect an awareness of Raphael and other central Italian artists. Scholars have unanimously dated the picture to the artist's early career, although there has been not been a consensus on the exact date of the picture. Berenson considered it to be a work produced circa 1515, probably when the artist was in Bergamo, although others have preferred a slightly earlier dating (Banti 1509-12; Boschetti, slightly before 1515). Zocca (see below) suggested a rather precise dating of 1509, which was accepted by Pallucchini.

As with many of Lotto's portraits, the exact identity of the sitter cannot be confirmed with absolute certainty, although his profession is clear from the rings that he proffers. It is not the only portrait of a jeweler that Lotto painted; one of his most celebrated portraits is the famous Portrait of a Goldsmith from Three Positions (Kunsthistorisches Museum, Vienna; fig. 1), later in date, but depicting a man of the same métier and holding a very similar box of rings.(2) Emma Zocca (see literature) was the first to suggest that the sitter in the present portrait might be Giovanni Pietro Crivelli (1463-1552), a prominent Milanese jeweler then resident in Rome. Lotto knew Crivelli, and in fact, in a document dated the 18th of September 1509, the jeweler acted as a guarantor for a payment the artist was due to receive from the papal treasury for work on frescoes in the Vatican apartments.(3) Stylistically, a dating to Lotto's short Roman sojourn would make sense, and a comparison with a known portrait of Crivelli on a bronze medal (fig. 2) confirms the likeness to the jeweller. Although Crivelli is shown in profile, he wears the same simple gown as in the portrait, and the facial type does correspond closely enough to make the identification highly plausible. Certainly Crivelli was an important enough figure in Rome to warrant the young artist's attention, in addition to any financial ties between the two. Crivelli had come to Rome from Milan before 1508, and remained active there until his death, both as a banker and as a goldsmith. His first home he gave over to the municipal government to house a civic pawnshop, and nothing speaks more to his success in the papal city than the splendid new home he built to replace it, the Casa Crivelli, still standing in Rome.(4


)1. In the mid 1950's the painting was cleaned and a copse of trees at the left of the composition that had been added later were removed.
2. Lotto appears to have had an affinity for jewelers, goldsmiths and their wares. He counted a number of them amongst his friends, and his account books mention them as well. His will describes his collection of cameos and jewelry (see P. Humfrey, Lorenzo Lotto, New Haven and London 1997, p. 110, and Appendix C, p. 181).
3. The exact involvement of Lotto in this project is unclear, and no extant work in the Stanze by him has been isolated. However, he did receive a payment in early March of 1509 of 100 ducats for work there; he is named on the 7th of the month amongst a number of artists as "Laurentio pictor pigenti in camera nostra", and then was issued a receipt the following day, made out to "magister Laurentius Lottus de Treviso".
4. At via de'Banchi Vecchi 22/24. For descriptions of the building and the decorative schemes on its exterior, please see D.Gnoli, "La casa di Giampietro Crivelli in Roma", in Archivio Storico dell'Arte, volume IV, 1891, pp. 236-242, 287-290; and G. Clarke, "Paul III and the Façade of the Casa Crivelli in Rome", Renaissance Studies, Volume 3, Number 3, September 1989 , pp. 252-266.