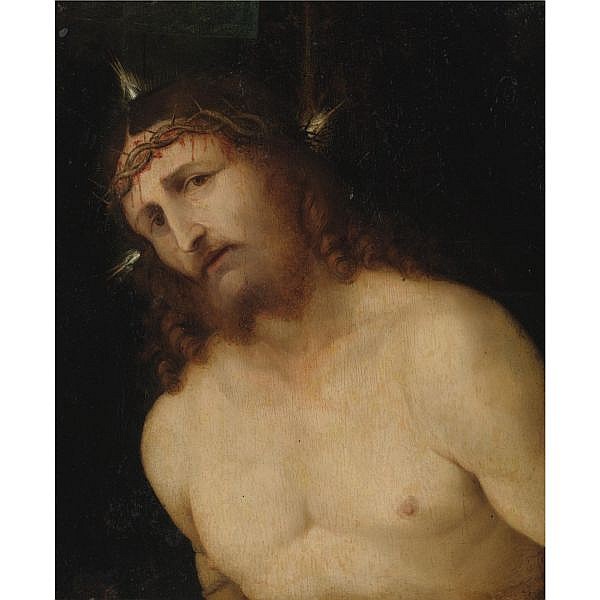 Probably in the collection of the Dukes of Mantua;
Probably acquired from the above, via the dealer Santi Rota, in 1724 by Field Marshal, Count Johann Matthias von der Schulenburg (1661-1747), and certainly in his collection by 1736;
Sent by the above to his residence in Berlin, 12 September 1736;
By descent to his nephew, Adolph Friedrich von der Schulenburg;
Thence by descent until sold London, Sotheby's, 12 December 1984, lot 22 (as Circle of Girolamo Romanino).

This moving depiction of Christ, his hands tied around the pillar behind him, has been only recently rediscovered as a work by the sixteenth century Venetian painter Lorenzo Lotto and represents an important addition to the most prolific period of the artist's career. Lotto, who rarely spent much time in any one place and moved around the Veneto from town to town on a near-annual basis, is nevertheless one of the best-documented painters of the first half of the sixteenth century, thanks largely to the survival of some forty letters dating from 1524 to 1539, a personal account book covering the years 1538 to 1554, and seventy-five extant signed paintings. Obscured by years of dirt and now discoloured retouchings, this painting has until now lain undetected and unpublished and seems to have spent the majority of its life in the collection of the Counts von der Schulenburg. It may be compared with numerous works by Lotto from the period, but in particular with several portraits which are characterised by the same deep set eyes and angular features; see, for example, the Portrait of a Young Man in the Galleria dell'Accademia, Venice, from circa 1530, whose gaunt expression and bony features recall those here, or likewise another Portrait of a Man of circa 1526 in the Museo d'Arte Antica del Castello Sforzesco, Milan, whose tilted head and direct gaze are, as here, so typical of the artist at this time.υ1

We are grateful to Dr. Keith Christiansen for endorsing the attribution to Lorenzo Lotto following firsthand inspection of the panel and for suggesting a date of execution in the mid 1540s.

For 250 years or more this painting was in the collection of the Counts von Schulenburg. It was acquired, along with the vast majority of the collection, by Field Marshal, Count Johann Matthias von der Schulenburg, probably in 1724 as one of eighty-eight paintings bought directly from the Dukes of Mantua. In the sale list of these eighty-eight paintings it is probably identifiable with the following entry:

1 XPO coronato di spine in tavola di Tiziano This description bears no resemblance to any entry in subsequent Schulenburg records of the 1720s and 1730s so that it seems very likely that it refers to the present work. In 1736 it is listed amongst the first group of pictures sent by Schulenburg from Venice to Berlin:

1. Pordenon Quadro rapυta Christo alla colonna. Costo: 20. Stima de Professori: 150 Subsequently it is part of a French list of Schulenburg's pictures compiled circa 1750, after his death:

39 Titian ou Pordinon. 1. Tableau en planche, représ. Jesus Christ à la colonne en demi figure This latter corresponds with the inscription and old inventory number 39 on the verso of this panel, and formerly on the recto, lower left (removed sometime after 1984 (see Provenance). The inscription on the reverse reads:

Ticiano.P./ Unveräusserliches Eigentum des Gräflich Schulenburgscha.../ Hauses Hehlen in Hehlen oD W./ No. 39. The painting thus seems to have been acquired with an attribution to Titian, spent a few decades as by Pordenone, before reverting back to Titian. The painting finally left the Schulenburg collection in 1984 when sold at Sotheby's London (see Provenance). It is therefore only recently that it has been identified as by Lorenzo Lotto. Such discrepancies are common in the Schulenburg lists; Lotto's Portrait of Fra Gregorio Belo, for example, is recorded in the inventories as by Paolo Veronese, but now hangs in the Metropolitan Museum of Art in New York correctly attributed to Lotto.

Johann Matthias settled in Venice in 1718. He had served the Serenissima as Fieldmarshal in their campaigns against the Ottoman Empire and, having driven their armies away from the island of Corfu, he was declared the saviour of the Republic, was commemorated by a statue, and was awarded a pension of 5,000 ducats a year. From 1724 he put together one of the great collections of his time and he was also perhaps the most prolific patron of Venetian painters of the 18υth century, employing artists such as Piazzetta (who also compiled his 1739 inventory of pictures at the Palazzo Loredan, his residence in Venice), both Francesco and Gian Antonio Guardi, Canaletto and many others. His ultimate aim was to amass the largest and greatest collection of pictures in Germany, at the palace in Berlin built by his nephew Adolph Friedrich, and he thus sent many shipments north from Venice in the years 1736-40, the first of which included the present work.
1. For good reproductions of both of these works see C. Pirovano, Lotto, Milan 2002, pp. 123, 184, no. 186, reproduced p. 123 & pp. 116-17, 183, no. 92, reproduced p. 116 , respectively.