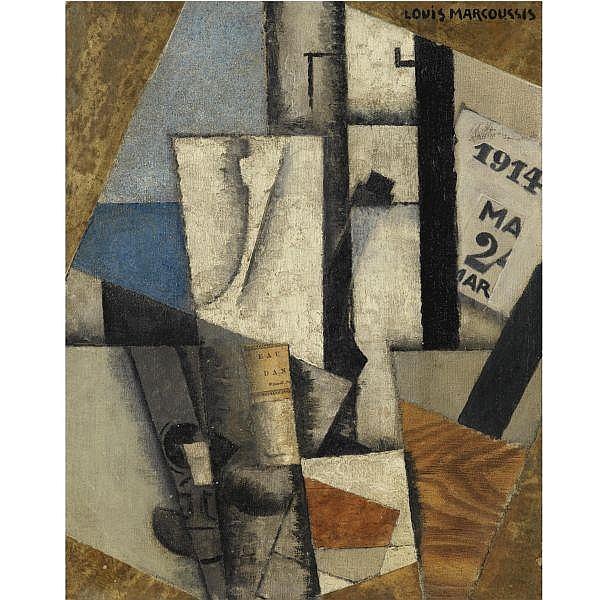 Ruth Tillard Arp, Paris
Acquired from the above by the present owner

To be included in the forthcoming Marcoussis Catalogue raisonné being prepared by Solange Millet.
PROPERTY FROM A PRIVATE COLLECTION, FRANCE
A Polish émigré in Paris, Louis Marcoussis had long moved in Cubist circles. His close friends included Juan Gris, Guillaume Apollinaire and - until he eloped in 1910 with Marcelle Humbert, Marcoussis' mistress - Pablo Picasso. That episode would provide the catalyst for his painting; relocated to Montparnasse from the hills of Montmartre, he naturalised his name and embarked upon a unique interrogation of Cubist theory. Initially respecting the grammar and vocabulary of Analytical Cubism, he developed a distinct manner that drew equally on the accretive tendencies and technical experimentation associated with the Synthetic period. Executed in 1914, Nature morte à l'éphéméride is one of two papiers-collés considered by Jean Lafranchis to be 'among the most important works produced by Marcoussis before the First World War' (J. Lafranchis, op. cit., p. 69; see fig. 1). The café or bistro, centre of Parisian social life, has been deconstructed, objective reality replaced by one conceived by the artist. Among the shifting planes of the composition one glimpses the silhouette of an object depicted from multiple perspectives, or merely suggested by a partial contour. Ephemera from the café scene - a label, a piece of faux bois - are pasted onto the picture surface, confronted by trompe l'oeil letters and numbers. Each element serves a mnemonic function; each is a memento from a place and time experienced. Marcoussis had not long begun his experimentation with the papiers collés technique when World War I broke out: 'the declaration of War interrupted these adventurous researches, displacing him for more than four years from the Front Line of Cubism to another front' (J. Lafranchis, op. cit., p. 74). Nonetheless, in the words of Jean Lafranchis, 'the two recorded papiers-collés are Marcoussis' purest legacy to the so-called 'Heroic' period of Cubism.' FIG. 1. Louis Marcoussis, La bouteille de whisky et le paquet de Scaferlati, 1913, oil on paper laid down on canvas, sold: Sotheby's, New York, 6th November 2003, for $512,000