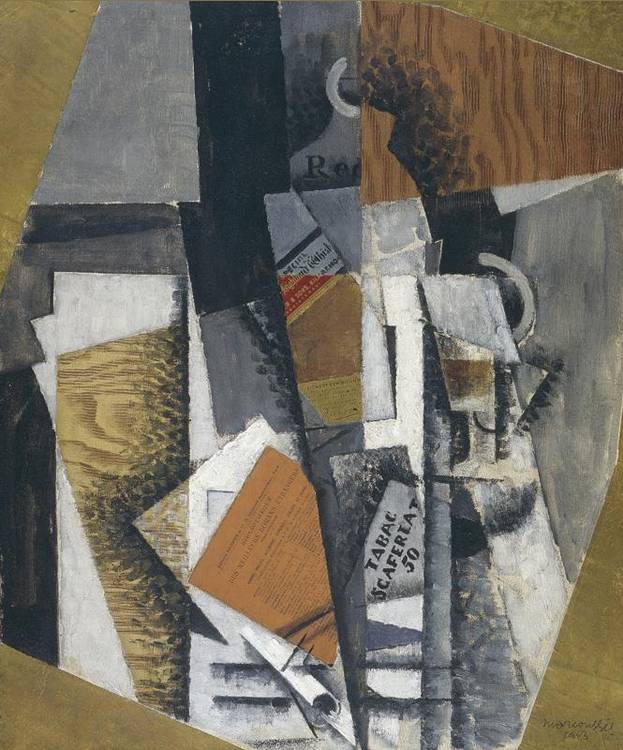 Oil and papier collé on canvas

A Polish émigré in Paris, the artist had long moved in Cubist circles. His close friends included Juan Gris, Guillaume Apollinaire and - until he eloped in 1910 with Marcelle Humbert, Marcoussis' mistress - Pablo Picasso. That episode would provide the catalyst for his painting: relocated to Montparnasse from the hills of Montmartre, he naturalized his name and embarked upon a unique interrogation of Cubist theory.

In his works from this period, like those of his peers, "seen-reality was displaced by conceived-reality." (ibid.) The café or bistro, center of Parisian social life, was an obvious candidate for deconstruction, in order to be recreated conceptually. Here Marcoussis was "naturally surrounded by the accessoires of the new Cubist school, as exacting in its choices as David and his neo-classicists: playing cards, dominos, lighters, pipes, packets of tobacco, boxes of matches... "(ibid, p. 58) Initially respecting the grammar and vocabulary of 'analytical' Cubism, he evolved a unique manner that drew equally on the accretive tendencies and technical experimentation associated with the 'synthetic' period.

Just before the War, Marcoussis began attempting the papiers collés technique recently pioneered by Picasso and Braque: "having assembled a number of objects, such as tobacco packets, printed flyers, wallpaper and faux-bois, he immersed himself into the unknown depths of Cubism. The declaration of War interrupted these adventurous researches, displacing him for more than four years from the Front Line of Cubism to another front." (ibid., p. 74) Stunning in its diverse manipulation of paint and grattage, and confronting real paper labels with trompe l'oeil, La bouteille de whisky et le paquet de Scaferlati attests the strength and originality of one of the most interesting Cubists. In the words of Jean Lafranchis, "the two recorded papiers-collés are Marcoussis' purest legacy to the so-called 'Heroic' period of Cubism." (ibid., p. 74)