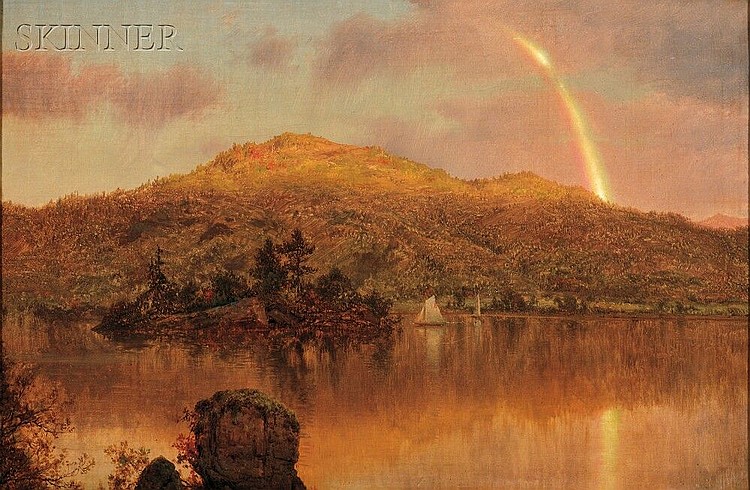 N.B. Hudson River School painter Louis Rémy Mignot was born in Charleston, South Carolina. He began his art studies in the Netherlands, where he met fellow student Eastman Johnson in 1851. By 1855 Mignot had returned to the United States became active in the art world, exhibiting at the National Academy of Design and the Pennsylvania Academy of Fine Art. In 1858 he accompanied Frederick Church to South America, a trip that would be pivotal for his career. Later that year, he moved into the Tenth Street Studio alongside Church, Sanford Gifford, and other Hudson River School painters, and he was elected to the Century Association and to Associate membership in the National Academy of Design. Mignot also joined the "Artists Excursion" sponsored by the B & O Railroad to paint areas newly opened via the railroad.

Mignot's early landscape paintings were criticized for showing too much European influence. He then refined his technique to be more in keeping with his Hudson River School colleagues, working towards a purely American style. (1) The work at hand shows the quiet repose typical of Mignot's mature style. There is a somber quality of the autumn landscape that may reflect the opening hostilities of the Civil War and the artist's subsequent departure for Europe, where he would remain for the rest of his life. (2)

We would like to thank John W. Coffey for his help with this attribution and cataloguing of this lot.

Original canvas trimmed of tacking edges and lined. Original canvas beginning to lift from secondary support at l.l. edge in an area measuring 3 inches high and about 3/4 inch wide at the maximum. Small dot of retouch (1/4 in. dia.) to sky at u.r., located 3 inches down from the top and 3/4 in. in from the right side. Under UV examination varnish inconsistencies are apparent over the foreground rocks and in the water at the lower right. Stable craquelure overall.


The absence of a condition statement does not imply that the lot is in perfect condition or completely free from wear and tear, imperfections or the effects of aging. Condition requests can be obtained via email (lot inquiry button) or by telephone to the appropriate gallery location (Boston/617.350.5400 or Marlborough/508.970.3000). Any condition statement given, as a courtesy to a client, is only an opinion and should not be treated as a statement of fact. Skinner Inc. shall have no responsibility for any error or omission.