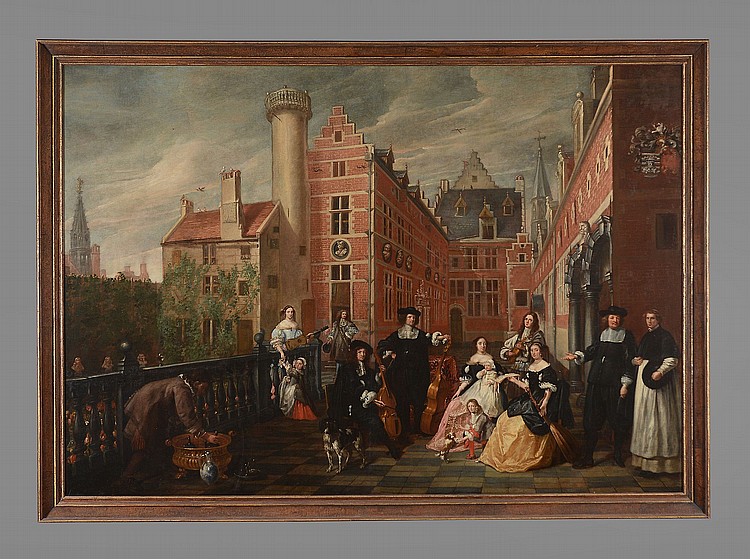 Louis Volders (fl. 1666-1711) - The Lefèvre family at a private concert on the tiled terrace of a palatial building, Brussels

Lot 202: Louis Volders (fl. 1666-1711) - The Lefèvre family at a private concert on the tiled terrace of a palatial building, Brussels

Oil on canvas Signed and dated 1666 on the cello, centre right 170 x 225 cm. (67 1/8 x 88 1/2 in) Provenance: Probably commissioned by Lancelot Lefèvre, and thence by descent to M. A. Lefèvre; Sale. Lefèvre Collection, Paris, 17th-20th April, 1882, lot 95; Sale. Christie's, Bischoffseim Sale, 7th May, 1926, lot 107 (bt. by Willis for 400 gns); Sale. Sotheby's Parke Bernet, London, 16th April 1980, lot 75. Thomas Agnews, London, 17th June 1980; Bought from the above by the present owner, 1984 Exhibited: Thomas Agnews, London, June to July 1979, no. 28 Engraved: Etching by Edmund Joseph Ramus (1822-1890), La partie de musique, published in 'L'Art', circa 1880-1883 The family group presented on this unidentified Brussels' terrace, has been identified as the tapestry weaving dynasty of the Lefèvre family, with the family coat of arms visible on the right and identifiable in J.B. Riestap's Armorial Général (see vol. I, p. 654). The composition includes a man with a violone, another with a viol da gamba, a lady with a theorbo lute, and behind her, a man with a violin. The origins of the Lefèvre family appear to possibly begin with Pierre le Fevre, who in 1630 was recorded in Italy and identified as a master tapestry worker, and a native of Paris. In 1647, Pierre was made an offer on the part of Henry IV of France, following which he subsequently left Florence for Paris. While in Paris, Pierre was styled Tapissier to the King, and provided with a workshop in the Garden of Tuileries. A second workshop was known to have been erected in the Garden of Tuileries, and was managed by his son Jean Lefèvre, who appears to have been in charge until 1770.[1] It is probable that it was Jean Lefèvre who commissioned the present work from Volders, and which was then passed through the family until the Lefèvre family auction in Paris in 1882. Louis Volders is a relatively obscure artist with very little known about his artistic output. He is known to have a brother, also a painter, called Lancelot Volders (fl. 1653-1675), who painted a very similar musical group portrait, albeit somewhat smaller, that was previously in the Collection de Sellier de Moranville, Belgium.[2] In the Museo Lazaro Galdiano, Madrid, there is a painting attributed to Louis Volders, which also features a large family group with instruments on a palatial terrace, probably in Brussels, which suggests that the compositional structure of the present painting wasn't executed in isolation.[3] Yet, while there are other known variants of the musical family portrait, the size and scale of the Lefèvre family group would appear to be the grandest known expression. [1] cf. Williamson, George Charles, úmily of Lefèvre', Catholic Encyclopedia, Vol. IX, 1913 [2] See: Galerie Jan de Maere, Brussels, Autumn exhb. cat., 1990 [3] See: Camon Aznar, José, Guía delMuseo Lázaro Galdiano. Madrid: Fundación Lázaro Galdiano, 1951. p. 104

Before being able to collect your purchases you are required to pay the hammer price, plus the applicable commissions, and obtain a receipt acknowledging payment. Collection of the purchased lots is at the purchaser's risk and expense and whilst Dreweatts do not provide packing and despatch service we can suggest some carriers. Dreweatts also require that all purchased items are collected within three days of the sale to avoid a storage charge being applied.

The Contents of Finchcocks Musical Museum

VAT. (*) indicates that VAT is payable by the purchaser at the standard rate (presently 20%) on the hammer price as well as being an element in the buyer's premium. This imposition of VAT is likely to be because the seller is registered for VAT within the European Union and is not operating the Dealers Margin Scheme or because VAT is due at 20% on importation into the UK. The double symbol (**) indicates that the lot has been imported from outside the European Union and the present position is that these lots are liable to a reduced rate of VAT (5%) on the gross lot price (i.e. both the hammer price and the buyer's premium). Lots which appear without either of the above symbols indicate that no VAT is payable on the hammer price. This is because such lots are sold using the Auctioneers' Margin Scheme and it should be noted that the VAT included within the Premium is not recoverable as input tax.

Methods of Payment. Any cheques tendered will need to be cleared before removal of the goods is permitted. The following methods of payment are acceptable:
Sterling cheque to be drawn on a UK bank and made payable to 'Bloomsbury Auctions'. It will be necessary to allow at least five working days for the cheque to clear before collecting your purchases.
Bank transfer. All transfers must state the relevant sale number, lot number and your bid / paddle number. If transferring from a foreign currency, the amount we receive must be the total due in pounds sterling (after currency conversion and the deduction of any bank charges). Our bank details can be found on the reverse of your invoice or in the sale catalogue under 'Important Notices'.
Debit cards drawn on a UK bank and registered to a UK billing address. There is no additional charge for purchases made with these cards. Debit cards drawn on an overseas bank or deferred debit cards will be subject to a 3% surcharge.
Sterling cash payments of up to £8,000 and debit cards payments can be made at the Cashier's Office, either during or after the sale.

Before being able to collect your purchases you are required to pay the hammer price, plus the applicable commissions, and obtain a receipt acknowledging payment. Collection of the purchased lots is at the purchaser's risk and expense and whilst Dreweatts do not provide packing and despatch service we can suggest some carriers. Dreweatts also require that all purchased items are collected within three days of the sale to avoid a storage charge being applied.