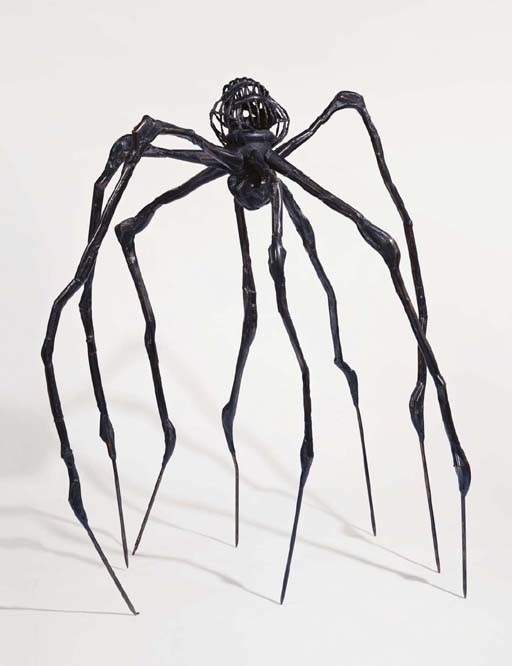 Cheim & Read, New York
Acquired from the above by the present owner

"The Spider is an ode to my mother.
She was a tapestry woman.
My mother was my best friend.
She was deliberate, clever, patient, soothing, reasonable, dainty,
subtle, indispensable, neat, and useful as a Spider."
--Louise Bourgeois, 1996

Born in Paris in 1911, Louise Bourgeois has lived and worked in New York since 1938. The motif of the spider, which has dominated Bourgeois' production since the mid-1990s is one of the most charged and iconic in the artist's diverse oeuvre. Although the spider has largely become a symbol of Bourgeois's late work, we can find drawings in which the artist took the spider as subject from as early as 1947.
With its tall legs supporting a cage-like enclosure, this architectonic Spider reigns over a web of paradox and intrigue. It is both protector and predator; one recoils at first sight and then inches closer. Its exaggerated legs recall the arches of so many Gothic cathedrals, and its form becomes an airy mass. Spider creates a space of both asylum and inquisition.
Bourgeois' father ran a tapestry restoration company in Paris, and this business is an obvious reference for Spider. Indeed, how could the daughter of someone who fixed other people's messy webs not get tangled up in arachnid metaphors? Yet, Bourgeois' father was also stuck in webs of infidelity and deception from which he couldn't untangle himself. And, for Bourgeois, the Spider is primarily associated with her mother (who also worked in tapestry restoration), who died when Louise was in her twenties. Spider stands as a solid testament to the Maternal: protector and provider.
Spider is also a personification of the artist herself. As the art historian Robert Storr claims (with Freudian overtones): "She produces by secreting. Ceaselessly, she spins the space of her life and her work, incessantly inventing and redefining it. Her own extended body determines the space of her web. It incorporates the wiles of the hunter; it is host to elementary needs-for the spider, mystery and secretion are intimately allied." (Robert Storr in Louise Bourgeois: Emotions Abstracted, Werke/Works 1941-2000, exh. cat. Zurich, 2004, n.p.) If Spider is at once a powerful metaphor for Bourgeois' duplicitous father, protective mother and herself as secreting artist, it is also a general testament to the wiles of human behavior. Although not depicted, the metaphor of the web is implied. It is too big. And though we may not realize it or see it, we are all trapped in it, stuck to it, nourished by it, about to be consumed. A web is a universal metaphor for life, a silken thread spun out from one's own body and connected from a central core to form a network that is both large and fragile, permeable and transparent.