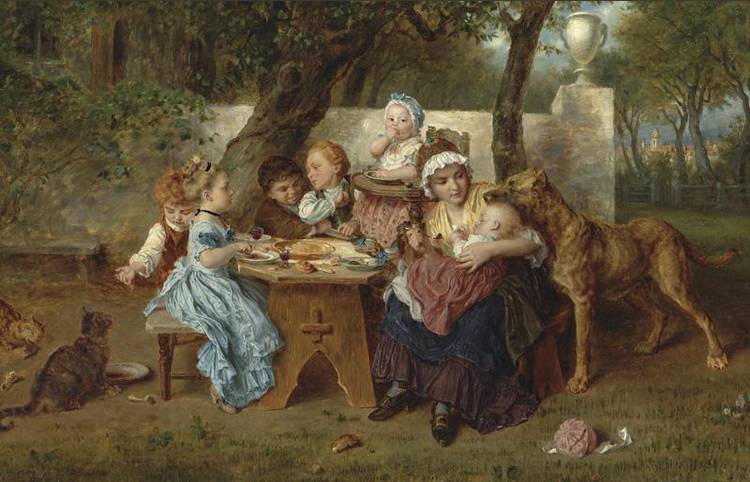 Born in Wiesbaden, where he received his early training, Knaus moved to Düsseldorf to study at the Kunstakademie in 1845 with Carl Ferdinand Sohn. In Düsseldorf, he collaborated with some of the leading exponents of genre painting during that period, such as Johann Peter Hansenclever, Jacob Becker, Julius Hubner and Rudolf Jordan.

Knaus became Germany's leading genre painter in the mid-19th Century, winning first-class medals at the Paris Salon in 1855, 1857 and 1859. Particularly praised for his ability to depict rural vignettes, Knaus became most known for his images of childhood. Responding to a societal fervor around images of children, Knaus painted scenes of young Germans having parties, attending festivals and sitting at the family table. Paintings similar to The Birthday Party won special honors at many international exhibitions where critics lauded his portrayal of "the quintessential theme" of children playing (see Ulrich Schmidt, Ludwig Knaus 1829-1910, 1980, p. 161). Edward Strahan wrote of A Children's Party, a work very similar to this one with a revision of the same figural group, "Here the ever fresh and charming humors of child-character are spread before us by the hand of one who is a master in the construction of innocent vaudevilles. Wit without a tinge of license, satire that is never dull, yet never unpleasantly knowing, snaps and sparkles through the whole scene" (E. Strahan, ed., The Art Treasures of America, Philadelphia, 1879-82, vol. I, pp. 32-33).

While other German genre painters also focused on children, Knaus carved his own stylistic niche based on his attraction to the French 18th century Rococo period. Eighteenth century furniture and wall decorations enjoyed a revival in the homes of mid-19th century, aristocratic Germany. In addition to studying the works of Boucher, Fragonard and Watteau, Knaus began his career painting parlor walls for the elite with reproductions of the Frenchmens' famous compositions. Knaus translates this experience into his genre paintings, as seen in The Birthday Party, where a girl sits in an elegant blue dress, reminiscent of Fragonard, her Rococo costume details completed with the black ribbon necklace and shoes.

The six figure group, plus one dog, of The Birthday Party was one of Knaus' most popular compositions. He first conceived of the group for another work entitled A Children's Party (Ein Kinderfest) where the figural set is the focus of the foreground in similar costume and position. The figures create a pyramid illustrating three stages of child development: the maid who feeds an infant at the right corner, the child who has just learned to feed herself at the apex, and the older girl who properly uses her fork at the left. Knaus executes each figure with technical precision and fascinating detail, creating an enchanting world of activity.