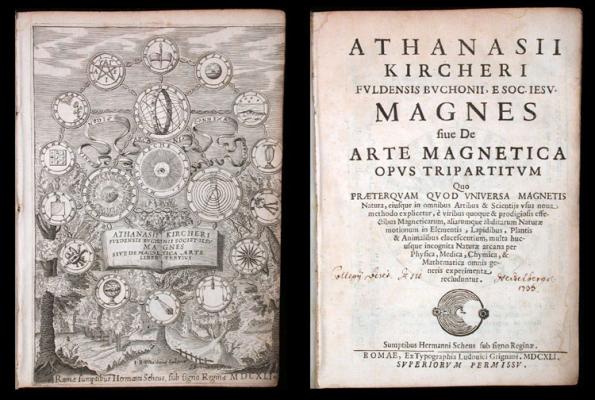 Kircher's second and largest work on the magnet. "'Its full title [speaks] of the prodigious effects of magnetic and other hidden motions of nature and to profess to disclose many hitherto unknown arcane of nature by physical, medical, chemical and mathematical experiments of every sort. The preface to the reader further represents the magnet as a priceless treasure which unlocks "all the sacraments of recondite nature," and Proteus-like assumes the form of every science' (Thorndike VII, p.269). The work is divided into three parts: the first on the magnet itself; the second on its application (encompassing magnetic statics, magnetic geometry, magnetic astronomy and magnetic natural magic); and the third on such topics as the magnetism of the earth and other heavenly bodies, the use of the thermometer, natural and artificial weather, magnetism of medicines, poisons and antidotes, the attractive force of the imagination, and the magnetism of music and love" (Norman). Kircher encompasses Gilbert's theories of magnetism and Kepler's work in astronomy, but has his own additions, both profound and curious, particularly those relating to love, spirituality, and the role of magnetism in medicine (there is an entire chapter on magnetism relating to Tarantism, the dancing mania that provides the etymology for the tarantella). This work also contains the first use of the term electro-magnetism (p.640). This copy from the Haskell F. Norman Library (bookplate) and with manuscript inscription on title-page of the Jesuit College, Heidelberg. Clendening, Athanasius Kircher, 5.4; Norman 1215; Wellcome III, p.394.

Some plates trimmed, water damage to lower half of outer margins affecting various leaves, many leaves repaired (mostly on lower outer corner) affecting the last few letters on several pages (with loss to some words on X2); modest browning.