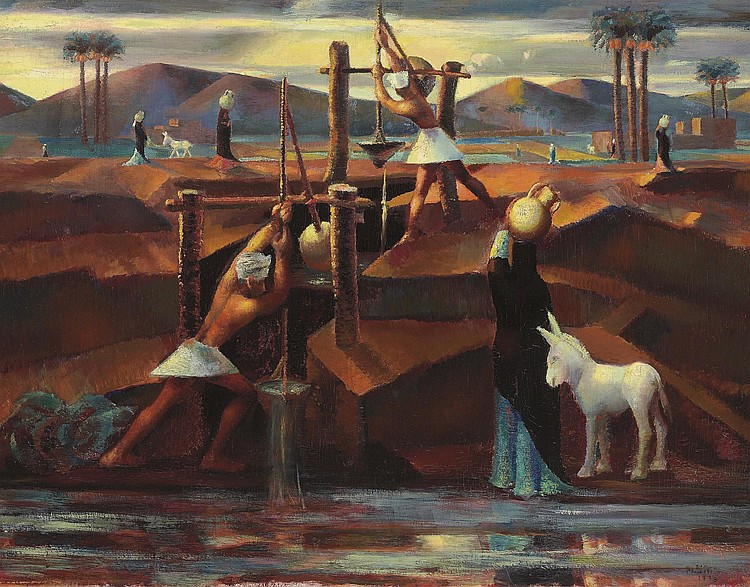 PROPERTY FROM THE COLLECTION OF DR. MOHAMMED SAID FARSI
lots are subject to 5% import Duty on the importation value (low estimate) levied at the time of collection shipment within UAE. For UAE buyers, please note that duty is paid at origin (Dubai) and not in the importing country. As such, duty paid in Dubai is treated as final duty payment. It is the buyer's responsibility to ascertain and pay all taxes due.
Les Chadoufs is one of Mahmoud Said's finest paintings, exceptional both in its carefully studied geometry and in its iconography. Its controlled and coherent design recalls principles of the Italian Renaissance, whilst its iconography evokes prototypes from key periods in Egypt's long history. In this painting, without doubt one of Said's most classically inspired compostitions, he links Egypt's antiquity to her present as a powerful metaphor for an Egyptian Renaissance.

What first strikes the viewer is the pyramidal alignment which dominates the painting. Bounded on the left by a male figure in the foreground and on the right by a water-carrying woman and a donkey, the summit is formed by a second man drawing water from a well at the top. This pyramid is super-imposed upon at least five levels of depth- a stream of water at the front; the man, woman and donkey in the foreground just beyond it; behind that the man at the top of the pyramid; the line of figures in the background; finally the hills and mountains in the distance.
This clear construction, with its use of pyramidal composition and a powerful sense of single-point perspective have symbolic associations. The pyramid, long used as a spirtual methaphor, carries additional meaning in an Egyptian context and the forceful use of single-point perspective implies clarity, rationality and progress. Both carry strong echoes of Florentine Renaissance painting, which compares to that in both the Martyrdom of Saint Sebastian, 1475, by Antonio del Pollaiuolo and Piero del Pollaiuolo, in the National Gallery in London, and in Massacio's fresco of The Holy Trinity in the church of Santa Maria Novella in Florence. The rows of palm trees in the background resembling ruined classical colonnades -themselves ultimately derived from those of an Egyptian temple- add to the Italianate flavour, which itself harks back to ancient classical prototypes.

To complement this powerful classical geometry, Said introduces a timeless and distinctly Egyptian iconography, which includes veiled statuesque women carrying water jars, men drawing water from wells and white long-eared donkeys. All the figures are seen profile. The men, dressed only in turbans and loincloths, with their exaggerated postures, minimal clothing, and frieze-like distribution of across the canvas, closely resemble the gigantic male figures carved in low relief on the outer pylons of Upper Egyptian temples.

Whilst it is the male figures that carry an unmistakeable Pharaonic air the female figures, enshrouded as they are within black veils, serve as a link between Egypt's present and her classical past. The Hellenistic city of Alexandria, founded and named for Alexander the Great, was later to become the second city of the Roman Empire at its peak. Few structures survive from that period, but in its Graeco-Roman Museum, Mahmoud Said saw statues of the goddess Tanagra, with their voluptous bodies wrapped within voluminous cloaks, the faces of which had been made to resemble Alexandrian ladies of the Hellenistic era. In the eyes of Said, their appearance was exactly like the women in the street of Alexandria of his day. These veiled figures are also a homage to the work of Mahmoud Mokhtar, much admired by Mahmoud Said. Mokhtar's statuesque veiled ladies, filling their water contatiners in adverse conditions or carrying them upon their heads, demonstrate that grace, nobility and labour need not be mutually exclusive.

The donkey is a recurrent motif in Mahmoud Said's work of the late 1920s and 1930s. A typical sight in the Nile Valley, donkeys have long been by far the most common beast of burden in this fertile region. In the visual arts depictions of donkeys have a long history, notably in medieval European paintings depciting the Entry of Christ into Jerusalem. Christ's mount, a humble donkey, not a magnificent horse, represents humility, innocence and steadfastness. Explicit reference to this is made in one of Said's early works, The Donkey (1927), where a monk-like figure seated atop a donkey is pictured against the backdrop of a stylized Alexandria Corniche. In the present work, the untethered donkeys retain their symbolic value, faithful companions to the human figures.