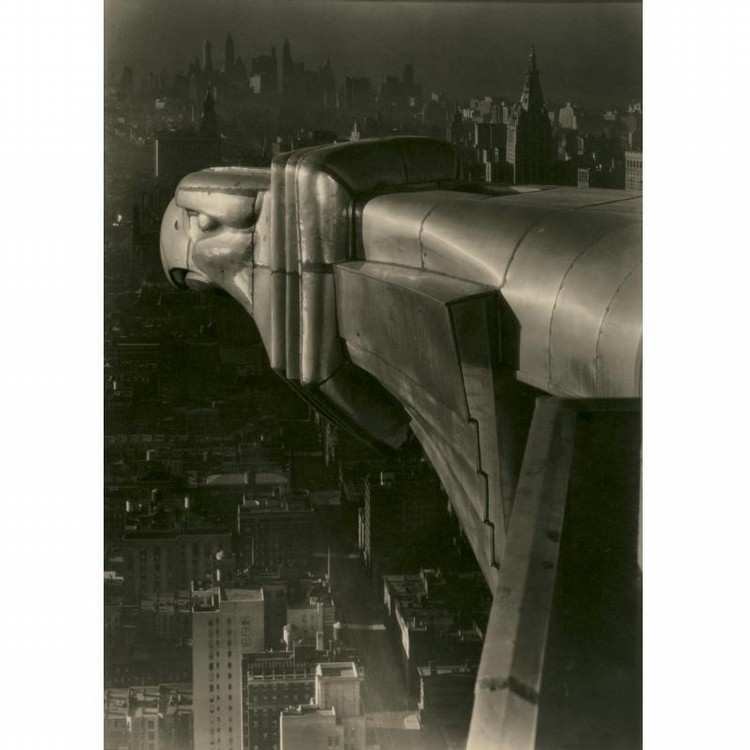 oversized, warm-toned, titled and annotated 'Mid-winter 1929-30' and 'Her Studio on 61st Floor Where Gargoyles Situated' in unidentified hands in pencil on the reverse, matted, framed, 1929-30

Collection of the photographer

The photographer to a private collector, 1970

Acquired by the Edwynn Houk Gallery, Chicago, from the above

Acquired by the Gilman Paper Company from the above, 1988

Other prints of this image:

Margaret Bourke-White was commissioned by the Chrysler Corporation to photograph their new, 77-story, 1,046-foot skyscraper in 1930, while it was still under construction. In her autobiography, Portrait of Myself, Bourke-White says of her first glimpse of the Chrysler Building gargoyles,

'On the sixty-first floor, the workmen started building some curious structures which overhung 42nd Street and Lexington Avenue below. When I learned these were to be gargoyles à la Notre Dame, but made of stainless steel as more suitable for the twentieth century, I decided that here would be my new studio. There was no place in the world that I would accept as a substitute. I was ready to close my studio in Cleveland in order to be nearer Fortune, but it was the gargoyles which gave me the final spurt to New York' (p. 78).

When the building's landlord expressed doubt about renting such prime real estate to a woman, in what was then, briefly, the tallest building in the world, Fortune magazine intervened on her behalf. Later that year, Bourke-White opened her studio, and she remained there until early 1933.

It was from this space on the southeast side of the Chrysler Building that Bourke-White photographed one of the two imposing gargoyles accessible to her. Designed by Chesley Bonestell and inspired by the 1929 Chrysler Plymouth hood ornament, they were among the many automotive-themed ornaments, including hubcaps, mudguards, winged radiator caps, and stylized cars, adorning this exuberant, luxurious building. The Chrysler Building's flamboyance was not seen again in skyscraper architecture. The Crash of 1929 and the Depression intervened, and more austere European modernist design became the norm in the following decades.

Fearless, Bourke-White often delighted in climbing out onto the gargoyles themselves, 800 feet above the street, to photograph the city. This was not the first skyscraper that the daring Bourke-White had photographed. Fascinated and exhilarated by tall structures and heights, she had previously made a variety of images of and from Cleveland's Terminal Tower, and she would go on to document other large structures and to photograph from airplanes and helicopters.

At the time of this writing, it is believed that only one other print of this image in this extraordinarily large format has been offered at auction--a print from the collection of Barry Friedman (Christie's New York, 5 October 1998, Sale 9026, Lot 6).

Important Photographs from The Metropolitan Museum of Ar