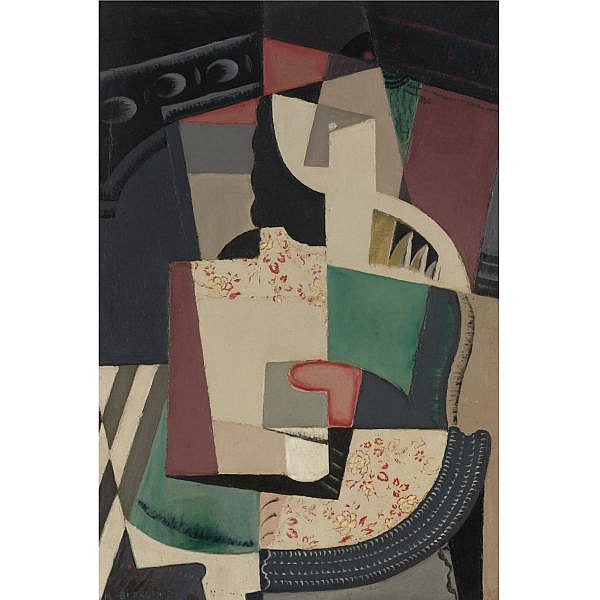 Galerie Philippe Reichenbach, Houston
Private Collection, acquired from the above in 1960
Thence by descent to the present owners

PROPERTY FROM A PRIVATE COLLECTION, MEXICO
María Blanchard first met Juan Gris in Montparnasse in 1915 and within a year quickly adopted the Cubist idiom in her pictorial lexicon. At that time Gris introduced Blanchard to the milieu of Picasso, Braque, Metzinger, and others. However, it was Léonce Rosenberg who, in 1916, recognized Blanchard's talent and secured her financial future. "He was one of the famous art dealers, such as Durand-Ruel, Vollard, Kahnweiler, etc. He either gave me monthly arrears, or bought my paintings in advance, i.e. virtually the totality of my production. Don't forget that I worked slowly. The American buyers, such as Gertrude Stein and her brother, or Germans like Wilhelm Uhde, Russians with Tchoukine, and the often omitted Zborowski, Modigliani and Soutine's dealer, or again the Swiss Herman Ruff, did not visit my studio, which my painter friends were cautious not to tell him: i.e.: Gris, Rivera, Picasso and even Lhote" (Liliane Caffin Madaule, Catalogue raisonné des oeuvres de María Blanchard, France, 2007, p. 49). However, if Rosenberg provided the financial support that Blanchard required, it was Juan Gris who proved to be her artistic and emotional devotee. Blanchard states of her relationship with Gris, "During several years, our friendship was like the symbiosis of our cubist style. I owe him a lot, but I think I gave him some form of sensibility in his rigor. "I knew [Gris] mainly since my last trip in 1915 thanks to Jacques (Lipchitz) who was a close friend of his. In 1918, we became more intimate. Gris was handsome with his very dark hair and skin, and very rare eyes with the whites having a blue hue; his stub nose, thick black eyebrows reinforced the welcoming glance of his eyes, and full reassuring lips were like an offering. He was successful with Rivera, but unlike Rivera, he know how to hide it. Our complicity fulfilled me" (op cit., p. 50). "1916: I painted mainly on canvas and I still do, but at that time Gris convinced me to paint on plywood. 'It's more solid and cheaper,' he said (letter of June 11, 1916). I have to admit to admiring his work and vocation as a cubist from which he never swerved. People used to say that he had become a cubist as one would become a monk - all of this affected me, my head spun to the great benefit of my painting!... His influence in 1917, 1918, and 1919 was a determining factor for my painting" (op. cit., p. 51). Confident in her ability to refract her subject matter with kaleidoscopic results, Femme assise is a textbook example of Synthetic Cubism. Painted during Blanchard's apex working in that genre, the present work depicts a woman seated on a rattan chair in front of carved wainscoting that envelops the sitter from four angles, whose vanishing points careen off the canvas. The thick application of paint and dizzying geometric patterns contribute to the success of the composition. Devoid of breasts or other visual cues, the figure's shoulder-length hair and repeated floral pattern in her dress are the only attributes that evidence the sitter's sex. Fig. 1 María Blanchard, Sois sage - Jeanne d'Arc, circa 1916-1917, Musée National d'Art Moderne, Centre Georges Pompidou