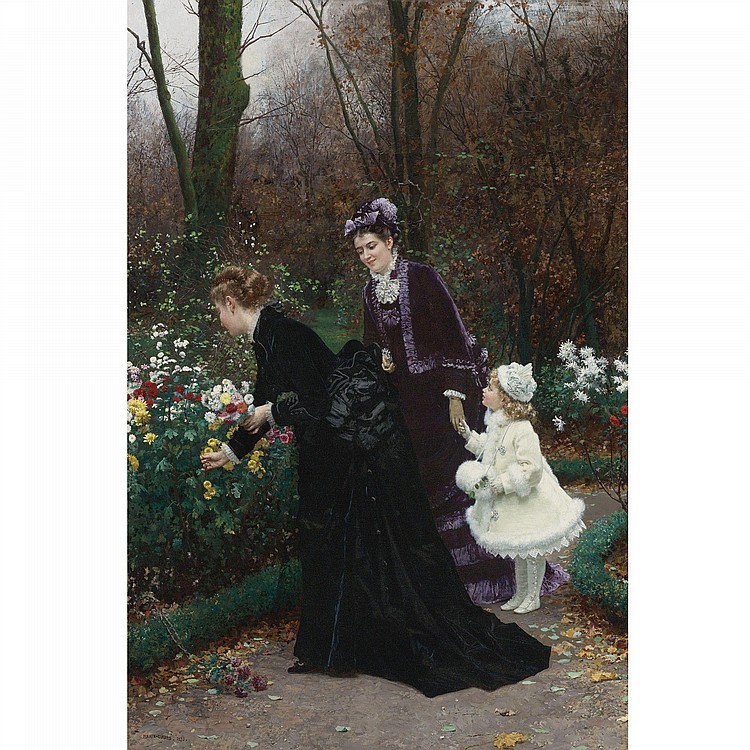 Soon after earning rave reviews in the Paris Salon of 1875, Firmin-Girard's Le jardin de la marraine was brought to the United States, most likely by Samuel P. Avery. At the time, Avery was one of the most powerful and influential art dealers. He made annual excursions from his New York home to Europe to acquire the best paintings, often commissioning them directly from the artists. Beyond commercial interests, Avery acquired his own impressive collection, and was one of the founders and trustee of New York's The Metropolitan Museum of Art. It was most probably the present work that Avery provided for The Metropolitan's Loan Collection of Paintings in the West Gallery held from May-October 1881 (with the title In the Garden and dated 1875 as noted in the exhibition guide). While the exhibition loan was altruistic (such events generated attendance and admission fees for the museum), it also served to promote Avery and his artworks in America. Indeed, the same year as Le jardin de la marraine hung at the Museum, it was also recorded in the collection of Mr. Thomas A. Howell, a wealthy sugar refiner living in Brooklyn. Published in 1881, The Masterpieces of French Art considered the present work "one of the prettiest and freshest pictures of modern times." Hung among works by Charles-Françcois Daubigny, Jules Breton and Jean-Baptiste-Camille Corot, Le jardin de la marriane was displayed in Howell's private galleries among some of the best examples of contemporary European art (in addition to a number of important American paintings, like William Merritt Chase's In the Studio, circa 1882, now at the Brooklyn Museum of Art).

Firmin-Girard's compositions had been known in wealthy American circles since at least 1876, when his Quai aux fleurs was acquired for the remarkable sum of "85,000 gold francs" by the influential dealers of Knoedler & Company, New York, on behalf of local resident "Mr. [Theron R.] Butler" (Girard, p. 8). Works like Le jardin de la marraine further established the artist's reputation for creating elaborately detailed scenes of life during the Belle Époque. In his oeuvre, Firmin-Girard seemed particularly fond of autumn landscapes, and in the present work contrasts the soft yellow-oranges of fallen leaves and the purple-brown of the landscape with the vibrant, final blooms of the garden. Capturing the chilly season invites Firmin-Girard to paint, with fine detail, the rich textures in the subjects' costumes: crushed velvet, kid-leather gloves, and fur muff. The great appeal of the composition was further evidenced in the 1889 auction of Mr. Howell's collection, where Le jardin de la marraine, known by its English translation of Godmother's Garden, added to an enormous sale total of nearly $75,000 (approximately $1.8 million today).

19th Century European Art including an Important Collection of Sculpture