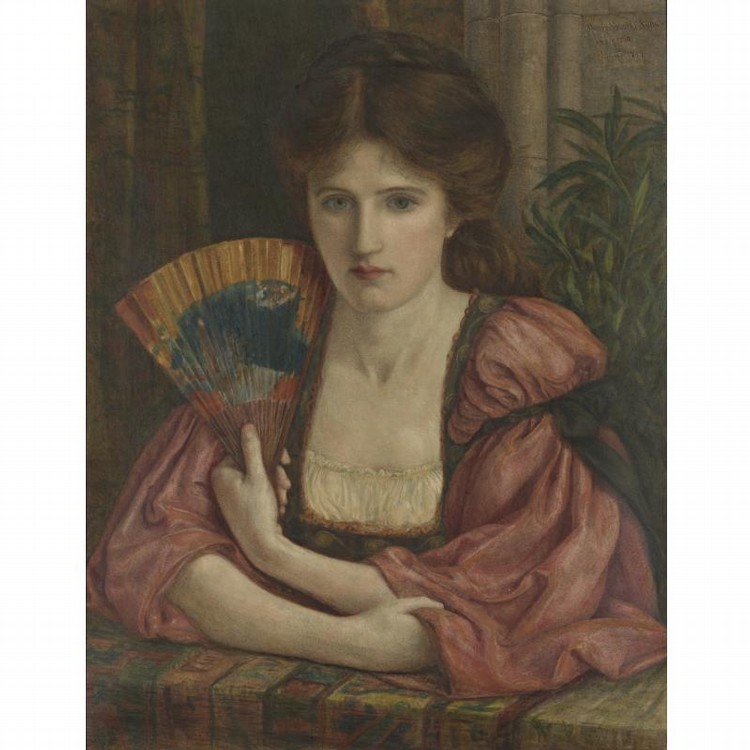 PROPERTY OF A PRIVATE COLLECTOR

gouache and pastel with gum arabic on paper

David B. Elliott, A Pre-Raphaelite Marriage: The Lives and Works of Marie Spartali Stillman and William James Stillman, London, 2006, p. 232, illustrated as the frontispiece and on pg. 91

Marie Spartali Stillman, daughter of Michael Spartali, a wealthy merchant and Greek Consul-General in London, was introduced to the Pre-Raphaelite circle through another prominent Greek family, the Ionides, known for their patronage of the arts. Immediately upon her debut at a garden party in the early 1860s, Stillman stunned the artists in attendance with her great beauty. The painter Thomas Armstrong recalled that "we were all à genoux before her", while Algernon Charles Swinburne noted she was "so beautiful that I want to sit down and cry" (as quoted in Stephen Wildman and John Christian, Edward Burne-Jones, Victorian Artist-Dreamer, New York, 1998, p. 268). In the months and years to follow, Marie posed for Edward Burne-Jones, James Abbott MacNeill Whistler, and was photographed repeatedly by Julia Margaret Cameron (Fig. 1). Yet as Dante Gabriel Rossetti explained, Marie's outstanding, unique beauty was not easy to capture, as he found her head "about the most difficult I ever drew. It depends so much on real form as on a subtle charm of life which one can recreate" (as quoted in Wildman and Christian, p. 269). With this contemporary remark on the confounding quality of her beauty, it is particularly interesting to turn to the present work of a serenely, seemingly self-possessed young woman, a self-portrait.

More than a famous model, Stillman was a recognized artist who exhibited regularly at the Grosvenor Gallery and New Gallery from 1877. While at first Stillman, like many women of her background and era, studied drawing and painting to promote her social graces, she turned to serious work as a pupil of Ford Madox Brown and was deeply influenced by Rossetti's technique. She worked mostly in watercolor, a traditional choice for women artists, yet used the medium to create a density of rich color and complicated textures that replicated and rivaled the effects of oil paint. Stillman's work often depicts women at leisure in idyllic environments or illustrates themes from medieval literature and the Italian poetry of Dante and Boccaccio. These compositions and techniques are apparent in the present work. Through a close self-observation and accurate rendering of form, Stillman creates a singular vision of herself. She places a Renaissance-like costume of heavy, rosy-red folds against her creamy skin and compliments the intricate embroidered trim of her bodice with her flowing, smoldering auburn hair and decorative Japanese fan--emblematic elements of the Aesthetic portrait. Similarly, the timeless setting of what appears to be a balcony decorated with a hanging tapestry, richly woven carpet, and plant fronds reveals an attention to design and compositional arrangement that is one of the Pre-Raphaelites' hallmarks. Yet other elements of the portrait are unique to the artist and her own self-image; the cool, marine eyes, her pursed, coral lips, and crossed arms holding her body suggest a confident woman sure of her beauty and talent. Indeed, Stillman was deeply committed to her craft and often challenged by the competing responsibilities to her husband, the American journalist William James Stillman and her family. In the years following this self-portrait, the then pregnant Stillman would lament her lack of participation at the Grosvenor Gallery: "I shall have no pictures ...this year, it is very unfortunate for I have had so few opportunities of having a picture placed at any exhibition and worked so continuously" (as quoted in Susan P. Casteras, "Burne-Jones and the Pre-Raphaelite Circle at the Palace of the Aesthetes in The Grosvenor Gallery: A Palace of Art in Victorian England, New Haven, Yale University Press, p. 87).