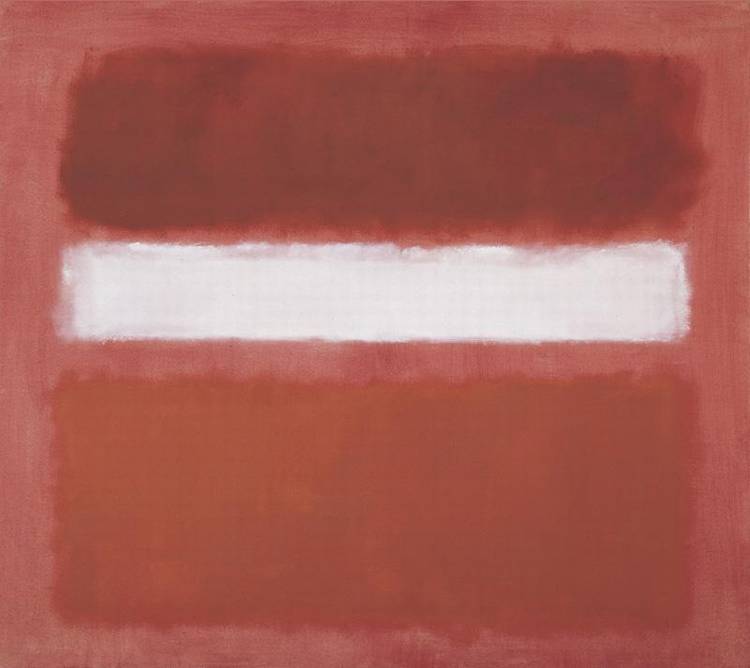 SIGNED AND DATED (MAKER'S MARKS)
signed, titled and dated 1958/8 on the reverse

"The way Rothko paints is devastating, and as with all good painting, it gets better with time. The works seem to glow... Rothko exhibits a control of the beauty of the void, the sea, the sky, and space." Ellsworth Kelly

Mark Rothko was the master of painted color as emotive experience. The 1940's saw him engage in a biomorphic abstract style close to that of his fellow Abstract Expressionist, Arshile Gorky. Gradually, however, Rothko became increasingly reductive in terms of his forms and images, and, influenced by the flat, pure color of Henri Matisse (whose work he deeply admired), and also by the thin veils of flat color evident in his friend Milton Avery's figurative work, he began to eschew readable form altogether, privileging color areas divested of any clear-cut edges. From the early 1950's, until his death in 1970, Rothko made a celebrated series of works in which any suggestion of figuration was abandoned in favor of superimposed rectangular shapes of color, with cloudy edges, that possessed an evanescence and incandescence unique to his art. Bathed in a painterly mist, these forms project their hues out of the pictorial space, inviting the viewer to contemplate the space he has created, leading him or her to extreme states of feeling.

Mark Rothko's absolute authority over color, surface, texture and composition was never more commanding than in his paintings of the 1950's. A decade in which Rothko created some of the most important, beautiful and tragic images of the Twentieth Century. Experimentation in the balance of these elements, and the proportion of weight or suspension given to each field of color, created a masterful series of sensual, enigmatic masterpieces of gripping presence. No. 8 (White Stripe) is amongst the most gripping of them all. This outstanding canvas resonates with the artist's desire to create an art that is beyond the very boundaries of painting, encompassing a transcendent, deeply affecting relationship between the viewer and the object. Rothko's challenge, to himself and his audience, is to engage not only the eye, but also the mind and even the spirit. Rothko sought to evoke Edmund Burke's notion of the 'Sublime State': one of vastness, oneness, infinity. Rothko called this a moment of clarity: "The progression of a painter's work, as it travels in time from point to point, will be toward clarity; toward the elimination of all obstacles between the painter and the idea; and the idea and the observer... To achieve this clarity is, inevitably, to be understood." (Mark Rothko, "Statement on his Attitude in Painting", The Tiger's Eye, 1949).

The reductive power of Rothko's canvases, built upon the elimination of line in favor of a blurred demarcation of color forms, achieves Burke's desired effects of unity and infinity, as the forms hover and spread out towards the canvas edges. Rothko's skill in layering his veils of varied color achieved an alchemy of optical mystery, with the evanescent vapors of color evoking a myriad of contradictory responses. Within a sense of illuminating light, the artist achieved obscurity; within apparently monolithic voids, a sense of organic presence. To come back to Edmund Burke, "... extreme light... obliterates all objects, so as in its effects exactly to resemble darkness". In the same paradoxical manner, Rothko's saturated colors transcend above and beyond the decorative, into the Metaphysical realm and the tragic Void.

The breathtaking quality of the oscillating color forms has always been the most accessible and the most seductive element of Rothko's expression. The impact of color, here layers of burgundy, rose and wine tones, electrified by a horizontal band of flashing white, is immediate. It is striking, almost physical at first glance. Interestingly, Rothko objected to any simplistic view of vibrant color. Pulsating reds and whites here throb with life and joy and yet, ironically, there is a deeper, more somber tone which one begins to feel the more time one spends in front of the picture. The chromatic contrasts he presents us with display a dissonance that is both ethereal and disquieting. Another formal contradiction lies in the monumentality of Rothko's canvases. These large format surfaces surprisingly allow for the most intimate experience between the viewer and the object. Yet, for all of that, one still feels that one is experiencing the Void, is actually 'in' the painting and that the artist has come close to the 'visual infinite'.

Oil paint seems to have been soaked into the canvas, achieving a finish akin to the effects of watercolor bleeding into paper. Rothko fleshes out his color bands with feathery, liquid brushstrokes that further define these passages as densely painted areas. Such brushwork serves to establish the amorphous, evanescent forms that appear to float on top of each other. It is as if we witness a miasma of form and color that has been extracted from some primordial soup. Rothko's rectangular shapes hover on the subtly diffused canvas, lending each shape a halo-like effect that serves to simultaneously radiate out and recede in to the picture plane. A combination of opaque and translucent layers of paint come together to continually add and subtract the density of painted 'weight' on the support, further engendering a sense of movement within the abstract composition. A beautiful equilibrium between colors is achieved and one that chimes perfectly with the shape of the canvas. The artist has calibrated these color fields in relation to the proportions of the internal forms and the overall scale of the canvas. White fizzes against the deep rose ground, pushed forward by the merlot field above and rustic red below it. Colors literally move, and their movement is articulated not by the artist brush, but by our ocular reception of the painting. We move it around because we are drawn in so deeply by its scale and by the sensitivity of its painted surface. A shimmer prevails overall, one that makes the velvety tones of the surface literally breathe. We see here a communion of color that unites each and every tone together into a unified whole - the perfect achievement of the Sublime.

The present work is an astonishing example of both Rothko's theory and praxis. The emphasis on rich color heightens our senses, yet this joyous chromatic celebration is underpinned by his ability to create a temporal and spatial vacuum which draws the viewer in, forcing them to contemplate the work and themselves in a quasi-spiritual manner. This achievement draws Rothko's work far away from the boundaries of mere decoration, and subsequently enhances the powerful concept at play here. We are not presented with an empty pattern, merely to satiate the eye, but rather with a portal into another dimension into which each individual viewer can project their own feelings and emotions.