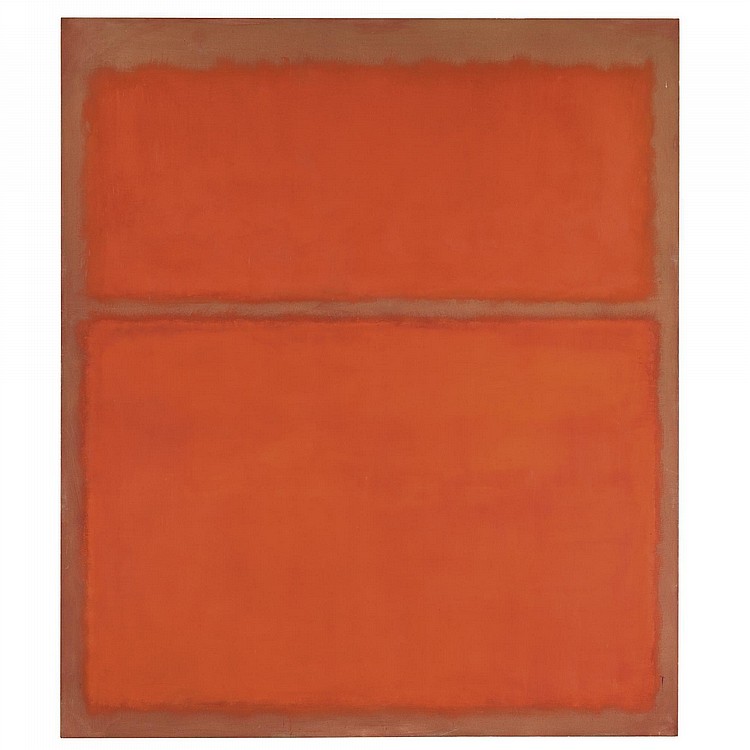 Mark Rothko's absolute authority over color, surface, texture and composition was never more commanding than in his work from the late 1950s and early 1960s. At the zenith of his career he created paintings, including the present work, Untitled from 1961, that are some of the most beautiful and tragic images of the 20th Century. Experimentation in the balance of the stacked rectangular elements, and the proportion of weight or suspension given to each cloudy field of color, created a majestic series of sensual masterpieces. Rothko embraced a profound faith in the realm of aesthetics and continuously sought his own personal vision in that realm. Over the course of his oeuvre, he developed subtle reworkings of breathtaking, oscillating color forms that are accessible and thought provoking all at once. Rothko's masterful technique allowed him to create dazzling velvety tones on the surface of his canvases that achieve harmonious equilibrium between absence and presence.

Rothko's challenge, to both himself and his audience, was to engage not only the eye, but also the mind and even the spirit. Untitled, from 1961 is a glowing canvas of fiery hues of red amorphous forms for which the artist is so championed. Here, like in his other mature paintings, Rothko opts for two rather than three bands of color and the feathery edges of the bands are softer and straighter, affecting the way these shapes occupy the space. There is a brooding element of the mystical in these works that serves as a clear precursor to the next direction the artist would take – dark, somber and dramatic canvases that would abandon warmer color in favor of maroons, grays and blacks. The present work can be interpreted as a pivotal moment in the artist's own psychological journey. In a 1959 Life magazine article, Dorothy Seiberling describes a 1959 Rothko painting and touches on his mystifying method, "Just as the hues of a sunset prompt feelings of elation mingled with sadness or unease as the dark shapes of night close in, so Rothko's colors stir mixed feelings of joy, gloom, anxiety or peace. Though the forms in the painting seem simple at first glance, they are in fact subtly complex. Edges fade in and out like memories; horizontal bands of 'cheerful' brightness have 'ominous' overtones of dark colors". (Dorothy Seiberling in "Abstract Expressionism, Part II", Life, 16 November 1959, p. 82) Untitled, 1961 reverberates both optically and intellectually, engaging us with the artist's desire to create a pictorial language that went beyond the very boundaries of painting, encompassing a transcendent, deeply affecting relationship between the viewer and the object.

Rothko's revolutionary abstract paintings are deeply seeded in an art historical understanding, as he both looked to the past for inspiration and forged ahead into an uncharted future. The prevalent complex relationship with color was shaped by the influence of Henri Matisse's pure and flat color. Matisse's painting The Red Studio from 1911 would help him explore the possibility of creating paintings from powerful color alone. Matisse's love for pattern and his deep understanding of the inherent elemental properties of color, particularly the color red, inspired Rothko. Untitled, 1961 is a compendium of vibrant varying shades of red – a color that Diane Waldman notes "fascinates Rothko above all colors as a carrier of emotion. No other color appears so insistently in his oeuvre from the time of the multiforms. It dominates Rothko's work of the late fifties and sixties and, in fact, was the color of his last painting. Red is so potent optically that it overwhelms or obliterates other hues unless it is diluted or controlled by juxtaposing it...with equally strong color." (Exh. Cat., New York, The Solomon R. Guggenheim Museum, Mark Rothko, 1903 – 1970: A Retrospective, 1978, p. 58)

Rothko also deeply admired the French painter Pierre Bonnard, and no doubt would have attended the artist's 1948 memorial show at the Museum of Modern Art in New York. Bonnard's paintings have a rich painterly affect that is in sympathy with the optical importance of Rothko's own brushstrokes that illuminate his canvases. Rothko draws on both Bonnard's rich palette and his treatment of light. Rothko's fascination with light can also be traced to the Luminists – a tradition in American painting that dominated the third quarter of the 19υth century. Luminism is centered on the authority of light – artists belonging to the movement, such as John Kensett, confront the viewer with an empty vista that is more about colored light than terrestrial soil. Light in these paintings, and in Rothko's works, is the primal source of energy. Rothko resurrects the Luminists in an abstract tradition. The blinding gold sunlight in Kensett's 1872 Sunset on the Sea is a potent metaphor for the unseen world or spirit. The present work has a similar altar-like frontality and elicits transcendental emotions. In 1958, Rothko commented, "Some artists want to tell all like at a confessional. I as a craftsman prefer to tell little ...There is more power in telling little than in telling all. Two things that painting is involved with: the uniqueness and clarity of image and how much does one have to tell." (Mark Rothko's "Address to Pratt Institute, November 1958" in Miguel López-Remiro, ed., Mark Rothko Writings on Art, 2006, p. 127) Both the Kensett and Rothko paintings bring forth a meditative reaction in the viewer, and are a successful marriage of simplicity and complexity that both draw the viewer in and push us away.

The monumentality of this canvas and its overwhelming effect on the viewer solidify Rothko as one of the greatest painters of his generation and of the 20υth century. His turn to full-fledged abstraction separated him from other American artist's of his time; however Rothko's innovations share many cross-currents with his contemporaries at critical junctures – particularly Clyfford Still and Barnett Newman. The three men possessed their own strong independent spirits and chose to remain separate from any particular movement. Newman and Rothko shared a concern for color, space, volume and light, yet Newman chose to interpret his color fields with vertical stripes ("Zips") that activated the surface and Rothko opted for the stacked bands of color and rectangles. They both empty their canvases of all but what is essential. The paintings announce their own unique materiality and create an exalted viewing experience. Rothko believed that "the progression of a painter's work, as it travels in time from point to point, will be toward clarity: toward the elimination of all obstacles between the painter and the idea, and between the idea and the observer....To achieve this clarity is, inevitably to be understood." (Mark Rothko, "Statement on His Attitude in Painting," The Tiger's Eye, no. 9, October 1949, p. 114)

In 1961, the year the present work was painted, Rothko attended John F. Kennedy's presidential inauguration in Washington D.C. and visited the Phillips Collection to view an installation of his works. His reaction was on the whole quite positive; however, he requested the chairs in the room be replaced with a bench to create a more meditative experience for the visitors. This request was symbolic of the artist's shift to an even deeper contemplative state. The color range in the 1960s paintings was far more restricted and the composition, while still monumental in size, became increasingly measured. Untitled has a refined sense of balance and an astounding blend of colors. Confronting the painting is an intimate and emotional experience, heavy with a sense of human passion, just as Rothko intended. As Rothko wrote, "I paint very large pictures. I realize that historically the function of painting large pictures is painting something very grandiose and pompous. The reason I paint them, however – I think it applies to other painters I know – is precisely because I want to be very intimate and human. To paint a small picture is to place yourself outside your experience, to look upon an experience as a stereopticon view or with a reducing glass...However you paint the larger picture, you are in it. It isn't something you command." (Mark Rothko, "A Symposium on How to Combine Architecture, Painting and Sculpture", Interiors, vol. cx, no. 10, May 1951, p. 104) Bathed in a painterly mist, the present work projects its fiery hues out of the pictorial space, inviting the viewer to contemplate the space Rothko has created and leading us to extreme states of feeling.