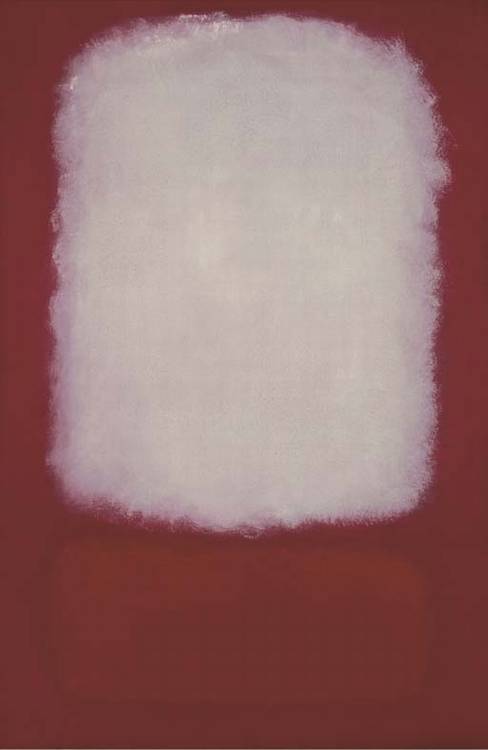 '(All great) portraits resemble each other far more than they recall the peculiarities of a particular model. In a sense (artists) have painted one character in all their work. What is indicated here is that the artist's real model is an ideal which embraces all of human drama rather than the appearance of a particular individual.' (Mark Rothko 'The Portrait and the Modern Artist' broadcast with Adolph Gottlieb, Art in New York, WNYC, October 13, 1943, published in Adolph Gottlieb: A Retrospective New York, 1981, p. 170).'

After Rothko's famous and very gradually arrived at 'breakthrough' to his mature style of painting in 1949 this deceptively simple format of painting solely a 'grid' of a few large shimmering rectangles of pure colour became the mainstay of his art for the rest of his life. The abolishing of every aspect of figuration and of the outer world of nature save those of colour and, arguably, the horizon line generated a form of pure painting that was aimed at producing a deep and direct emotional experience in the viewer. Rothko wanted his painting to attain the same poignancy, directness and intensity of experience that poetry and music have. In order to achieve this Rothko believed he had to create an art of the utmost 'clarity' and simplicity in which all 'obstacles between the painter and the idea and between the idea and the observer' were cleared away. (Mark Rothko statement in Tiger's Eye No. 9 October 1949).

Heavily influenced by Friedrich Nietzsche's The Birth of Tragedy in which Nietzsche outlined the eternal conflict that exists in art between the forces of Apollo (ordering, shaping, controlling reasoning, aspiring) and Dionysus (wild, emotive, unconscious, transcendent, ecstatic), Rothko sought to express something of the existential drama of this eternal struggle in his own work. Drawing, as Nietzsche had done, on the example of Ancient Greek tragedies such as the Orestia of Aeschylus, Rothko, in the face of the very modern tragedy of Second World War and the subsequent dawning of an ominous new atomic age, consciously sought the timeless and elemental in his art. 'I am interested only in expressing the basic human emotions - tragedy, ecstasy, doom, and so on,' Rothko declared. (Mark Rothko quoted in Selden Rodman, Conversations with Artists, New York, 1957, pp. 93-94). His paintings, with their heavy, turbulent, and resonant rectangles of colour articulating a profound longing for the sublime, for harmony, balance and resolution were, he declared, 'dramas'. The rectangles were 'the performers' in which 'neither the action nor the actors can be anticipated, or described in advance.' Each painting began, he said, 'as an unknown adventure in an unknown space. It is at the moment of completion that in a flash of recognition, they are seen to have the quantity and function which was intended. Ideas and plans that existed in the mind at the start were simply the doorway through which one left the world in which they occur.' (Mark Rothko: 'The Romantics were Prompted' published in Possibilities No. 1 Winter 1947/8).

Perhaps the last of the great Romantics of modernism, about whom his friend the critic Dore Ashton once wrote, 'what is wonderful about Mark is that he aspires, and is still capable of believing that his work can have some purpose - spiritual if you like - that is not sullied by the world,' Rothko clearly yearned for the sublime. His art speaks to directly to the individual through the collective, the void, and the mysticism of the horizon - that sacred place where two or more contrasting elements (earth, air, water,) meet in the eye and consciousness of the viewer. As Robert Rosenblum so famously pointed out, a Rothko painting is Caspar David Friedrich's Monk by the Sea but without the monk, who is essentially replaced by the viewer. 'My paintings', Rothko said, are not 'pictures of an experience, they are an experience,' both the artist's and the viewer's.

This untitled painting is a rare work painted in oil on paper in 1959, the year that Rothko completed his work on the murals for the Four Seasons restaurant in the Seagram building in Manhattan. Intentionally much smaller in scale than the extremely large canvases that dominated Rothko's work at this time, the effect he sought in these smaller paintings was somewhat different. Rothko considered these to be 'like tales' in contrast to the 'dramas' of the larger pictures. (Rothko quoted by Dore Ashton in her unpublished notes of Rothko's lecture at the Pratt Institute, October 27, 1958).

With its brilliant white cloud-like rectangle with its gentle feathered edges of paint, 'breathed' as Rothko once said, onto a rich deep raspberry red background, this painting has the startling luminosity of a moment of apparition or revelation. Balanced gently by a more shadowy and sombre-toned red rectangle at the bottom of the painting, the euphoria of the larger brighter triangle is held in check and rooted within the space of the picture in a way that both supports it and enhances the power of its radiance. It displays the full sophistication and subtlety of Rothko's brushwork, an aspect of his work that is often overlooked in the presence of such overridingly dominant and emotive use of colour, and in doing so it also exhibits the richness, depth and universality of Rothko's style. In addition, with its startling, almost transcendent use of light and colour, Untitled demonstrates how the full depth of emotion and experience of his larger paintings can also be conveyed on a different, less epic but perhaps more personal and individual scale.

VAT rate of 5% is payable on hammer price plus buyer's premium.
On occasion, Christie's has a direct financial interest in lots consigned for sale. This interest may include guaranteeing a minimum price to the consignor of property or making an advance to the consignor which is secured solely by consigned property. Such property is offered subject to a reserve. This is such a lot.