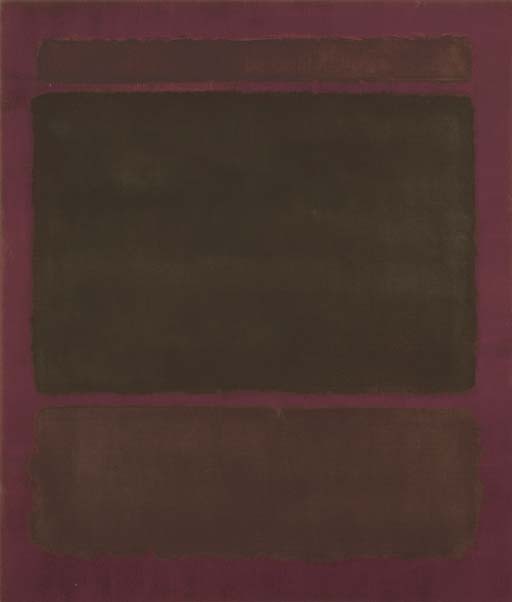 PROPERTY FROM AN IMPORTANT AMERICAN COLLECTION BEING SOLD BY THE JCF

"Since I am involved with the human element, I want to create a state of intimacy - an immediate transaction. Large pictures take you into them. Scale is of tremendous importance to me - human scale. Feelings have different weights; I prefer the weight of Mozart to Beethoven because of Mozart's wit and irony and I like his scale. Beethoven has a farmyard wit. How can a man be ponderable without being heroic? This is my problem. My pictures are involved with these human values. This is always what I think about. When I went to Europe and saw the Old Masters, I was involved with the credibility of the drama. Would Christ on the cross if he opened his eyes believe the spectators? I think that small pictures since the Renaissance are like novels; large pictures are like dramas in which one participates in a direct way. The different subject necessitates different means." (Mark Rothko answering questions at his lecture given at the Pratt Institute, New York, 1958, cited in E.B. Breslin, Mark Rothko : A Biography, Chicago 1993, p. 395.)

Painted in early 1964, Untitled is a large and classic example of Rothko's art. Consisting of three rectangles of varying color and intensity laid over a rich wine red background, the scale, proportion and hue of these simple elements combines in this work to exude an insistent and persuasive atmosphere of gravitas and deep personal longing.

Untitled was executed at a time when Rothko was at the height of his powers and shortly before he embarked on a four-year long obsession painting the murals for the Menil Chapel in Houston. The tackling of large mural projects such as those for the Seagram building or Harvard University in the late 1950s and early '60s had led to an intensification of Rothko's desire to one day create a complete environment with his painting and to his seeing his individual paintings in a new light. Rothko's earlier work with murals had developed his interest in the installation of his work and in the interaction between his pictures - how the colors and forms in one might react or interact with those of another. Indeed, by 1964, Rothko had reportedly come to consider many of his earlier single canvases as mere episodes in a more or less directionless sequence. As a result of this, in addition to seeking out grand projects such as the Menil commission, at this time he also sought to invest his single canvases with an all-encompassing sense of completeness or totality. The few paintings that Rothko made in early 1964 before embarking on preparatory work for the Menil Chapel murals, all reflect this aim, establishing through their scale and simplicity, the artist's desire to create strong individual works that stand alone as complete and singular statements.

"I think of my pictures as dramas," Rothko had stated in one of his seminal texts about his art in 1948. "The shapes in the pictures are the performers. They have been created from the need for a group of actors who are able to move dramatically without embarrassment and execute gestures without shame. Neither the action nor the actors can be anticipated, or described in advance. They begin as an unknown adventure in an unknown space. It is at the moment of completion that in a flash of recognition, they are seen to have the quantity and function which was intended. Ideas and plans that existed in the mind at the start were simply the doorway through which one left the world in which they occur." (Mark Rothko "The Romantics were Prompted" published in Possibilities, no. 1, Winter 1947/8)

For Rothko, it was the 'scale of human feeling" when set against the vast incomprehensibilty of life that he wanted to express in his work. By 1964 his work had become truly infused with an epic and tragic sense of grandeur as well. Now in his sixties, a successful and revered artist at the top of his game, the naturally pessimistic Rothko found himself to some extent isolated by his success. Fearful of being deemed irrelevant by the younger generation of 1960s artists and ever vigilant over the caprice and deception of the art market, Rothko's essentially tragic view of himself as the last Romantic grew at this time to increasingly inform the mood of his work.

In the immediate Post-War era, amidst the profound existential anxiety that had swept through both Europe and America in the aftermath of the Holocaust and the atomic bomb, Rothko had sought an elemental art founded on essential human truths and feeling. As Karl Jaspers had recalled of the time, the war years had meant that Rothko's generation had come " face to face with experiences in which we had no inclination to read Goethe, but (instead) took up Shakespeare, or the Bible, or Aeschylus." (Unsere Zukunft und Goethe Zurich, 1948, p.22.) Drawing on the epic nature of the work of his great personal heroes such as Nietzsche, Shakespeare and Mozart, as well as on that of the ancient founders of epic poetry and drama, Aeschylus or Euripides, Rothko had sought in his own work to emulate the pervasive and universal sense of humanity in the art of these great masters of the past. Now, in the mid 1960s, keen and able to work on an increasingly grand scale, it was on these same eternal human values that he sought to root his deceptively simple art.

The color and intensity of the forms in Untitled convey a profound sense of this aspect of Rothko's work simply in the way that the heavy tones of the painting resonate against both one another and the rich warm red background. The deep reds and browns, reminiscent of the colors of his Seagram murals, generate a powerful if also sober sense of the depth and richness of life. For Rothko, red and black were the primary colors of life and it was for this reason that they repeatedly play such a central role in his art. For the Menil Chapel project, Rothko chose as his theme the Passion of Christ, choosing red and black as the key colors of this project. As in this work, there too, the sense of both the vitality and the gravity of life was powerfully and mysteriously conveyed solely through the dominant and transcendent presence of color. In Untitled this same heavy presence is condensed into a strong single and classic example of his art.