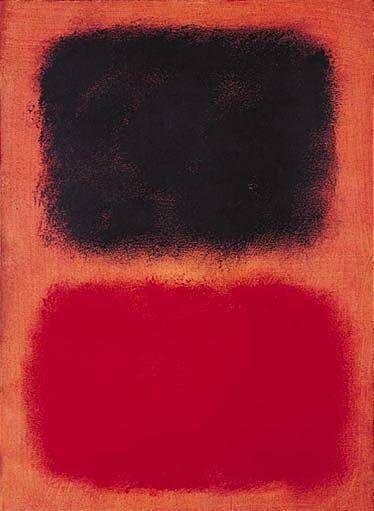 MARK ROTHKO (1903-1970)
Black and Red on Red
signed and dated 1962 on the reverse
oil on paper mounted on canvas
29Â by 21Âin. 75.3 by 54.9cm.
PROVENANCE
Marlborough-Gerson Gallery Inc., New York
Oscar Weiss, London
Waddington Galleries Ltd., London
Harold Diamond, New York
Galerie Denise RenE and Hans Mayer, Düsseldorf
Acquired by the present owner from the above in 1982
Rothko's genius is nowhere better demonstrated than in the masterful composition, Black and Red on Red. Dating from 1962, a highly productive time in Rothko's career, Black and Red on Red is executed in the vivid, emotive palette so characteristic of the artist's most iconic works. It's exquisite surface, which juxtaposes opaque and translucent paint layers, demonstrates Rothko's unique artistic ability. Color is soaked into the support, then fleshed out with feathery brushstrokes and finally defined by two densely painted areas. These amorphous forms hover atop the subtly diffused surface, creating a halo effect that seems to both radiate and recede.
For small-scale works such as these, Rothko preferred to paint on paper attached to an easel, intending to mount the sheet later to a canvas support. By conceiving of these works as paintings from the outset, Rothko blurred the distinction between painting and drawing, leading to "a general redefinition of working on paper by many artists which began in the sixties and flourished in the seventies."( p. 52)
Formally, Black and Red on Red is linked to Rothko's large-scale paintings via its crimson and black palette, often associated with Rothko's important commissions of the period, for Harvard University and Seagrams. Surely the numerous preparatory sketches Rothko made for these projects inform works like Black and Red on Red, a painting in its own right that, despite its smaller size, powerfully expresses the ambitions of these large-scaled projects.
In a 1961 interview, Rothko explained his concept of scale as it relates to the paintings on paper, "The pictures have no size - they are exactly the right size for the idea... Which comes first? They're simultaneous."(p. 36) Regardless of its format, Rothko intended for his work to function as a contemplative space, capable of moving the viewer to extreme states of feeling. In works such as Black and Red on Red, Rothko achieves his lofty goal, transporting the viewer, through the sheer force of a passionately painted composition, into a world stripped of everything except the immediate sensory experience
of beauty.Above: Photograph of Rothko's easels for his works on paper.