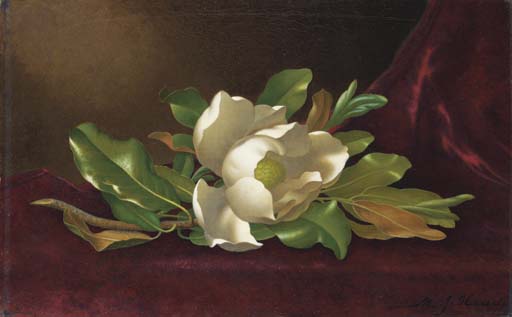 Private collection, Philadelphia, Pennsylvania, circa 1965.
By descent, until 2001.
Christie's New York, 23 May 2001, lot 4.
Acquired by the present owner from the above.

Equally adept at landscape and still-life painting, Martin Johnson Heade enjoyed one of the longest careers of any nineteenth-century American artist. He showed regularly from 1841 until his death in 1904, traveled widely and mastered a diversity of subject matter rivaled by few of his contemporaries.

With a reputation as a solitary artist, Heade lived only sporadically in the art centers of New York, Boston and Philadelphia. After 1883, in his later years, he settled in St. Augustine, Florida, where he directed his attentions chiefly to still-life paintings--including a body of work devoted to the magnolia blossom. These works are widely acknowledged as the supreme achievement of his years in Florida. At once straightforward and decorative, the paintings are beguiling and complex works. His series of magnolia paintings rank among the finest and most original of any nineteenth-century American still lifes.

Dr. Theodore E. Stebbins, Jr., notes that "among the most magnificent of Heade's works are the paintings representing the Magnolia grandiflora...These pictures, more than any others, represent the painter's new feelings of comfort and well-being, his acceptance by [Henry] Flagler and the St. Augustine establishment, and his delight in the luxuriant resort culture that he now inhabited. The magnolia blossom, with its great size--up to ten inches across--its creamy white petals, dark, glossy green leaves, and superb fragrance, was a perfect symbol of both the sensual allure of the tropics and Heade's satisfaction with his new life." (The Life and Work of Martin Johnson Heade: A Critical Analysis and Catalogue Raisonné, New Haven, Connecticut, 2000, p. 159)

Other scholars have also celebrated Heade's achievement, writing, for example, that "these works, executed in an anachronistic, highly realistic style near the end of the nineteenth century, are increasingly admired not only for their lush beauty and sensuousness but also for their mysterious, darker qualities." (J.L. Comey, Martin Johnson Heade, Boston, Massachusetts, 1999, p. 126)

Some scholarly interpretations of the magnolia series have also noted a subtle sexual undertone, comparing the blossom to a venus-like image reclining on a velvet cloth. In this picture, the cloth is draped to form part of the background and to cover the tabletop. It also provides a dark, red foil for a single, magnificent magnolia blossom. Heade further enhances the dramatic effect by enveloping the blossom in a backdrop of waxy magnolia leaves. The blossom glows with light emphasizing its sinuous outline. In its seeming simplicity, the painting is a tour-de-force of Heade's best still lifes of his Florida period.

This painting will be included in Theodore E. Stebbins, Jr.'s forthcoming third edition of his catalogue raisonné of Heade's work.