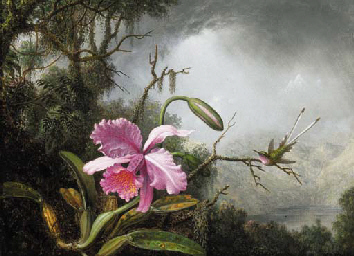 Orchid and Hummingbird, After a Storm signed 'M.J. Heade' (lower right) oil on canvas 15 x 20 in. (38.1 x 50.8 cm.) PROVENANCE William H. McKeown, Quincy, Florida. Sotheby Parke Bernet, New York, 23 May 1974, lot 31. Mr. and Mrs. George Arden, New York, by 1978. Berry-Hill Galleries, New York. Acquired by the present owner from the above. LITERATURE T.E. Stebbins, Jr., The Life and Works of Martin Johnson Heade, New Haven, Connecticut, 1975, no. 285, p. 267, illustrated T.E. Stebbins, Jr., The Life and Work of Martin Johnson Heade: A Critical Analysis and Catalogue Raisonn‚, New Haven, Connecticut, 2000, no. 495, p. 323, illustrated EXHIBITION New York, American Contemporary Art Galleries, American Flower Painting, 1850-1950, April 1978, illustrated New York, ACA Galleries, Nineteenth and Twentieth-Century Masterpieces in New York Private Collections, September-October 1978, no. 23, illustrated NOTES Celebrated landscape and still life painter Martin Johnson Heade became fascinated with the tropical flora and fauna, particularly the orchids, he encountered while he was studying and painting hummingbirds in Brazil during 1863-1865. It was not, however, until after returning to the United States from Jamaica in 1870 that Heade began to consider painting the flowers. He combined the two elements, orchids and hummingbirds, for the first time in 1871, and the resultant works have since been considered highpoints of Heade's artistic achievements. In fact, one of Heade's earliest orchid paintings belonged to Frederick Church and still hangs at Olana, Church's estate on the Hudson River. As Theodore E. Stebbins, Jr., notes, Heade's orchid paintings were as groundbreaking and revolutionary as they were beautiful. "Although the orchid was a prized plant among travelers, naturalists, and illustrators, it was little known in both the fine arts and the popular flower books. Its sexual implications were seemingly too powerful for Victorian society in England and the United States, and on the occasions it is referred to in the Flora's Lexicon and similar volumes, its meaning is simply given as, ' belle.' As the author of one such book wrote, 'In this symbollical assemblage the author has carefully avoided all indelicate allusions or double-entendre that could be offensive to modesty. The orchid was rarely painted before Heade's time, and not much after it." (T.E. Stebbins, Jr., The Life and Work of Martin Johnson Heade: A Critical Analysis and Catalogue Raisonne, New Haven, Connecticut, 2000, p. 93) The artist generally used a horizontal format for his orchid and hummingbird series, rather than the vertical composition typical of his earlier works. Stylistically, Orchid and Hummingbird, After a Storm follows the general pattern that Heade developed for the series -- he usually emphasized foreground objects, contrasting them with a hazy vista in the background, and he contrasted the soft delicateness of the orchids with the pungent, bold hues of the birds. In the present example, the pale lavender pink and rose of the fragile flower at the left and the bold hues of the feathers of the hummingbird at the right, combined with rich greens of the forest and the misty gray skies in the distance, truly create a sense of the vibrancy and fecundity of nature. Though Heade did not date this work, Stebbins assigns Orchid and Hummingbird, After a Storm to the period circa 1875 to 1890 based on his stylistic analysis. Stebbins writes: "Heade painted orchid and hummingbird compositions regularly throughout the 1870s and 1880s and more sporadically during the 1890s up to the year of his death. Most of the later pictures depict a single pink blossom of the Cattleya labiata with one or two hummingbirds, seen amid tropical mountains. These pictures are infused with warmth and sensuality; they are as much about color and atmosphere as about natural history." ( The Life and Work of Martin Johnson Heade: A Critical Analysis and Catalogue Raisonne, p. 103) In this spectacular example, the hummingbird is a male Peruvian sheartail ( Thaumastura cora ), and the orchid is a Cattleya labiata. Heade's renderings of plant and animal life reflect the public's parallel interests in science and in South America that were emerging in the United States during the second half of the nineteenth century. Scholars including Stebbins and Katherine Manthorne have considered Heade's South American paintings in light of the 1859 publication of Charles Darwin's Origin of Species, as well as the exhibition of Frederic Church's Heart of the Andes in the same year. Unlike his more scientifically oriented predecessors, Audubon and John Gould, however, Heade captures not only the nineteenth century fascination with cataloguing the natural world, but also the Victorian sense of both the teeming abundance of nature and its unpredictable power.