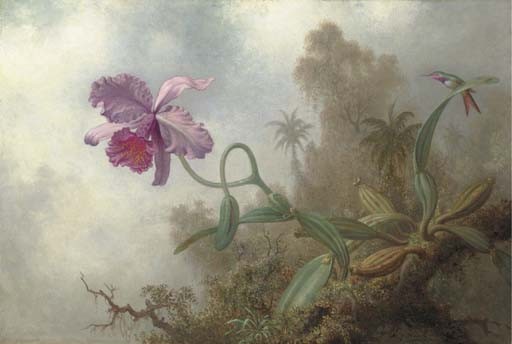 Acquired by the family of the present owner, circa 1930s.

Property from the Art Preservation Trust

Celebrated landscape and still life painter Martin Johnson Heade (Fig. 1) became fascinated with the tropical flora and fauna, particularly the orchids he encountered while he was studying and painting hummingbirds during an 1863 trip to Brazil. It was not, however, until after returning to the United States from Jamaica in 1870 that Heade began to consider painting the flowers. He combined the two elements, orchids and hummingbirds, for the first time in 1871, and the resultant works have since been considered highpoints of his artistic achievements. One of Heade's earliest orchid paintings belonged to Frederick Church and still hangs at Olana, Church's estate on the Hudson River.

The present painting is a previously un-recorded example of the artist's famed series and is a re-discovered masterwork that serves as a testament to Heade's significant and enduring contribution to American art. The painting is signed and was dated 1874, making An Orchid with an Amethyst Woodstar a notably early work in this series of subjects that captivated Heade for several following years. According to Heade expert, Theodore E. Stebbins, Jr., the present work is from a significant time in the artist's career when he was still exploring the compositional elements of his orchid and hummingbird paintings. "During these years, the painter experimented with a series of larger compositions in which the orchids are placed high on the canvas, and there is emphasis on the winding tendrils of the plant. [The present work] is also unusual in having so much sky to the left, and in the careful handling of the wooded foliage and trees to the right." (unpublished letter dated 6 March 2006)

"Heade painted orchid and hummingbird compositions regularly throughout the 1870s and 1880s and more sporadically during the 1890s up to the year of his death," writes Stebbins. "Most of the later pictures depict a single pink blossom of the Cattleya Labiata with one or two hummingbirds, seen amid tropical mountains. These pictures are infused with warmth and sensuality; they are as much about color and atmosphere as about natural history." (The Life and Work of Martin Johnson Heade: A Critical Analysis and Catalogue Raisonné, New Haven, Connecticut, 2000, p. 103) Stebbins goes on to say that Heade's orchid paintings were as groundbreaking and revolutionary as they were beautiful. "Although the orchid was a prized plant among travelers, naturalists, and illustrators, it was little known in both the fine arts and the popular flower books. Its sexual implications were seemingly too powerful for Victorian society in England and the United States, and on the occasions it is referred to in the Flora's Lexicni and similar volumes, its meaning is simply given as, 'belle.' As the author of one such book wrote, 'In this symbollical assemblage the author has carefully avoided all indelicate allusions or double-entendre that could be offensive to modesty. The orchid was rarely painted before Heade's time, and not much after it." (The Life and Work of Martin Johnson Heade: A Critical Analysis and Catalogue Raisonné, p. 93)

During the 1870s, the artist generally used a horizontal format for his orchid and hummingbird series, rather than the vertical composition typical of his earlier works. Stylistically, the present work follows the general pattern that Heade developed for the series--he usually emphasized foreground objects, contrasting them with a hazy vista in the background, and he contrasted the soft delicateness of the orchids with the saturated, bold hues of the birds. In An Orchid with an Amethyst Woodstar, the pale lavender pink and rose of the fragile flower at the left and the rich hues of the feathers of the hummingbird at the right, combined with dense greens of the forest and the misty gray skies in the distance, truly create a sense of the vibrancy and fecundity of nature. Heade has placed his two subjects harmoniously on a thoughtfully rendered branch in the midst of the jungle, set off by a luminous mist. The gentle curve of the leaves and stems are echoed in the delicately crisp outlines of the orchid and again in the tail of the hummingbird. Heade thoughtfully establishes his composition by echoing this winding pattern of line throughout the scene, first in the hummingbird far right, carrying through the curled motion of the verdant leaves in the foreground and treetops in the misty background, to the gentle folds that lead to the orchid at left.

Heade's renderings of plant and animal life (Figs. 2 and 3) reflect the public's parallel interests in science and in South America that were emerging in the United States during the second half of the nineteenth century. Scholars including Stebbins and Katherine Manthorne have considered Heade's South American paintings in light of the 1859 publication of Charles Darwin's Origin of Species, as well as the exhibition of Frederic Church's Heart of the Andes in the same year. Unlike his more scientifically oriented predecessors, Audubon and John Gould, however, Heade captures not only the nineteenth century fascination with cataloguing the natural world, but also the Victorian sense of both the teeming abundance of nature and its unpredictable power.

Heade's early attraction to the mystical hummingbird had astounding ramifications for his artistic career. "He had long been an ardent lover of nature, a sportsman, and advocate of bird sanctuaries a keen student of nature's wild life. In early childhood he had made the acquaintance of the hummingbird, of which in later life he writes: 'A few years after my first appearance in this breathing world I was attacked by the all-absorbing hummingbird craze, and it has never left me since; with the natural result that what is known about them I know, and what I don't know about them others do--or think they do. There is probably no member of the feathered tribe...that has been so thoroughly written up...and probably not one that has been honored by so much nonsense.' Somehow the beauty and lightening speed of this tiny, brilliant flower of the air so impressed him, as later to create within him the strongest urge to investigate its habits, and perpetuate on canvas its fleeting beauty, and exquisite iridescence." (R.C. McIntyre, Martin Johnson Heade, New York, 1948, pp. 10-12)

It is believed that the present work retains its original frame. Heade took great care in the overall presentation of his paintings and An Orchid with an Amethyst Woodstar demonstrates the artist's devotion to this Victorian tradition and romantic aesthetic of the nineteenth century. "Heade seems always to have cared about the framing of his paintings. Even when he was experiencing hard times during the early eighties, he was adamant in instructing Eben Loomis, a friend selling a picture for him in Washington, to have it framed by his regular framer, James S. Earle of Philadelphia. Heade urged Loomis not to show the painting 'out of the frame, on any account.' He regarded the frame as part of the painting...Only a few of Heade's pictures remain in frames that are demonstrably original to them, but from these we learn that Heade preferred frames that were larger and more complex than the ones favored by most of his contemporaries...These frames provide luxuriant windows through which the viewer sees the picture; their pale gold-leafed surfaces are highly reflective, echoing the effects of light in the paintings, while their graduated mass focuses attention on Heade's compositions and accentuates their illusion of depth." (The Life and Work of Martin Johnson Heade: A Critical Analysis and Catalogue Raisonné, p. 84) As a result, the present work offers a rare opportunity to view Heade's vision as the artist originally intended.

"John Singleton Copley wrote of 'the luxury of seeing,' and ever since Colonial times, Americans appear to have enjoyed looking at and painting objects, fruits, and flowers. Indeed, the productivity of American still-life painters surpasses that of the French painters of the genre...and far over-shadows the small contribution of contemporary English and German artists in that realm...In Heade's work, more especially as he developed the orchid and hummingbird theme, one finds an even greater passion and greater originality than in his landscapes. While his aims were perfectly consistent in both genres, elements that were at first only hinted at were here given full expression. As Roger Fry has written, 'it is in the still-life that we frequently catch the purest self-revelation of the artist.'" (T.E. Stebbins, Jr., The Life and Work of Martin Johnson Heade, New Haven, Connecticut, 1975, p. 112-13)