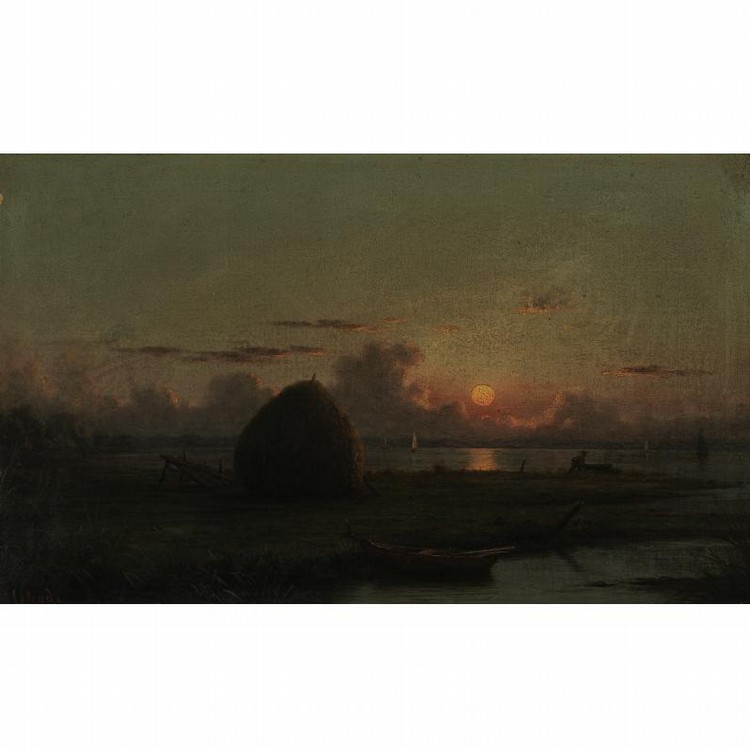 This painting will be included in the forthcoming supplement to Theodore E. Stebbins Jr.'s catalogue raisonné of the artist's work. A letter from Mr. Stebbins will accompany the lot.
PROVENANCE

Theodore E. Stebbins, Jr. describes the decade of the 1860s as the most creative in Martin Johnson Heade's long career, "with his paintings of that period displaying his own restless energy and zest as he traveled in many directions and tested a variety of subjects and styles in search of a place of his own" (The Life and Works of Martin Johnson Heade, New Haven, Connecticut, 1975, pp. 82-83). Haystack at Sunset is a transitional work, which combines elements of the artist's earlier seascapes with the marsh landscape that would become one of the primary themes of his oeuvre. With its monumental haystack and fiery setting sun, the present work presages the luminous views of coastal salt marshes Heade painted under a wide variety of light effects and atmospheric conditions in the ensuing years. According to Jules David Prown, "...Heade knew the marshes as a dramatic and enchanting part of the world, quickened by animal, bird and insect life; by moving patterns of land, grass and water; and above all by their dramatic response to light, especially at dawn and dusk. Heade's long horizontal marsh scenes present a panorama of swiftly changing atmospheric effects. Heade shared with Bierstadt and Church, more evident in the latter two's delightful small oils and sketches based on direct observation of nature than in their large canvases, a strong interest in the transitory effects of nature?the appearance of clouds, the visual effect of light filtering down upon the landscape under varying atmospheric conditions, the approach of a storm, the fleeting brilliance of the sunset. Indeed many landscape painters in the third quarter of the century had this concern, and produced some of the most beautiful American landscapes" (American Painting: From its Beginnings to the Armory Show, New York, 1987, p. 70).