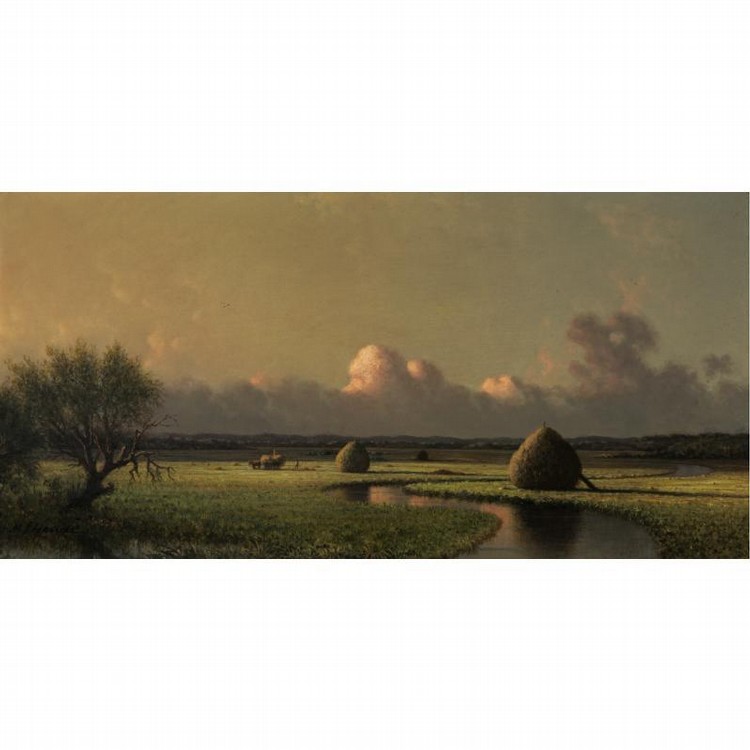 Samuel Rindge, circa 1890s
Madeleine Rindge (his daughter)
By descent to the present owner
LITERATURE AND REFERENCES

Martin Johnson Heade is renowned as an influential figure in the development of 19th century American landscape painting. A born naturalist, the artist traveled extensively throughout the United States and South America seeking artistic inspiration and compelling subject matter to fulfill his passion for flora and fauna. However, the landscape Heade found most compelling and returned to more than any other in his career was the unassuming coastal salt marsh. The artist's innovative luminist views of northeastern marshes brought him his greatest popular success and remain among his most highly regarded works.

Heade moved to New York in 1858 and took a studio in the recently completed Tenth Street Studio Building where he worked alongside a number of prominent landscape painters, among them Frederic Edwin Church. Church exerted a pivotal influence on the stylistic development of many of his contemporaries including Heade and, according to Robert Hughes, "This relationship was decisive for his work: Church showed Heade how expressive light on landscape could be. Instead of seeking out grandiose panoramas, Heade made a number of sketching trips to the coastal salt marshes of Massachusetts, New Jersey, and Rhode Island: a flat landscape of boggy ground and tidal channels, where salt hay was gathered in round stacks. Heade's paintings of this unpromising scene could be hauntingly beautiful. He chose a low horizon line to stress the pure plane of the sky, usually in a calm sunset; and under its benign light, the haystacks act as spatial markers. The result is a very minimal landscape, wide and low, in which space and interval are used with the utmost deliberation, and each element?the loaves of hay, a wedge of reflective water, the sky's dominant rectangle?acquires a perfect clarity. They are images in American art closest to those of European Romantics like Caspar David Friedrich, with the same sense of quiet awe at boundless space; light turns matter into spirit. Horizontality equals sublimity. It was characteristic of Heade that, as so often in Luminist painting, the clarity he pursued could tremble between the meditative and the ominous" (American Visions, New York, 1997, pp. 169-70).

Working in the luminist tradition, Heade painted his landscapes at dawn and at dusk, in bright sunlight and under ominous storm clouds, recording the ever changing variations of light and atmosphere prevalent along the New England coast. In Sunny Day on the Marsh Heade places special emphasis on the vast uninterrupted flatness of the marsh, drawing the viewer into the receding space with a serpentine ribbon of water that rhythmically wends its way into the distance. The subliminal calmness of Heade's landscapes is reinforced by his use of light in conjunction with a strict geometric foundation that underlies his ordering of the elements of water, land and sky. Earl A. Powell writes, "Heade, more so than [Fitz Hugh] Lane, experimented with the formal geometry of space that emphasized infinity in more exaggerated but extremely effective compositions. ...At this time Heade also began to paint the pictures of the Marshfield and Newbury marshes which were so conceptually precocious and clearly established his artistic reputation as a major contributor to the tradition of the sublime. These paintings are paradigmatic of the open composition of luminism and emphasize wide-angled perspective recession. As such, they create the sensation of sublime space more than other landscape art of the same period" (American Light: The Luminist Movement 1850-1875, Washington, D.C., National Gallery of Art, 1980, pp. 82-83).