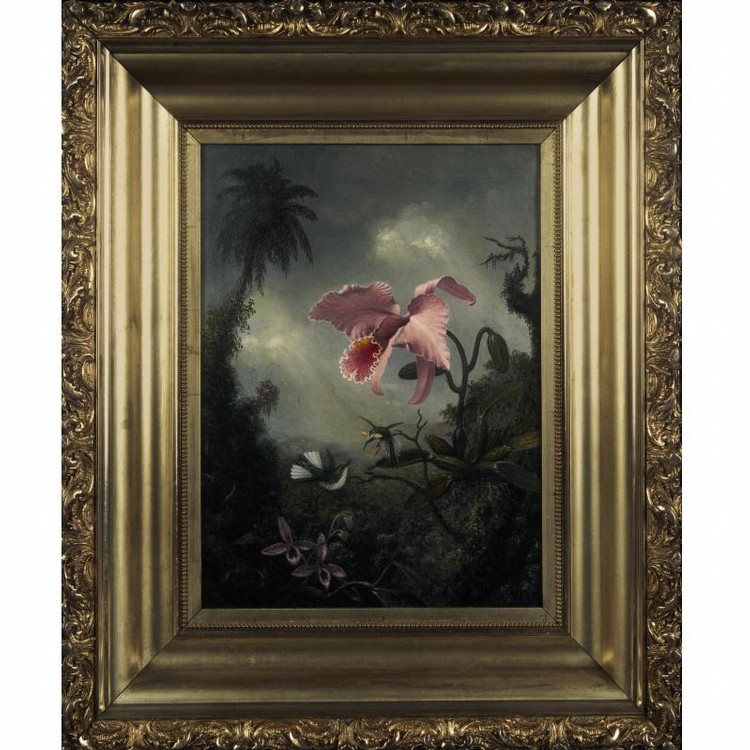 In 1863, Martin Johnson Heade traveled to Brazil where he studied and painted the indigenous species of hummingbirds with the intention of publishing a comprehensive study along the lines of John James Audubon's Birds of America (1840) and John Gould's Hummingbirds (a series of five volumes published between 1849 and 1861). Heade was determined to paint the birds from life, rather than from specimens as Gould had done, and dedicated himself to documenting the varied coloration and natural habitat of the brilliant birds. Though his Gems of Brazil was never published, Heade never lost interest in the subject and continued to paint hummingbirds throughout his career.

Writing about the present painting, Theodore E. Stebbins, Jr. observes, "The hummingbird at lower left is a black-eared fairy (Heliothryx aurita), and the upper one is a horned sungem (Heliactin cornuta). The large orchid is a Cattleya labiata, and the smaller ones at the lower left corner are Dendrobium stratiotes, native to Indonesia" (The Life and Work of Martin Johnson Heade, p. 351). The horned sungem appears in many of Heade's hummingbird and orchid paintings and was among his favorite subjects. The artist wrote of this species, "This rather rare bird was discovered by the Prince Maximillian in the interior of Brasil. Very little is known of its habits, & no well authenticated specimen of its nest has yet been found. The female of this bird is the largest, & the tail is longer & has broader feathers than that of the male. Saw but two in Brasil" (quoted in Martin Johnson Heade, Boston, Massachusetts, Museum of Fine Arts, 1999, p. 76).

Though Heade was a gifted naturalist, his juxtaposition of varieties of birds and flowers that would not have been found together in nature reveals his unswerving devotion to the romantic ideology of the nineteenth century artist. According to Karen E. Quinn "Orchids enjoyed great popularity in Europe and the United States in the nineteenth century. William Cattley's successful experiments in 1818 with the plant that was ultimately named for him, the Cattleya labiata (which became Heade's favorite), mark the beginning of orchid cultivation on a grand scale in England." Ms. Quinn continues, "The originality of Heade's orchid-and-hummingbird compositions lies not in combining birds and flowers, or even the inclusion of landscape backgrounds, for these devices were already established in ornithological illustration in the nineteenth century, as Heade would have known from his studies of the hummingbird literature. Heade's inventiveness came in combining dramatic, enlarged foreground flowers with (usually) a pair of hummingbirds before an evocative, believable tropical landscape. The result was a new kind of painting, equally still life and landscape, which possesses a great sensual and emotional power" (Martin Johnson Heade, 1999, pp. 109, 110).