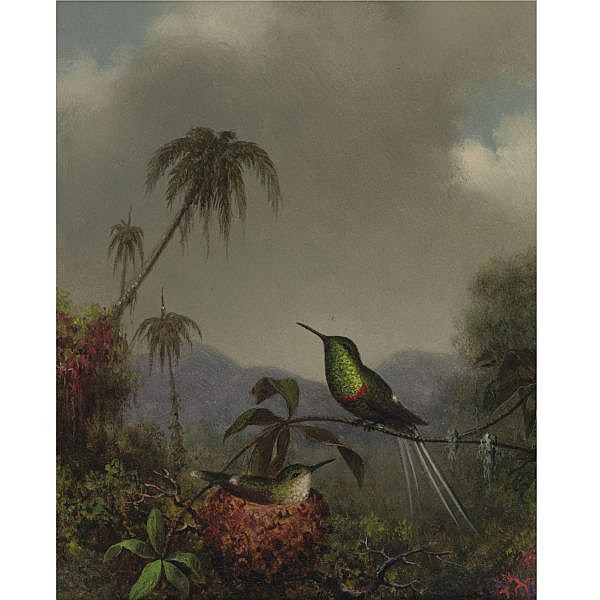 inscribed in the artist's hand Langsdorffs Thorn-Tail Brazil , and To Mr. Hall with Mr. Heade's compl on the reverse; also attached to reverse is a calling card engraved with Mr. M. J. Heade , and on its reverse is inscribed Will Mr. Hall be good enough to accept this little sketch with the compliments of the artist oil on linen mounted on board

Painted circa 1864-1865.
PROPERTY FROM THE ESTATE OF BARBARA BINGHAM MOORE
By the early nineteenth century, the Romantic movement reverberated across Europe and America, affecting the arts, religion and science. Whereas most Enlightenment philosophes viewed the universe as a passive machine, Romanticists regarded the natural world as an active, powerful guide with the capacity to instruct and inspire. A number of nineteenth century scientists believed in a fundamental connection between man and nature, claiming that observation was the key to understanding that bond. These principals generated an intense interest in surveying the natural world and codifying plant and animal life. The groundbreaking writings of naturalist Alexander von Humboldt, who traveled through South America in the late eighteenth and early nineteenth centuries, stirred the imaginations of European and American readers, fueling their desire to view the wonders of the natural world. In addition, Charles Darwin's travel memoir Voyage of the Beagle,first published in 1839, contained vivid observations of Brazil and other tropical areas that he recorded during the near five year expedition. Inspired by the example of scientists like Humboldt and Darwin, artists including Titian Ramsey Peale, George Catlin, and Frederic Church, all made their way down to South America during the nineteenth century to paint the exotic world of the tropics. Martin Johnson Heade also had a life-long interest in the natural world, and in particular, he developed a "monomaniacal" attraction to hummingbirds early in his childhood. Trying to describe their allure, he once wrote that "For one in the least degree attuned to poetic feeling, they have a singularly fascinating power which the subtlest mind is unable to explain" (quoted in The Life and Work of Martin Johnson Heade: A Critical Analysis and Catalogue Raisonné, 2000, p. 61). Inspired by the example set by other adventurous artists, as well as his own creative passions, Heade left New York for Rio de Janeiro in September of 1863. Theodore Stebbins posits several reasons for Heade's decision to visit Rio, emphasizing the threat posed to the hummingbirds. He notes that "Rio was frequently mentioned in the literature as a hummingbird center, not as a place to study the birds in nature so much as a trading post for their skins ... Hummingbird feathers were in great demand at this time in Europe and the United States, where they were sought by collectors and makers of women's hats and other apparel" (The Life and Work of Martin Johnson Heade, 2000, pp. 62-63). After arriving in Brazil, Heade penned his impressions in his journal: "There is probably no country where a person interested in ornithology, entomology, botany, mineralogy or beautiful scenery could find so much to keep him entertained" (quoted in The Life and Works of Martin Johnson Heade, 1975, p. 71). Heade intended to publish "a large and elegant album" of lithographs based upon his collection of Brazilian hummingbird paintings, which he dubbed the "Gems of Brazil." While four chromolithographs were published in London, Heade was unable to secure the two-hundred subscriptions needed to print the book, and his goal was never realized. Two "Thorn-Tails" depicts both the male and female black-bellied variety of hummingbirds. The term "Langsdorff" that Heade applied to the painting refers to the Russian consul in Rio de Janeiro who discovered the species. Though Heade's hummingbird paintings owe a debt to traditional ornithological illustration, the artist transcended convention by setting the birds within verdant natural landscapes. In Two "Thorn-Tails," Heade places the birds in a mountainous environment presumably surrounded by indigenous flora and fauna. The clouds, which cover much of the blue sky, hover over the mountains and enhance the atmospheric mood of the scene. There is only one other extant painting featuring the same species entitled Thorn-tails, Brazil (c. 1864-1865), in Chattanooga, Tennessee's Hunter Museum of Art.