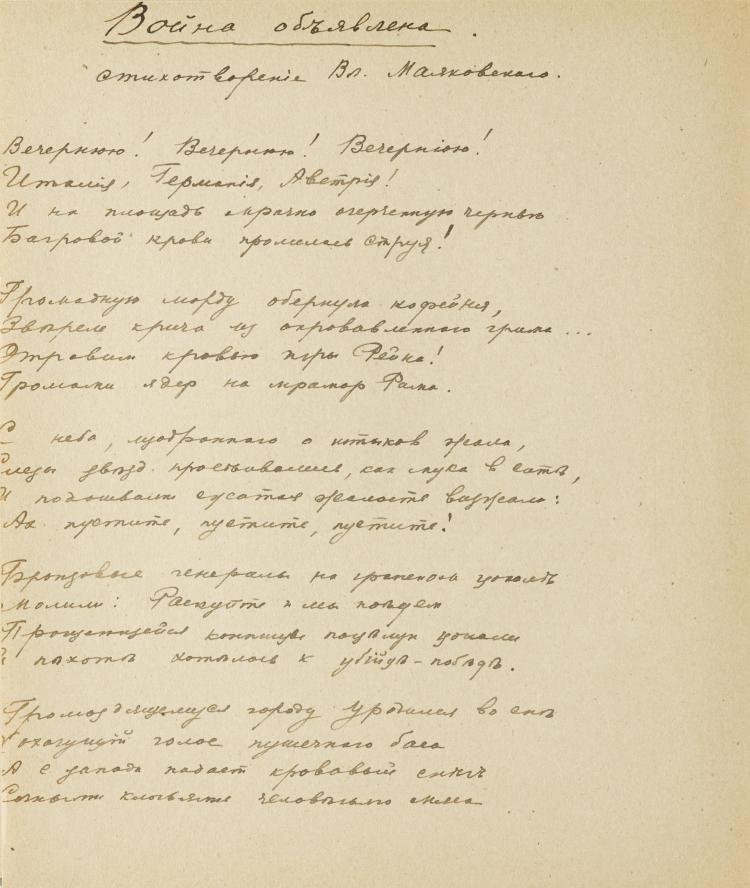 "Voina obyavlena" [War Is Declared]. Autograph Manuscript, 1 p, written in a copy of Trebnik troikh [Missal of the Three] (Moscow: G. L. Kuzmin and S. D. Dolinskii, 1913).With 13 lithographs by Mayakovsky, Tatlin and the Burliuk brothers.8vo.88 pp.Later green boards with the original gray wrappers bound in.Pages trimmed and loose, minor foxing with some internal pencil marks Provenance:Private collection in Moscow. Like many of his fellow Futurists, V. V. Mayakovsky at first embraced the First World War but soon took an anti-militaristic stance toward the conflict."Welcomed it with great anxiety," he recalled."At first just from the standpoint of décor and bluster.Did posters on commission--quite militaristic, of course.Later in verse, 'War Is Declared.'"On July 21, 1914, only three days after war broke out between Russia and Austria-Hungary and one day after he wrote the poem, Mayakovsky presented "Voina obyavlena" for the first time at a public reading at the statue of General Skobelev in Moscow.He tells how newsboys urge the public to get their evening papers of the latest news from Italy, Germany and Austria."And in the square, darkly outlined by the mob," he writes, "A jet of crimson blood is spilled."The poem was first published in the periodical Novaya zhizn [New Life] (August 1914, p 3) and later included in the miscellany Vesennee kontragenstvo muz [The Vernal Forwarding Agent of the Muses] (1915).In his pioneering study Russian Futurism: A History (1968), Vladimir Markov called "Voina obyavlena""the most artistically successful" poem in the anthology and "a masterpiece of 'phonetic' stridor" (p 286). Independent scholar Vladimir Vladimirovich Polyakov, the author of Russkii kubofuturizm [Russian Cubo-Futurism] (1995), Knigi Russkogoi kubofuturizma [Russian Cubo-Futurst Books] (2007) and other works, has identified the handwriting of this manuscript poem as Mayakovsky's.No working drafts survive for "Voina obyavlena" or for any other of Mayakovsky's poems of this period, so Mr. Polyakov has compared the handwriting to that ofdedicatory inscriptions and official documents.Particularly relevant are Mayakovsky's petitions to Moscow's Department of Defence of Public Security, to the Director of Muzhviz and to Rector of the Higher School of Fine Arts at the Academy of Fine Arts."In addition to the typical light tilt to the right, and the general uniform pacing of the letters with duplicate connecting elements between letters," he explains in his report on the manuscript, "the manner of writing some letters stands out--first of all, specific scrollwork in the script. Most striking in this regard is a bend, which stretches to the top of the letter 'v' in the signature under the poem; also indicative is the shape of the oval elements. Both of these details are analogous to the poet's autographs of the 1910s."He further writes, "Apparently, the manuscript was executed in late July or early August 1914, before the publication of the poem in the magazine ... This is confirmed by the fact that our version is identical to the one that was published in Novaya zhizn. In later editions the poem appears in the final author's version (see Mayakovski'sSobranie sochinenii, Vol I, Moscow: OGIZ, 1927). The main difference between this version and the later one is the first two lines of the second stanza ('Громадную морду обернула кофейня/Зверем рыча из окровавленного грима'). In the final version, the poet places instead the following lines: 'Морду в кровь разбила кофейня,/зверьим криком багрима....'"As there is no presentation inscription in this book, it might be assumed that it is the poet's personal copy with the new poem written in the volume possibly for a new expanded edition of Trebnik troikh or for use in Vesennee kontragenstvo muz or even a public reading.Documentation will be supplied upon request.