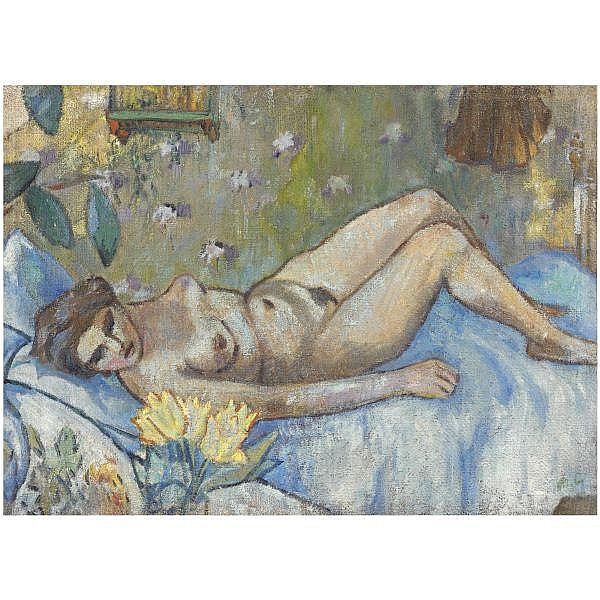 signed with initials in Latin l.r. oil on canvas

Acquired directly from the widow of the artist, Alexandra Tomilina, by the previous owner

PROPERTY FROM A PRIVATE EUROPEAN COLLECTION
Executed circa 1906-1907 Ilya Zdanevich, who wrote the first biography of Larionov and Goncharova using the pseudonym Eli Eganbiuri, divided Mikhail Larionov's career into three main periods: the Impressionist period (1901-1906), the Primitivist period (1907-1911) and the Rayonist period (1911-1913). Zdanevich tells us that, in 1901, Larionov "became acquainted with the work of Monet, Degas, Gauguin and Cezanne, and started working in their style, thus becoming one of Russia's first impressionists". During the 1900s Larionov regularly travelled to his home town, Tiraspol, for the summer, where he worked a great deal from nature. These early compositions are very naturalistic in their use of colour and there is a palpable sense of aerial perspective. As Larionov's Impressionism developed, the colours of his brushstrokes became increasingly similar, leading to what the critic Nikolai Punin described in the mid-1900s as a 'unity of painted surface'. In 1906 Diaghilev invited Larionov to travel to Paris, where he saw the latest French painting in all its variety: Gauguin's posthumous retrospective, Cezanne, the Nabis and the Fauvists. All this made a strong impression on Larionov and inspired him to develop the new techniques which were already becoming evident in his work; he finally moved away from 'coloured dust' (as Larionov himself described it), used to create form, towards Fauvism's 'intensification of colour'. The work offered here for auction is painted on a canvas with a coarse grain, similar to sackcloth, to which the artist has applied a primer. There are many layers of paint, as well as areas in which the base coat and canvas are visible. The inscription on the reverse of the canvas, added much later, dates the work to 1902, the earliest phase of Larionov's career, when he was still learning his craft. But this period is characterised by a narrower and more restrained range of colour and elements drawn from sketches from nature. This description also leads us to believe that the picture was painted in Odessa. Larionov probably spent as much time in Odessa as in Tiraspol, where he spent his summer holidays until 1910. It was here in the south of Russia that Larionov painted his series of bathing women between 1904 and 1906. The angle of the woman lying on a white sheet with blue highlights is simultaneously both traditional and complex. The set-up and pose of the model in this painting would later be the departure point for Larionov's famous series of Venuses in 1912. The artist endowed them with recognisable characteristics: a generalised form contained within a broad outline, a fairly limited palette of colours and a rejection of depth (fig.1). One can see a comparable structure in the layers of colour in A Provincial Dandy (1907-1909) and A Walk with a Rose (1906-1907) (figs.2 and 3) and at the same time one can also feel the 'impressionist shimmer' in his painting. Stylistic considerations give good reason to suggest the picture was painted during the so-called 'proto-Primitivist' period, when Larionov was moving from Impressionism to his synthetic phase.