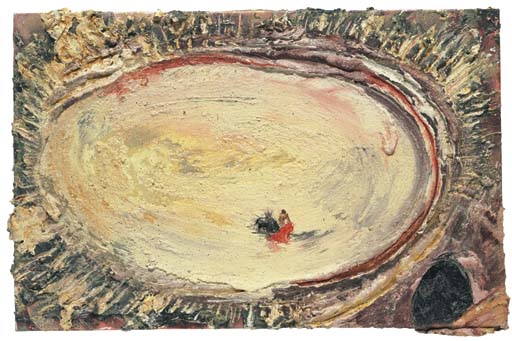 Galerie Bruno Bischofberger, Zurich.
Acquired directly from the above by the present owner in 1992.

Barceló's Pase de pecho, painted in 1990, flawlessly evokes the grit, the excitement and the elegance of the arena. The glint of the sand, the red flash of the muleta as it is swung before the charging bull, all combine to give this painting an intense dynamism. The composition itself, with the matador and the bull isolated in the vast central space of the arena, translates the importance of this moment, and the fact that to the bullfighter, to the spectators and to the bull, all of existence, all that their minds are filled with, is this moment, this showmanlike pase de pecho of the title, with the matador swinging the muleta before the bull at chest height. As he defies death or injury once more, masterfully playing the bull, so the canvas is ripe with impasto, its pulp oozing almost flesh-like, as though Barceló has managed to paint with daubs of raw and fragile life.
Pase de pecho is one of an important series of paintings that Barceló executed in the summer of 1990 in Mallorca, having already designed posters for various bullfights both in Spain and France. This provided an interesting foil to much of the work that had characterised his input of the past couple of years, during which he had been heavily influenced by his increasingly frequent trips to sub-Saharan Africa. There, he had managed to refine his art, to escape what he sometimes viewed as the constraints of the Western artistic tradition. However, Barceló had been immersed in the history of art, in Old Masters, and in Spanish painting from a young age. Here, on returning to Europe, he appears to have adopted a quintessentially Spanish theme - that of the tauromachy - and to have presented it in a manner that pays homage to his artistic ancestors, even down to a colour theme reminiscent, with the muleta, the costume and the sand, of the Spanish flag itself. Although the edges of the painting appear blurred and masticated, there remains enough detail that the viewer is left in no doubt as to the artist's devotion to his theme. Even the supine arch of the torero's back as he, with feigned nonchalance, completes his pass, shows Barceló's intense attention to detail both in life and in art, reflecting the virtuosity of two artists: one within the ring and one before the canvas.
This devotion to los toros has long had an important place in the development of Spanish art, but was perhaps best shown in the works of Goya and of Picasso. Indeed, Goya's Tauromaquia, which was an almost exhaustive exploration of the theme of the bullfight, can be seen as a precedent for Barceló's series of paintings of the same subject and is a venerable ancestor at that. The links between Goya's and Barceló's works go beyond the thematic. Not only do they explore many aspects of the action and the pageantry of the bullfight, but they also share some parallels in the manner in which these are condensed into images that make an impact on the viewer. In many of Goya's prints on the subject, he almost entirely avoided giving any sense of the background, or even the arena, preferring to concentrate upon the action itself. The fight was the all. So here, although Barceló gives a sense of the solidity of the ring, of its monumentality, it is deliberately obscured so as not to distract us. Again, the fight is the all. He has even fashioned the impasto in such a manner that he further directs our attention towards the bull and the torero, giving a vague sense of the stalls, but really forming discreet arrows that guide our eyes.
The overt link in the subject matter and the treatment in Pase de pecho show Barceló embracing the artistic canon once more, and sinking his teeth into a truly Western, and indeed Spanish, theme after the dominance of the African themes. It is important to note that it was also in 1990 that Barceló travelled to Switzerland to observe and paint glaciers. Barceló was still, be it in Africa, Switzerland or in Pase de pecho, trying to strip away superfluities to depict something raw, vital and real. Despite the clear return to tradition in reprising the theme of the bullfight, there is also an intense sense of originality. There is an immediacy in this painting that appears to owe little to any forerunner, Barceló reacting in an uncontaminated manner to the spectacle of the bullfight itself. The swirl of the paint, the gouged impasto, evoke the artist's own intense labour and exercise in creating - sculpting - this painting. For in the same way that every day in Africa was a struggle with life and with the elements, so here, in the arena, we find a man facing Nature. However artificial the circumstances may be, there exists nonetheless this intense and vital bond between man and beast, each holding the fate of the other in its power. Condensed and bottled for the Spanish public, the struggle is no less real, and this is accentuated by the torero's isolation in the middle of the sand. This tiny yet epic battle is a world in its own right. On the one hand, Barceló's series of bullfighting paintings shows his interest in the ceremonies that have sprung up around this battle, the customs and the pageantry. But more crucially, this sense of the bullfighter's complete absorption in the task at hand acts as a metaphor for Barceló and the act of painting. For however much the artistic tradition, and artistic heritage, may have influenced the creation of these paintings, their execution is an act of life. Barceló lives for and through his painting, and all else falls away while he creates them: 'As in bullfighting, I believe, one doesn't paint with ideas. The painting happens outside ideas, in contradiction to ideas even, generating ideas' (Barceló, quoted in Miquel Barceló 1987-1997, exh. cat., Barcelona, 1998, p. 112).