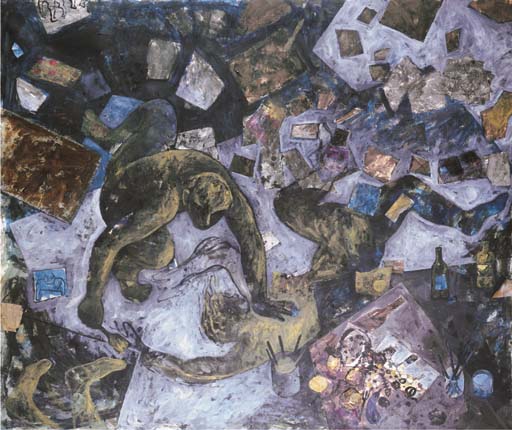 Acquired directly from the artist by the present owner.

PROPERTY FROM AN IMPORTANT EUROPEAN COLLECTION

With its swirling verve and momentum, Barceló's 1983 Autorretrato shows the artist painting himself on a canvas spread on the ground. By choosing to show himself painting one of the figure's outstretched hands, Barceló gives the picture the appearance of a dance. The two Matisse-like figures are caught, seemingly hand in hand, in dynamic union, a seeming whirlpool of activity on the canvas which engages and draws in the viewer's gaze.
The fact that this Autorretrato shows Barceló in the process of painting an Autorretrato makes this an intensely absorbing and self-referential work. During the earlier part of his career, Barceló revelled in culture, as is reflected both in the scattered books on the floor and his frequent paintings of libraries. Likewise, ever a lover of art, he painted galleries, especially the Louvre, and glutted himself on the Old Masters. It is therefore only natural that in painting himself, he should choose to depict himself painting, as an artist, in the tradition of Velázquez.
During 1983, Barceló moved into a huge new studio in a disused church in Paris. While he had already worked occasionally on a large scale, it was only now that he became regularly able to paint on vast canvases. His works were immediately filled with an exuberant sense of release. He would, as shown in Autorretrato, lay the canvas on the ground and paint it in that position. This involvement with his picture, as he enthusiastically dances around and upon his canvas, conjuring up his own image, is captured with sweeping energy in Autorretrato. The fact that he records himself in the act reflects his own interest in and love of this interaction.
It is not only the vortex of activity in Autorretrato that draws in the viewer, but also Barceló's use of mixed media in his work. The heavy impasto and the various incorporated elements add a great deal of texture to the painting, making it sculptural, as though this image were bursting into a third dimension. In this way, and through the incorporation of 'real' objects from the real world, Barceló manages to blur the lines between the world represented and the world of the viewer. This feeling is heightened by the sheer monumentality of this canvas, which dwarfs the viewer. Just looking at this picture becomes an intense and interactive process in which we are drowned in the world of the painter.