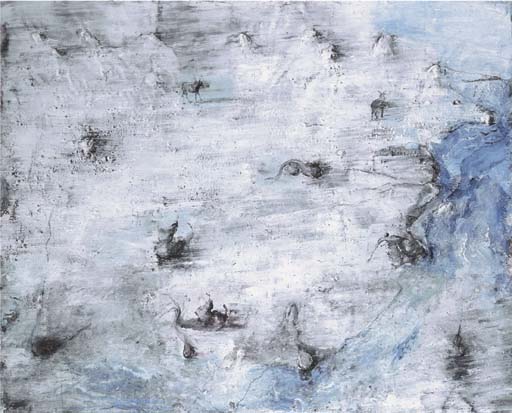 Galerie Bruno Bischofberger, Zurich.
Galerie Yvon Lambert, Paris.
Acquired from the above by the present owner in 1990.

THE PROPERTY OF A EUROPEAN GENTLEMAN

In España económica, Barceló presents us with an expressionist map of his homeland, Spain. The Eastern coastline of the Iberian peninsula clearly snakes down the right of the picture, the blue of the Mediterranean seeming to break against the shores. To the North, in relief from the canvas, we see the Pyrenees. This is a relief image that is part map, part personal memory for the artist.
In the wake of his first voyage to Africa in 1988, Barceló had created a large number of landscapes based on the desert that he had seen there. In fact, a dazzling whiteness had come even before then to dominate his canvases, and it was this that had prompted him to go to Africa, to see the genuine article. In España económica, we see this interest in whiteness still in the ascendant. The content of the picture has been stripped away, perfectly recalling the desert pictures.
In part, what Barceló had sought to remove in these paintings was his almost umbilical link to tradition and to the old masters. Barceló had glutted himself with the art of the Prado and the Louvre. These galleries had even been represented in a series of paintings from the mid-1980s. Barceló was trying to remove his preconceptions, his trained and taught ways of seeing, in order to discover a more authentic and direct means of representing the world. The whiteness of his paintings allowed the artist to start from scratch and to truly harness the essence of his subject. Concurrent with this quest was Barceló's revived interest in Europe and in Spain, culminating in the bullfight pictures he painted only shortly after this. España económica combines all these strands of his art: here we see the Spanish desert, but also the character of the country, thrown into relief against the luminous background. This is the essence of Barceló's art and also Barceló's Spain.
España económica's mainly white landscape is articulated only by scattered markers like the creatures and the coastline. These appear to be personal reference points, markers from a visual lexicon that is filled with the artist's own associations rather than strict geography. Much of this map of Barceló's homeland is filled with a poignant emptiness, recalling the unknown portions of the world on the maps of old. Likewise, the scattered indications of life, the donkeys and other features, remind us of these antique attempts to chart the unknown with pointers such as 'Here be dragons'.
Early in 1990, Barceló had designed and created the set for the opera El retablo de Maese Pedro el organista in Paris. Barceló himself has explained the design he created: 'Spain could be seen in perspective from a dovecot, and everything was white as if covered in pigeon droppings... It was a miniature world, just like my pictures at that time' (Barceló, quoted in Miquel Barceló: Obra sobre papel 1979-1999, exh.cat., Madrid, 1999, p. iv). In España económica, Barceló has continued to explore the same theme, depicting his homeland. However, rather than expanding the perspective to an absurd extreme, he has flattened the world to create a map.
This flatness was, in the creation of the work, literal: Barceló paints his larger works with the unstructured canvas placed on the ground. He walks around, and on top of, the picture. Thus, in forming this map of Spain, he himself has been treading the miniaturized deserts and distances that he has created. This intense interaction and interplay between the artist and his picture is therefore physical as well as psychical.
Barceló's painting is a physical act, and results in an extremely physical surface. In España económica, we see rich, sculptural impasto adding an expressive edge to the features of the map. This pushes the painting into our world. It is not two-dimensional, but instead bursts from the wall. The introduction of mixed media elements further blurs the boundaries between our world and the world of the picture, creating more and more shared territories. The process of viewing, of noticing these elements within the picture, of inspecting the surface texture, becomes a process of recognition, as we are drawn further and further into it.
These elements, and the artist's use of paint, highlight the almost organic process of creation that has lead to España económica. Intriguingly this work, painted in April 1990, hints at the creation of his glacier paintings, executed in Switzerland later that year. These paintings, like España económica and the desert pictures, allowed the artist to further explore his interest in wide, white space, in the blank canvas of nature itself. The glacier works were also noteworthy for the means of their creation: Barceló often ensured that the paint would pour and drip and move on the canvas, mimicking the process by which a glacier is made. So in España económica, we see an early indication of this technique. The attrition by which the palpable surface of the picture has been eked into existence reflects the ancient and slow geological process by which Spain itself has been formed. This picture is therefore filled with a life that reflects the very real life of the nation.
Barceló himself described this organic process, through which his greatest paintings have come into existence:
'Methodology.
I build a small miniature universe and I observe its development.
Simple systems generate great complexity.
It moves everywhere, never in the same way, as if it had stopped somewhere.
Endless self-reference, like a cauliflower, a brain, a cloud, a galaxy. Order produces locality
Disorder produces universality
To go through the darkness and leave a trace of light.
The bicycle which has a light in back but not in front; the artist who eats darkness and shits light' (Barceló, 2 January 1992, ibid., 1999, p. X).