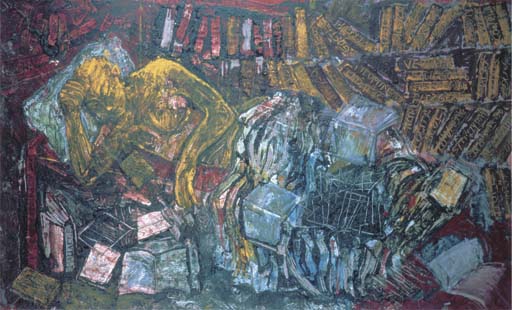 Painted in 1984, Furnish Dreams is a monumental yet personal representation of aspects of Barcelós own life, and as such reflect the intense developments that were coming to mark the artist and his art during this key period. Barceló had moved to Paris the previous year, and subsequently had occupied a church on the rue d'Ulm for use as a studio, affording him a far greater space, and therefore liberty with the pictures he was creating. Barcelós studios and surroundings hold a great sway over his art, as is clear in the sense of space in Furnish Dreams: the two-dimensionality and flatness that had characterised so much of his earlier work has now been eschewed, replaced by a greater sense of physical space. In this way, the library before us becomes a believable space, the painting an invitation into the artists own world. Likewise, the intense plasticity of the paint surface lends Furnish Dreams a physicality, allowing it to border and even seep in to our own world.
During the early 1980s, Barceló was consumed by a thirst for knowledge and culture, a thirst that was increasingly slaked after his move to Paris in 1983. Furnish Dreams was painted at a time when the intense depth of the culture in which he was steeped led to much of Barcelós output reprising the subject matter and even composition of the Old Masters, especially those to which he was exposed now in the French capital. This influence was especially evident in the form of his almost allegorical still life images. Alongside that theme, literature and the Louvre came not only to flavour, but also to feature in many of his paintings from this time. Barceló himself explained that the themes of the Louvre and the library were more autobiographical than many of his other paintings: 'These are subjects that underline my rapport with culture in general. For me, the necessity of cultural immersion is extremely strong. I can spend long hours in the Louvre or reading in my library' (Barceló, quoted in Miquel Barceló: Peintures de 1983 à 1985, exh. cat., Bordeaux 1985, p. 84). On the spines of the books we are presented with a wide array of writers names - Mallarmé, Goethe, and Verlaine. Barceló reveals his wide range of interests, his own erudition and his love of literature. The reader, asleep in the painting, appears glutted on information, perhaps already reflecting Barcelós own realisation of the extent to which he had immersed himself in Western culture, a realisation that would soon lead him to seek out the wildernesses of the Alps and the Sahara. In the meantime, intoxitated by the cultural wealth at his disposal, Barceló celebrates life and literature in Furnish Dreams.