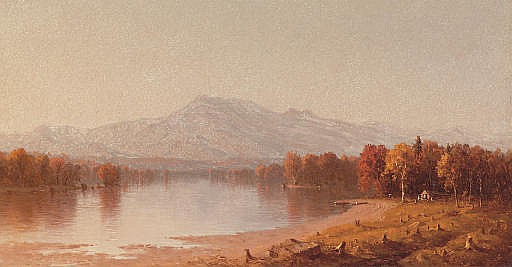 (Possibly) Sale: Thomas E. Kirby, Auctioneers, Gifford Estate Sale, Part 1, April 12, 1881, no. 85 (as A Lake in the Wilderness, a Sketch ).
Douglas B. Collins.
Vose Galleries, Boston, Massachusetts.
Acquired by the present owner from the above, 1973.

In Moat Mountain, New Hampshire , Gifford presents a bucolic scene set against a dramatic backdrop of the venerable mountain, presenting a landscape full of the promise and potential of the 1860s. In the distance, to a clearing of tree stumps, a woman in an apron stands outside a log cabin as she watches two figures in canoes at the edge of a lake. The stumps are clearly intended to communicate to the viewer that the figures are pioneers in the wilderness. Gifford presents an image of American settlement in combination with his vision of an untouched and bucolic New World. Moat Mountain, New Hampshire is as much a picture about this assimilation, as it is a picture of the land itself. Gifford leads us through this placid scene with autumnal hues in the foreground, a tinged blue mountain in the middle ground and beyond to the pink sky of the background. The sheer beauty of the landscape underscores Gifford's primary message that this is a promised land.

Gifford completed several small pencil and oil sketches depicting similar views of Moat Mountain during the late 1850s and early 60s as preparative studies for larger, finished works. In a letter dated October 7, 2007, Dr. Ila Weiss discusses Moat Mountain, New Hampshire , "In 1854 Gifford did a contour study of the multi-peaked mountain from a height above the Saco Valley to the east inscribed, "Mote Mt. 16 Sep." (Sketchbook, Albany Institute of History and Art). This may have been the genesis of a painting exhibited at the Pennsylvania Academy in 1856 implausibly titled "Motto Mountain," now lost. It was also the point of departure for Mote Mountain from Echo Lake, New Hampshire of 1863, 12" by 20" which was preceded by an oil sketch of the same title, 10¼" by 17". In both an invented repoussoir of boulders and trees at the right provides a weighty, substantive foil for a view of tepees and Indians at the shore below (with a beach provided for canoes in the larger version), idealized beyond a veil of luminous air. The mountain, almost dissolved in the cool iridescence of the sky, is doubled in the mirror-lake.

"Eleven years later Gifford returned to the same spot and did an almost identical pencil contour study inscribed 'Mote Mt. Sept 4th 65' (Sketchbook, Vassar College). That same day he did a tonal drawing of the mountain from Echo Lake, including woods and rolling hills at its base. Its mountain profile differs from that of the elevated view in showing the left or southernmost of the two prominent peaks as the highest, a perspective illusion. This drawing was the point of departure for the more intimate, accessible scenery of the painting under consideration. The painting imagines the view from a rough clearing of tree stumps on the shore of the lake that recedes at the right to a log cabin at which a woman is standing, her apron succinctly suggested by a dab and dot of warm white. She watches two figures with boats at the water's edge, one providing the pinpoints of color of a red shirt and its reflection. In this version a different chapter of American history is pondered, the Indians of the wilderness having been replaced by pioneers in the wilderness, with whom the artist had familial associations. As Gifford told Octavius Brooks Frothingham in 1874, 'My ancestors in this country were among the earliest settlers of New England In 1794 my grandfather settled in Greenfield, Saratoga Co., then a wilderness, where he cleared a farm and built a tannery.' Gifford's revered older brother Charles moved to Wisconsin where he, too, domesticated wilderness. In 1850 Gifford drew Charles' house at the edge of the woods beyond tree stumps. The painting's cabin, similarly situated, is gloriously framed by autumnal trees in jewel-like tones of salmon-oranges and amber-yellows, suggesting its personal implications."

The optimistic promise of nature's presence in Moat Mountain, New Hampshire springs from many influences. Foremost, Gifford's work draws upon many of the themes from the Luminist movement, a term assigned to a group of landscape artists working in the middle to second half of the nineteenth century, including Fitz Henry Lane, Martin Johnson Heade and John F. Kensett, among others. These painters' landscapes were characterized by the effect of light, creating poetic atmosphere through the use of aerial perspective, a minimization of visible brushstrokes, and most profoundly, the manifestation of religion in nature. Barbara Novak notes that, "Luminism was the most profound expositor of transcendental feelings toward God and nature and God as nature." (in J. Wilmerding, American Light: The Luminist Movement, 1850-1875 , Washington, D.C., 1980, p. 28) Moreover, Novak "links to Emersonian transcendentalism the Luminist's distillation of light as a concentration of divine presence--more in the pictures of calm, glassy clarity rather than ones of vibrating, exotic color." ( American Light: The Luminist Movement , p. 17) Whether in landscapes of dramatic light or precision of detail, paintings from this era inevitably sought a deeper meaning of nature's spiritual existence.

With the mountain looming over the settlers, in Moat Mountain, New Hampshire , Gifford connotes the merging of man's corporeal world with nature's ethereal world. Man's world is rendered in earthbound tones of oranges, reds and browns while the mountain is enveloped in a blue haze surrounded by a light pink sky. Working to develop paintings beyond the more traditional Hudson River School format, Gifford integrated into his works the broader themes of Jacksonian manifest destiny along with the transcendent spiritual beauty of nature. Moat Mountain, New Hampshire is exemplary of Gifford's reverence for nature as well as the people's settlement in the midst of nature during the nation's expansion. Overall, Gifford eschews dramatic painterly effects to emphasize the rich light, enhanced by aerial perspective depicted with subtle brushwork. The emphasis is a nature created by God, not one fabricated by the artist. Moat Mountain, New Hampshire presents a hopeful promise for a changing nation's future. While creating a powerful and grand scene of God's nature, Gifford has also presented a picture of quiet solitude, as these pioneers effectively assimilate into an overwhelming expanse of wilderness. Moat Mountain, New Hampshire is a deeply profound work and a stunning representation of the artistic, political and social influences of Gifford's day.