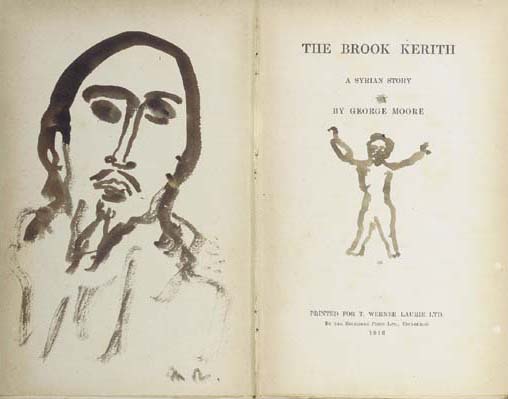 8° (225 x 140mm). (Browning at edges, some spotting.) Original half cloth with polished calf cover (unglued), polished calf case, spines gilt. With 6 gouaches signed (ML) by Mikhail Fedorovich Larionov (1881-1964) - two of Christ on endleaves (one in brown and white, one in brown), one other portrait, figure of man on title page, floral decoration, topped by crucifix and star, around dedication on p.iv, crucifixion scene on final endleaf. Provenaces: Winifred Henderson (bookplate) -- purchased from Beauchamps, London, 14 January 1912, £8.

FIRST EDITION, FOURTH IMPRESSION. Larionov was a Russian painter, stage designer, printmaker, illustrator, draughtsman and writer, and a leader of the Russian avant-garde before World War I. In 1914 he emigrated to Paris and by 1915 he had given up painting. He became well know in the West as the designer for Diaghliev's Ballet Russe. Winifred Henderson was for a time, following the bankruptcy of her own Aquila Press, the manager of Nancy Cunard's Hours Press in Paris (c.1930-1931). Cunard had known George Moore since childhood when he had been a frequent guest of her mother's, Lady Cunard, at Nevil Holt in Leicestershire. He had encouraged Nancy's literary interests and insisted on being the Hours first author (in 1928), in order to start her press off with, as he said, 'a good bang'. It had been her wish that he would also be the press's last author when she decided to close in 1931, but he refused her permission to publish his prose-poem The Talking Pine, rupturing their friendship.

No VAT on hammer price or buyer's premium

The Halsted B Vander Poel Collection of English Literature