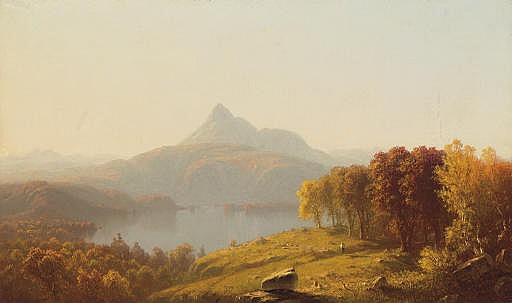 Property from a Southern Collection

On occasion, Christie's has a direct financial interest in lots consigned for sale which may include guaranteeing a minimum price or making an advance to the consignor that is secured solely by consigned property. This is such a lot. This indicates both in cases where Christie's holds the financial interest on its own, and in cases where Christie's has financed all or a part of such interest through a third party. Such third parties generally benefit financially if a guaranteed lot is sold successfully and may incur a loss if the sale is not successful.
Most recent historians have acknowledged Sanford Robinson Gifford's brilliant light as the central aspect of his oeuvre , and the one that unifies his work with the other artists of his time. "Atmosphere," writes one historian, "--the palpable representation of space, with its sublimated contents, so emphasized by Durand in his 'Letters on Landscape Painting' as the sign of true mastery of the landscape art--is the indissoluble link that connects the Luminism of Kensett, Heade, and Gifford with the Hudson River School. (J. K. Howat, et al., American Paradise: The World of the Hudson River School , New York, 1988, p. 47)

His friend and fellow artist J. Ferguson Weir also wrote in 1880, "Gifford loved the light. His finest impressions were those derived from the landscape when the air is charged with an effulgence of irruptive and glowing light." ( American Paradise: The World of the Hudson River School , p. 220) Gifford's contemporary Henry T. Tuckerman called the artist "a noble interpreter of American scenery," and praised his idealization of "the wilderness, and his elevation of landscape painting to a higher, even poetic plane...His best pictures can be not merely seen but contemplated with entire satisfaction...they do not dazzle, they win; they appeal to our calm and thoughtful appreciation; they minister to our most gentle and gracious sympathies, to our most tranquil and congenial observation." ( Book of the Artists , New York, 1967, pp. 524-25)

Regarding the present painting, Dr. Ila Weiss writes that, "Mount Chocorua, New Hampshire is an important painting which is closely related to Summer Afternoon ( circa 1855, oval 30 by 42 inches, Newark Museum), which Gifford exhibited at the National Academy of Design in the Spring of 1855. Mount Chocorua, New Hampshire was probably a preliminary study for the exhibition-piece, finished almost ten years later for sale and dated in 1863, which was in keeping with Gifford's practice." In discussing Summer Afternoon , Dr. Weiss states: "The mountains, scarred by time and glorified in pink air, float on mirrored, horizontal bases of forested wilderness. The overtly calculated composition, with its darkly exaggerated foreground offsetting the protagonists' removed, spotlit stage and the dreamy distance, dilute actuality and invite contemplation. The image is at once a paraphrase and update of the distance of Cole's Arcadian State and Course of Empire. Whereas Cole's mountains are incidental to a historical fantasy. Gifford's are centered, dominant, apotheosized." ( Poetic Landscape: The Art and Experience of Sanford Robinson Gifford , Newark, Delaware, 1987, p. 187)

Mount Chocorua, New Hampshire depicts the mountain rising beyond Bald Mountain with a small, isolated figure at right overlooking Chocorua Lake, behind which towers Chocorua peak. A large rock formation in the foreground provides a sense of stability to the composition. The warm autumnal coloring of the blazing yellow and red-orange trees are contrasted with the cool gray-blue haze surrounding the mountains in the background. Gifford uses a color progression from the darkness of the shadows in the lower corners to the golden landscape to the white sun and pale blue sky. This white sun is haloed by pale yellow, then pink, then the pale blue in the upper corners. The artist has combined realist-style detail in the landscape with romantic fantasy, as the mountain is dreamily unfocused in the background. Gifford creates a powerful scene transforming a landscape into a dramatic rendition of nature and through his rich depiction of Luminist light, he suggests a transcendental notion of the passage from God to Nature to Man.

Sanford Robinson Gifford's superb renderings of the nineteenth century American landscape are exceptionally articulate visions of nature. Gifford's compositions, complemented by the artist's ingenious use of light to convey emotion, are among the boldest conceived in the nineteenth century. His style shares the Luminist artist's preoccupation with light, atmosphere, and attention to detail. As the art historian John Wilmerding concludes, "Sanford Gifford developed a modification of the picturesque composition that enabled him to emphasize his major concern and master subject, the effects of light and color. He selected and modified views to create bowls of the landscape to serve as containers for the light-filled air...The clarity of the trees in the foreground are in contrast with the veiled forms in the distance. Gifford believed that 'the really important matter is not the natural object itself, but the veil or medium through which we see it.'" ( American Light: The Luminist Movement 1850-1875 , Washington D.C., 1980, p. 36)