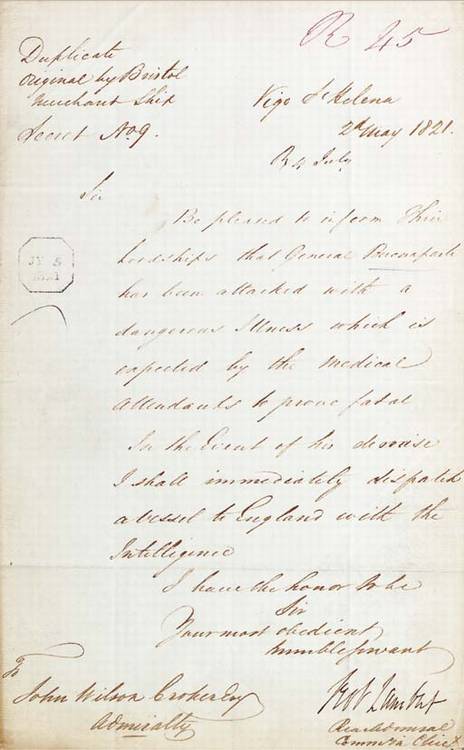 "THE BODY APPEARED VERY FAT..." THE STOMACH "A MASS OF CANCEROUS DISEASE": THE AUTOPSY REPORT FOR NAPOLEON BONAPARTE

As Napoleon lay dying of cancer on St. Helena, the commander of the British garrison there, Rear Admiral Robert Lambert, prepares his superiors in London for the momentous news. On 2 May, Lambert reports that "General Buonaparte has been attacked with a dangerous illness which is expected to prove fatal. In the event of his decease I shall immediately dispatch a vessel to England with the Intelligence." Five days later he sends another letter announcing that "General Buonaparte departed this life at a little before Six p.m. on Saturday the 5th instant." He also sends along the report of Napoleon's autopsy, which was conducted on 6 May, as if to convince his masters, beyond a shadow of a doubt, that England's military nemesis would never rise again to threaten the crowned heads of Europe. Lambert's documents are the official copies sent to Whitehall, separate from the originals (it was the custom of the time to send originals and official copies on separate ships).

Napoleon himself, on his deathbed, had requested the autopsy, and his personal physician, Dr. Francesco Autommarchi, wielded the scalpel. The figure that terrorized the globe for a generation is merely a pathetic mass of decay and disease under the clinical gaze of the doctors: "On a superficial view the body appeared very fat, which State was confirmed by the first incision down its center, where the fat was upward of one inch thick over the sternum, and one inch and a half over the abdomen." The "lungs were quite sound" and the "heart was of the natural size but thickly covered with fat." Opening the abdomen, the doctors found "the seat of extensive disease." Napoleon's stomach "was a mass of cancerous disease..." (3)

PROPERTY FROM THE COLLECTION OF JEROME SHOCHET

Printed Books and Manuscripts including Americana