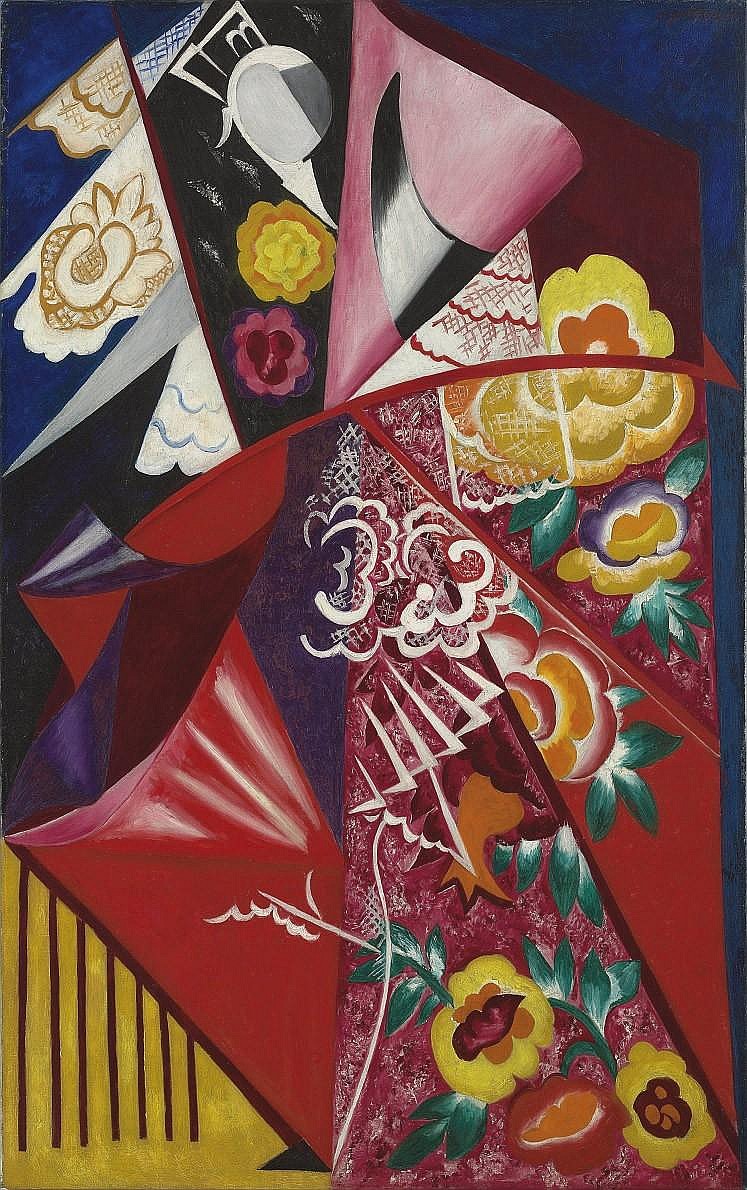 THE PROPERTY OF A PRIVATE SWISS COLLECTOR
VAT rate of 5% is payable on hammer price and at 17.5% on the buyer's premium.
'Time should be divided over a long period in such a way that there should be enough for painting and work for the theatre - these are, of course, inseparable, but painting is an inner necessity for theatrical work, and not vice-versa' (Natalia Gontcharova, quoted in Retrospective Exhibition of Paintings and Designs for the Theatre: Larionov and Goncharova, exh. cat., London, 1961, unpaginated).


An outstanding fusion of Gontcharova's avant-garde art and her much celebrated work for Sergei Diaghilev's Ballet Russes and the Paris stage, Espagnole is a rare and spectacular painting that she made in Europe during the First World War. An essentially abstract combination of Cubo-Futurist form and structure with the details and patterns of the costume of a Spanish dancer, it is one of a groundbreaking series of works that merged the two great disciplines for which Gontcharova is best known - painting and theatre design - into a unique expression of both.

Espagnole derives from the period when the outbreak of the First World War in Europe led to a dramatic shift in the direction of Gontcharova's artistic career and ultimately to her leaving Russia to settle permanently in Paris. In 1914, after her husband Michail Larionov had been invalided out of the Russian army, Gontcharova - as the then leading avant-garde artist in Russia - was invited by Sergei Diaghilev to design the sets and costumes for his production in Paris of Coq D'Or. This Rimsky-Korsakov opera took the form of a ballet with chorus, which employed the décor as an integral part of the action. The singers were grouped in pyramidal masses on either side of the stage, and the whole scene was rendered in the festive reds and yellows of Russian icon and folk art.

Having already experimented in blending Western avant-garde style with Eastern Folk art in her paintings, Gontcharova here easily combined Cubist simplification with the rich ornament of traditional craftsmanship, in a way that came to completely change the sumptuous naturalism of all Diaghilev's previous productions, and established a radical new technique that later came to be known as theatrical Constructivism. Gontcharova's outstanding ability to seamlessly fuse the dynamic language of her Cubo-Futurist paintings with the colours, forms, motifs and traditions of Folk art and dance into a dramatic whole, not only established her immediately as a stage designer of genius, but also led to an important sequence of further commissions and a long association with the Ballets Russes. It also prompted Diaghilev to enter into important collaborations with other leading avant-garde artists of the day. Guillaume Apollinaire, who became a friend and champion of Gontcharova at this time, wrote of her work that she 'commands an aesthetic in which the great and intellectually satisfying truths of today's scientific art are combined with the appealing subtleties of Oriental art. To this, Mme. Gontcharova has added, first, the modern harshness contributed by Marinetti's metallic futurism and, second, the refined light of rayism, which is the purest and newest expression of contemporary Russian culture' (quoted in L. Breuing (ed.), Apollinaire on Art: Essays and Reviews 1902-1918, Boston, 1972, p. 413).


Espagnole is one of extremely few paintings that Gontcharova made in the immediate aftermath of her first successful foray into the theatre, he and at a time when she was fully absorbed in this new development in her career. Indeed, with its fusion of the near-abstract Rayonist and Cubo-Futurist form that had distinguished her paintings in Russia, and in its adoption of the theme of a Spanish Dancer - one that she would develop to the point of obsession in the early 1920s - it is a work that appears to relate directly to her work for the next two Ballet Russes productions: España and Triana.

España and Triana were two Spanish-themed ballets that, although never performed, were to have a major impact on the development of Gontcharova's art. Having moved to Switzerland in 1915 and later working in both Italy and France before moving permanently to Paris, Gontcharova spent much of this period working on the costumes and sets for these Spanish-themed ballets. In particular, after a visit to Spain in 1916, she became so captivated by the costumes and mantillas of the Spanish dancers she had seen there that this subject was to dominate much of her later painting as well as her ballet design. The combination of her work on España in particular - a ballet consisting of a series of Spanish dances based around Ravel's music - and her enduring fascination with the costumes of the women she had seen in Spain, ultimately led, throughout the 1920s and early '30s to an extended series of paintings on the theme of the Spanish dancer. This series grew out of the designs and the very small number of paintings and graphic studies on the theme of the Spanish dancers that Gontcharova was able to make at this time. 'I wanted to go to the East,' she later lamented, recalling how little time she had to paint at this time.

One of the largest, most ambitious, and fully resolved of the few paintings Gontcharova ever painted, Espagnole is a highly important painting, that appears to have grown from an idea the artist had originally expressed in the form of a preparatory design for a Spanish costume relating to one of these unperformed Spanish productions. The gouache design, dated by Gontcharova as 1914, but most probably painted circa 1916, was first published under the title Costume Espagnol in the portfolio L'Art Décoratif Théàtral Moderne, published by Larionov and Gontcharova in Paris in 1919. It is thought to relate to a costume idea Gontcharova had had for the ballet España and was to have been worn by the ballerina Catherine Devilliers.

Combining a sense of abstract form, dynamic movement, radiant colour and rich decorative pattern, this large and intensely-worked oil painting, effectively translates Gontcharova's idea for a pochoir into a dramatic, dynamic and essentially abstract construction. An angular layering of colourful form, floral pattern and decorative motif anchored into a collage-like compilation of form - (and actually rendered by Gontcharova in an extraordinary collage version around the same time) - this work captures the full dynamism, energy and colour of a costumed dancer in motion in wholly abstract and decorative terms. An extension in this respect of an artist like Gino Severini's series of studies of the dancer as a Futurist expression of line, motion and colour, Gontcharova's painting incorporates all the exoticism, mystery of the folk roots of traditional Spanish dance into this spectacular painterly construction. Seeming to fold off the canvas plane in the exuberance with which each form interconnects and relates to the other, a three-dimensional sense of arabesque movement that recalls the patterns of the dance is also suggested by the strong conjunction of criss-crossing lines and angles throughout the composition. Collectively all these elements combine to form a complex and condensed kaleidoscope of line, form, colour, pattern and movement that miraculously seems to conjure a powerful sense of all the richness, passion and decorative splendour of a traditional Spanish dance.

This was indeed the impression that these early Spanish-themed works generated on all who saw them in Paris at this time. As S. Romoff humourously recalled, 'While looking at the Espagnoles that Mme Gontcharova has created to accompany Ravel's music, someone who refuses to comprehend Cubism, recently said to me, in a tone of irony, But these are cathedrals my dear!...But, indeed, from the stage these works could only but have given us the impression of cathedrals in motion, cathedrals through which one would see all of Spain, kneeling in mystical faith, an entire population drunk on sunshine and colour' ('Le Cubisme dans l'Art theatral', L'Art , Paris, May 1919, p. 11).