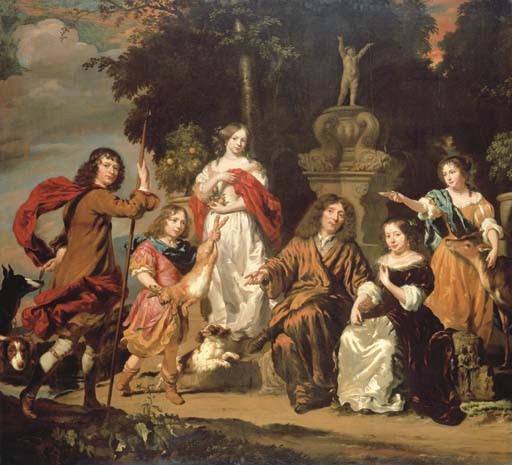 PROPERTY SOLD AT THE DIRECTION OF BRENDA, LADY COOK (LOTS 18-25)

This picture is among Nicolaes Maes's most beautiful monumental group portraits. It was painted between 1675 and 1680, not long after the artist's arrival in Amsterdam and during the period in which he became one of the city's most sought-after portraitists. The deaths of the portraitists Bartholomeus van der Helst in 1670 and Abraham van den Tempel in 1672 made way for new trends in portraiture and the genre changed significantly in the hands of the younger generation. The pastoral setting, the vaguely antique costumes, and the grand scale of this picture all reflect the new fashion and attest to the sitters' wealth and taste. The couple, seated and with arms entwined, gather with their children at the base of an elaborate fountain at the edge of a shady wood and before a view onto an open landscape.

In a departure from the traditional family portrait, Maes's group is characterised by the kind of communication and movement more often seen in history painting. The father gestures to the viewer as if presenting the two boys who have returned fresh from the hunt, a dead rabbit and hounds in tow. The older boy strikes a heroic pose as he strides forward, his staff in one hand and the end of his billowing sash in the other. The mother brings her hand to her chest in a gesture of pride as the young woman behind her holds a shell under the stream of water spouting from the ecstatic putto's mouth above. Four of the six sitters look directly at the viewer as if acknowledging our presence and inviting us to join the gathering. The dog emphasises this connection, pushing its way into the frame and staring out intently from the lower left.

The generalised outdoor setting, the all'antica dress, and the theme of the hunt are all features of the kind of pastoral imagery that was popular around this time. The concept of the pastoral, as described by Virgil in his Eclogues, revolved around the idealised life of the shepherd and shepherdess who live in rural harmony in a simpler time and place, far from the complications of modern city life. It featured in Dutch literature throughout the century and appeared in painting from the early 1620s, first in historical subjects and later in portraiture. Certain types commonly appear in this context, among them hunters, shepherds, and specific mythological figures such as Diana, the virgin goddess of the hunt. As in Godfried Schalcken's Portrait of Magdalena de la Court (see T. Beherman, Godried Schalcken, 1988, p. 165, no. 66), women in court circles were often depicted in the guise of Diana as a testament to their strength and chastity. As with the daughter at the far right of the group, they wear yellow dresses adorned with blue sashes and either hold a bow and arrow or, as in this case, are nuzzled by a wild animal. The daughter's gesture holding a shell under the stream of water, furthermore, recalls that of Granida in P.C. Hooft's pastoral play, Granida and Daifilo. Depictions of this theme often focused on the moment when the shepherd Daifilo encounters the lost and exhausted princess Granida. They sit at the foot of a fountain and Daifilo offers her a drink of water in an upturned shell.

This combination of types and mingling of references is not uncommon in Maes's portraits. The antique dress of the two boys in A Family Group, for example, is combined with the more contemporary dress of the mother, daughters, and father, whose garment, known as a Japonsche rock, was fashionable at the time among gentlemen. Young hunters and mythological figures appear in other of Maes' portraits from the same period, including A young boy as a hunter in Vienna (Akademie der Bildenden Künste) and Four children, one as Ganymede, of 1674, in Dordrecht (Dordrechts Museum). The combination of the abduction of Ganymede by Jupiter in the form of an eagle with such generalised pastoral types as the boy with a bow and arrow at the left and the girl feeding a goat at the right, is similar to the mixed iconography of the present painting. Maes' blending of pictorial and literary references, ancient and modern prototypes creates an impression very different from that in his earlier portraits such as The family of Job Jansse Cuyter of 1659 (Raleigh, North Carolina Museum of Art). The sitters in the present work are effortlessly elegant, accessible, and timeless in their appeal.

Maes was one of Rembrandt's most talented pupils and, while little is known about his earliest work, by the early 1650s he was painting biblical subjects and genre scenes in a style influenced by his master, among them the famous series of eavesdroppers. His genre scenes are better known today than his portraits even though he worked as a portraitist almost exclusively from around 1660. Maes's production increased dramatically after his move to Amsterdam in 1674 and, according to Houbraken, his adoption of the new style seen in here was due to the fact that 'he saw that young women in particular took more pleasure in white than in brown'. This picture has been part of the Cook family collection for generations, hanging in the Long Gallery at Doughty House together with Sassoferrato's Madonna and Child (see lot 18). The collection included other paintings by Maes such as the Young girl holding a basket of fruit, of around 1660, and masterpieces by other Netherlandish artists including Hals, Ruisdael, Rubens, Van Dyck, Schalcken, and Sweerts.