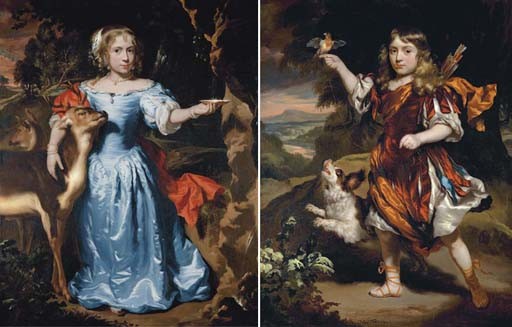 THE PROPERTY OF A GENTLEMAN (LOT 26)

These superbly preserved portraits are amongst the finest examples of Nicolaes Maes' portraiture. Dating from his last years in Dordrecht, before his departure for Amsterdam in 1673, they show the painterly softness and elegance of subject that exemplify Maes' finest portraits. His success in Amsterdam was such that, according to Houbraken, 'so much work came his way that it was deemed a favour if one person was granted the opportunity to sit for his portrait before another, and so it remained for the rest of his life.' The quality of his work was inevitably affected by that volume, and Maes' reputation has frequently been judged by that rather than by his early genre paintings and portraiture, which - as with the present paintings - are amongst the most masterful of his generation.

The bucolic, rather lyrical, representation of his sitters follows a popular theme in Dutch art that originated with the pastorals of Utrecht artists in the 1620s - themselves a reaction to humanist teaching of ancient texts, for example Virgil's Eclogues and Georgics, first translated into Dutch by Van Mander in 1597 - and was then further popularised by Rembrandt and his school. Rembrandt's pastoral works date from 1633 to 1646 and Maes only entered his studio in the late 1640s, but the young artist would have become very familiar with the genre through his contemporaries there. Hints of it appear in such works of the early 1650s as the Vertumnus and Pomona in the National Gallery of Ireland, the Woman of Samaria in the Russell collection, Amsterdam, or the Spanish Gipsy formerly in the Dreesmann collection, sold in these Rooms, 11 April 2002, lot 538.

The story of Granida and Daifilo was first written by Pieter Cornelisz. Hooft in Granida, his great tragi-comic play of 1605 (published 1615). The greatest master of the 17th-century courtly literary style, Hooft was arguably the only Dutch writer of his generation to capture the tone of Italian Petrarchan and French Plíade poetry. Granida, the daughter of an Eastern king and betrothed to Tisiphernes, loses her way out hunting; in the woods she meets a shepherd, Daifilo, who fetches water for her in a shell and falls in love with her; following her to court, he pursues his romance, until the couple flee to the woods to live a pastoral life where they are captured by others of Granida's suitors and held until Tisiphernes, moved by their love, renounces his claims and thereby allows the couple to be united.

The subject gained an enduring popularity amongst Dutch artists, affording as it did the representation of an attractive mix of princely, bucolic and oriental themes. A discussion of the theme in art (although omitting the earliest known depiction, by Honthorst in 1625, in the painting in the Centraal Museum, Utrecht), particularly amongst Rembrandt and his circle, was written by Sturla Gudlaugsson in the Burlington Magazine (XC, no. 549, December 1948, pp. 348-351; and XCI, no. 551, February 1949, pp. 38-41 and 43). Maes' familiarity with the subject can be readily inferred from his contemporaries' depictions of it, but his own first allusion to it seems to be the Portrait of a girl with an oyster shell at a fountain of 1662 (location unknown; sold, Christie's, London, 10 July 1987, lot 51). The representation as Granida should, however, be seen as only a reference in Maes' work - who was in any case prone to mixing motifs - designed to give an exotic or bucolic flavour, rather than specific representations; Daifilo is only loosely connected and more by association with the Granida motif, as in Hooft's play he should at their meeting be dressed as a rustic rather than as a hunter.

In the intervening decade after leaving Rembrandt's studio, Maes had concentrated on his urban domestic genre scenes and a restrained spare style of portraiture. That he did so is perhaps unsurprising: he had returned to his native Dordrecht in 1653 at a time when the States faction was in the ascendant, and the fashion for courtly elegance had passed. The correlation of politics and style can easily be overemphasized, but there is probably more than coincidence in this, or in the fact that the growth in the stately, elaborate mood of Maes' portraiture during the 1660s coincides with the growing influence of the Orange faction (it is interesting to note the occasional portrait by Maes that includes orange trees from the mid-1660s). The restoration of the House of Orange in 1672 caused a considerable growth of confidence in and demand for a more elegant, courtly style of portraiture; but this trend had been developing in the years before and the present pictures may be indicative of that movement.

In Maes' work in the years shortly before and after his move to Amsterdam, he began to develop the poses and motifs that were to become the mainstay of his protrait style. That is the case with the present compositions, aspects of which recur in various works of the period, although both may be regarded as their finest expressions. The Granida oyster-shell motif was, as noted above, used in the child's portrait of 1662, whilst the general pose of the boy and dog recurs in the Boy and a dog in a landscape also of 1662 in the Brighton Museum and Art Gallery and in similar form in the Group portrait of the Sykes family of 1664 in the Archiepiscopal Museum, Warsaw. Both the Granida motif and the boy and dog are also found in the remarkable Group portrait of a family in an Italianate garden of 1675-80 formerly in the Cook collection, sold in these Rooms, 8 December 2005, lot 21 (£792,000).

That Maes was pleased with the present grouping of motifs (deer and shell held to the fountain; and leaping dog and bird on hand) is suggested by their inclusion in two separate portraits of boys also of 1671 (both location unknown; see Krempel, op. cit., pp. 304-5, nos. A115-6, figs. 202-3), the oval, half-length portraits of Adriana Six and Frans Six of 1674; and two further separate portraits of children of 1675 (ibid., pp. 315-6, nos. 170 and 171a, figs. 244-5); as well as the Cook group portrait. Of those, however, only the Cook picture compares with the present paintings in their combination of grandeur of design, charm and quality of execution.