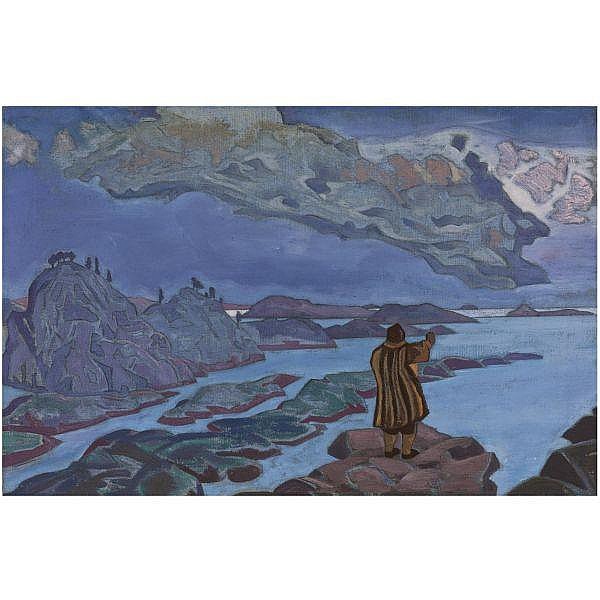 signed with artist's monogram in Cyrillic l.r. tempera on canvas

PROPERTY FROM AN IMPORTANT COLLECTION, MASSACHUSETTS
This painting is a variation of one from the Heroica series, which was completed in 1917 (fig.1). The original Command was sold soon afterwards, but Roerich believed that the message it carried was so important that a second version--the painting offered here--was painted and included in the exhibition of his works that toured US cities from 1920 until 1923. The Command is a poignant, personal statement of the artist, conceived amidst the collapse of countries and values, and in the face of all-engulfing chaos and destruction. We are left to ponder whether the command comes from a man, crying out to the Heavens to stop the madness, or from the Heavens, challenging him to continue striving. Perhaps it is a command given by Man and Heaven together, united in a supreme effort to rein in the forces that threaten the very existence of both. As in so many of his previous works, he expresses the past as the source of true values and strength, this time through the depiction of the ancient garment of the figure. In this later version, Roerich finds a closer connection between the figure and the mountainous, imposing clouds, as the man's hand and the lines of rocks both recede into the distance. The darker shades of blue cast a mood that is more expressive, enhancing the sombre and powerful atmosphere. The Command is an example of Roerich at the height of his prowess, as he uses his art to convey an emotionally stirring concept. We are grateful to Gvido Trepša, Senior Researcher at The Nicholas Roerich Museum, New York for providing this note.