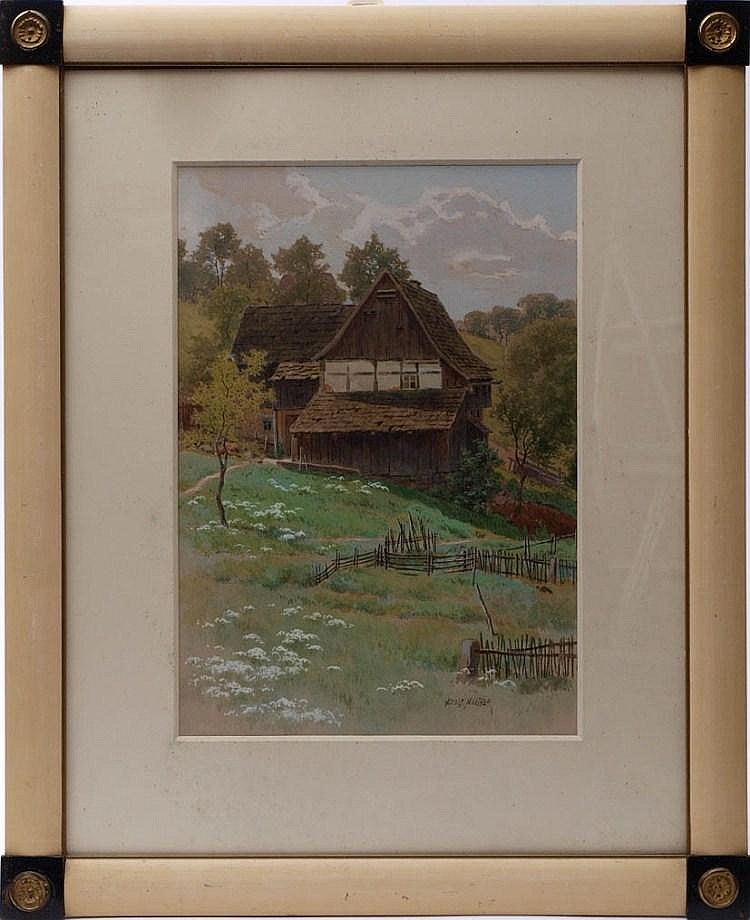 This is a courtesy translation. The german version (see below) is binding.

By personal, written or telephone participation in an auction held by Auktionshaus Bloss, the following terms and conditions are accepted:

2.) The catalogue descriptions are made to the best of the author´s knowledge and belief but are not part of the contractually agreed properties and conditions of the items. The descriptions are based largely on information given by the consignor. Descriptions of condition are meant as indication for damages which are optically serious in the author´s opinion. Defects, faults etc. are accounted for in the limit prices. The items are auctioned in the condition in which they are in the moment of knockdown. If an impairment of the item´s preservation is not stated, it does not mean that the item is in faultless condition or free of defects or faults. During the preview there is sufficient time and opportunity to view and inspect the items. A client´s defence not to have visited the preview does not entitle him to later complaints. The auctioneer assumes no liability for catalogue descriptions, age, provenance, size, weight, signatures, marks, material and damages; in particular, this information does not constitute a guarantee in the legal sense of the term. However, the auctioneer agrees to communicate duly stated defects to the consignor within the defects liability period if possible. In special cases, e.g. a suspected counterfeit, the auctioneer agrees to pursue the buyer´s claims against the consignor if possible, but only if the buyer presents the expertise (made at his own expense) of a recognized expert within four weeks after the auction.

3.) Books, journals, documents and the like are not collated.

4.) Signatures, marks and the like are read off but not checked; error reserved. Attributions and references are expressions of opinion and no guaranteed qualities. In any case, we recommend that you check yourself and avail yourself of the opportunity of previewing. Damages on frames are mostly not mentioned. Dimensions are rounded. On images of paintings or prints, the frame may not be pictured or the frame width may be cut in favor of the image size. Images are exclusively for the purpose of additional information; error reserved. In case of inconsistency between image and text, the text is authoritative. If an article description exists in more than one language, the german description is authoritative.

5.) Complaints of any kind whatsoever cannot be considered after the auction. Defects liability is excluded.

6.) During preview and auction maximal caution is recommended since every visitor will be held responsible for any damage caused by him.

7.) Initially, each object is called with the limit price mentioned in the catalogue (unlimited objects will initially called with ? 10,-), unless there is more than one higher absentee bid. Up to ? 50,-, the bid increment is ? 5,-, over ? 50,- approx. 10%. The knockdown shall follow after the highest bid has been called three times if the limit price has been reached. The auctioneer can reject bids. If a bid is rejected, the bid made immediately prior to it shall remain binding. If several bidders make the same bid, the matter will be decided by drawing lots. A disagreement about the last bid or a knockdown may be solved by auctioning the item again. This applies also if a bid has been overlooked. A telephone bidder automatically bids the limit price, even if the telephone connection cannot be established when the item is called. If the highest bidder does not want to accept his bid, the auctioneer can knockdown the item to him nevertheless or auction the item again. The knockdown pledges to purchase and payment. With the knockdown the risk of loss, damage, mix-up etc. passes to the buyer.

8.) Bids with awards subject to reservation are binding on the bidder for three weeks. Notwithstanding, in the event of a subsequent bid equivalent to the limit, the lot number may be knocked down to another bidder with no further consultation being required. Every knockdown in the auction with a hammer price less than the limit price is a knockdown subject to reservation, even if this is not expressly announced.

9.) Every bidder buys in his own name and for his own account. If a bidder buys by order of a third party, he is personally liable for purchase and payment even if the invoice is issued to his contractor. The full purchase price is due immediately after knockdown and must be paid in cash to Auktionshaus Bloss on the day of the auction. In the case of buyers who have submitted written, telephonic or internet offers, the amount due is payable within ten days after the invoice date. In the event of payment delay, the buyer must pay default interest following §288 BGB; the auctioneer reserves the right to lodge further claims for damages. The purchased items will be handed over only if all outstanding accounts have been settled in full. The time of payment receipt is the date of receipt on Auktionshaus Bloss´s account statement resp. the credit date of the cheque.

10.) If the buyer wishes to have the purchased items shipped after payment, the shipping condition stated in par. 17 apply. In the case that items are not paid and collected within ten days after the invoice date, the auctioneer reserves the right to store the items with third parties at the cost and risk of the buyer or to charge ? 1,- up to ? 3,- for storage per day and item.

12.) The knockdown pledges to purchase and payment of the full price to the auction house. With the knockdown, possession and risk pass to the buyer; ownership passes to the buyer immediately after full payment.

14.) If Auktionshaus Bloss auctions objects of the Third Reich, it does so exclusively for purposes of civic elucidation, defence against unconstitutional attempts, art or science, research or education, coverage of events of the day or history, or for similar purposes.

15.) The auctioneer can exclude any person from an auction if there is a valid reason, especially somebody who disturbs the auction or preview or who is delayed in payment or purchase.

17.) If absentee or telephonic bidders would like to have the bought items shipped, we ask for a written order. The items will be shipped exclusively and in every respect at the risk of the buyer. Shipping costs are calculated according to weight, time and effort. Every parcel shipped inside Germany is insured up to ? 500,-; for this reason we ship even very small objects in a parcel. If the buyer would like to have a parcel insured with a higher sum (which will be done at his expense), he has to inform the auctioneer beforehand in writing about this. Items are only shipped in a parcel up to a parcel size of 60x50x100cm. Paintings, glazed prints, voluminous and breakable groups of objects, easily breakable items such as services etc. will be shipped for the buyer´s account via forwarding agency only.

18.) These terms and conditions apply accordingly to the freehand sale, too.

19.) The place of fulfilment is Merzhausen, the legal venue is Freiburg. German laws shall apply exclusively.

20.) If one or more provisions of these Terms and Conditions are wholly or partially invalid, the validity of the other provisions will remain in full force and effect.

For any payment by credit dard, we will charge a payment fee of 4% of the amount due.