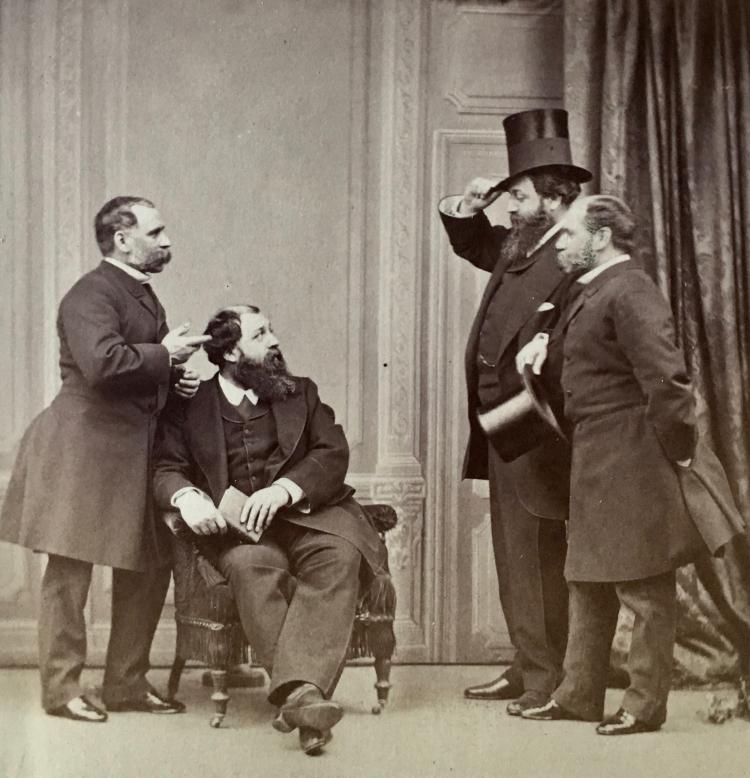 Olympe Aguado and others (XIX)

Olympe Aguado and others (XIX) Album composed of 490 photographs of members of the Spanish, French and Chilean high society, 1850-1860 Albumen prints, measurements of photographs 22.5 x 30 cm and below, measures of the album 28 x 40 cm

Olympe Aguado between the document and the staging composed by an album made up of 500 photographs, many of them made by Olympe Aguado, between the end of 1850 and the beginning of 1860, in which he illustrates the relations of the French, Spanish and Chilean high society . His photographic positioning was related to two of the major trends of the 1860s, with the debates between naturalism and fiction. His work evolved from documentary practices to staged photography. On the album there are self-portraits of Olympe Aguado, portraits of Eugenia de Montijo, Prince and Princess Ponatowski, Princess Anna Murat, Duke Pasquier, members of the Aguado family and the Arcos y Arjona family, Duquesa de Ferrán Núñez, Countess of Sclafani, Countess Lehon, Duchess Pasquier, Conde de Fuentes, Count of Galve, Marquis of Miraflores, Marquis of Vilaseca, Camilo Amesaga, landscapes of Bois de Boulogne, Chateau du Sassy,... and tableaux vivants. In the album there are also photographs in carte de visit of Disderi, Kent, Laurent, Mayer and Pierson, Levitsky, Hebert, Alonso Martínez and Hermanos, Bertrall, Maujean, Vallet and Cia, Maouri, C. Baldwin, Reutlinger, Franck, among others, of Napoleon III, Eugenia de Montijo, Isabel II, Francisco de Asis, Alfonso XII, Prince and Princess Panatowski, Princess Anna Murat, Duchess of Ferrán Núnez, Marqués de Miraflores, Marqués de Vilaseca, Camilo Amesaga, Juan Prim, Count of Reus and his son, Dukes of Osuna, Dukes of Sesto, Duchess of Rivas, Marquise de Campo Real, Count of Oñate, Counts of Sclafani, Countess Lehon, Duchess Pasquier, Count of Fuentes, Conde de Galve, ..

The paper of the Art

Terms and Conditions
By submitting your bid, you agree that:
You have read and agree with the Auctioneer Terms and Conditions below and the Invaluable Terms of Use Agreement
You agree to pay a buyer's premium of up to 20 % and any applicable taxes and shipping.